There are a three weeks to go for the Bangalore’s graduate constituency election – the one in which only graduates can vote. The candidate elected from this constituency will become a member in Legislative Council (MLC), the upper house of Karnataka’s state legislature.

With election scheduled for June 10th, candidates are campaigning intensely. In addition to the three mainstream political parties that usually participate in this election – BJP, Congress and JD(S) – the Andhra Pradesh-headquartered Lok Satta party has entered the fray this time. There are also independent candidates.

Ramachandra Gowda (BJP)
Gowda,74, is the incumbent MLC from Bangalore graduate constituency. He has the record of being MLC from here continuously for the last 24 years. The term of an MLC is six years, and Gowda has been winning this election for the last four terms (since 1988). His current term ends on June 21st. Gowda describes himself as an agriculturist and engineer, and has BSc, BE and FIE degrees. He is from Kunigal, Tumkur.

Gowda’s campaign pamphlet says that he became active with the RSS in 1947. In 1970, he was elected BBMP corporator. He is also listed as a founder member of BJP in the city – he was the first city BJP President.

Gowda was first elected minister in the JD(S)-BJP coalition government in 2006. He was minister for planning, lottery, small savings, and science and technology.

Gowda’s last stint in the cabinet was as medical education minister in B S Yedyurappa’s government. In 2010, he was forced to resign after being accused of irregularities in staff recruitment in medical colleges. A few days after the resignation, Gowda was appointed Deputy Chairman of State Planning Board. He resigned from this position last week as he was contesting in election.

Though recruitment scam is a talking point for other candidates, Gowda is unfazed. “There is no scandal. Court has ordered that those appointed can continue. I am not worried that this issue will affect votes – public memory is short,” he says. Gowda is confident of winning the election. A firm Yedyurappa loyalist, he says, “I am second in line to Yedyurappa, and my performance speaks for itself.” He says he is not even aware who the other candidates are.

As per his campaign pamphlet, Gowda won ‘Best Legislator’ award in 1994, and has pushed for development of lakes and provision of more holidays to government/PSU employees. As medical education minister, he has increased student stipends, increased government medical seats in private colleges, developed infrastructure in new hospitals. The pamphlet says that he has established an intensive care unit (ICU) in Victoria, Bowring and Lady Curzon hospital. On what he would do if elected, Gowda says, “I will repeat the kind of work I have done so far.”

Ramoji Gowda (Congress)
The Congress party is fielding Ramoji Gowda (aka Ramojam), 39, a retired primary school teacher from Anekal. Unlike Ramachandra Gowda, Ramojam is new to politics. A post graduate in political science, he took voluntary retirement three years back, to be a full-time politician.

He has been office bearer for associations of primary school teachers, government employees etc., and much of his support comes from these segments. He was also former President of Karnataka State Graduates Forum. Ramojam’s work, as mentioned in his biodata, has been on distributing books and uniforms to school children, organising blood camps, etc.

Ramojam says that, if elected, he will work on environmental conservation, improving literacy and controlling population growth. “I will focus on these, along with graduates’ problems such as unemployment, low salaries, discrepancy in salary scales etc. On city’s water issue, I will push to ensure that Rain Water Harvesting is compulsory and work on identifying other water sources. We cannot control migration or growth of industries, so these are the only options.”  (Rainwater harvesting is already compulsory.)

He was the Congress candidate in the 2006 election. JD(S) had propped up Upendra Shetty as its dummy candidate in that election as BJP-JD(S) coalition was ruling the state then.*

Deve Gowda had also contested from Bangalore teachers’ constituency – wherein only teachers can vote – in 2003. A Congress candidate then, he was defeated by Puttanna of JD(S) by a narrow margin. “I moved to JD(S) as it has done good work in education sector, and is a clean, secular party. As CM, Kumaraswamy started professional colleges and women’s colleges in rural areas,” says Gowda.

Like Ramojam, Deve Gowda’s vote bank is also teachers and government employees, as he has been office bearer in their associations. He started his career as an assistant in secretariat, and voluntarily retired as Section Officer after 16 years. In the meantime, he started his own educational institution, Darshan Education Trust,  in 1979. For the last four years, he has been a lecturer in political science, in the Trust’s Darshan First Grade Degree College, Prashanth Nagar. He is also Director of state Vokkaliga Sangha.

Gowda and his supporters say that his best work was solving teachers’ problems during the SM Krishna government (1999-2004). “As office bearer in associations, I got government to increase promotion rate, salaries and medical allowances of teachers. I also helped schools get grants,” says Gowda.

He says that if elected, he will focus more on graduates’ problems. “There are MLAs and corporators to look after general issues. This is graduates’ constituency, so I will focus on graduates’ unemployment issues, teachers’ problems on salary scale disparity, low salary in unaided schools etc. Retired government employees also face issues of pension and benefits,” he says.

On water scarcity and city’s growth, Gowda says that migration into the city should be controlled. “Sub-cities should be developed in Kanakpura, Magadi, Nelamangala etc. Other district headquarters should also be improved so that growth is evenly distributed.”

Ashwin Mahesh
ABIDe member Ashwin Mahesh is contesting as Lok Satta party’s candidate. Mahesh was elected as candidate through a preliminary election within the party. He has been the only candidate to have public campaigns and endorsements, while other candidates have been campaigning in select organisations. He is also campaigning strongly with the IT community, where there is better reception for reform politics, and uses social media, unlike other candidates.

Mahesh has a degree in physics, MBA, MS (Master of Science) in astronomy and Ph.D in geophysics. Having worked in NASA in US for six years, Mahesh returned to Bangalore in 2005. He has since worked with government agencies to improve governance and infrastructure.

He has also founded social technology company Mapunity and is co-founder and editor of national affairs e-magazine India Together. He has worked with India Against Corruption (IAC) movement for introduction of Jan Lokpal Bill.

Mahesh has been campaigning with the agenda of increasing citizen participation in governance. He says that there is a ‘new India’ that directly engages with public problems because it has the economic means, along with tools like social media, to do this. “New India does not mean urban Bangalore alone. We saw this group rise during the IAC movement,” says Mahesh. He says there is sufficient number of ‘new Indians’ to vote for the change in governance that he and Lok Satta advocates.

Mahesh says that, if elected, he will push for proper implementation of Community Participation law and for Bangalore Metropolitan Regional Governance Bill (both of which promote citizen participation) to be tabled in both houses. “I will push for community-management for lakes. I will maintain a public record of all my votes in the Council and will try to blog about my work so that citizens can see the policy-making and implementation process.”

About the city’s water crisis, he says that this is due to three follies – not tapping local lakes for supply, not pricing BWSSB water properly, and not tackling the water mafia. “I will push for a regulator for the water sector, similar to power. I would push for pricing of borewells according to water extracted, for adoption of dual piping in all new communities, and for a proper set of water reuse guidelines,” he says.

Nagalaxmi Bai
A Kannada journalist for the last 23 years, Nagalaxmi Bai, is contesting as an independent. Most recently she was known for filing a PIL (Public Interest Litigation) against Chief Minister D V Sadananda Gowda for illegal use of his BDA-allotted plot in HSR Layout.

Nagalaxmi, 50, says that she decided to contest as an independent as no political party is free from corruption. She has also filed a PIL on BBMP’s misappropriation of Rs 1539 cr from three wards that was revealed last year; her team has also filed a case in Lokayukta against Home and Transport Minister R Ashoka alleging illegal denotification of land.

Nagalaxmi is a postgraduate in Economics, graduate in law, and has a diploma in journalism. She has worked with organisations like Prajavani and Doordarshan, and is currently Chief Reporter at a news agency Kannada Suddi Samsthe. She has authored five books with subjects ranging from corruption to female foeticide. She has also been member of Central Film Certification Board. 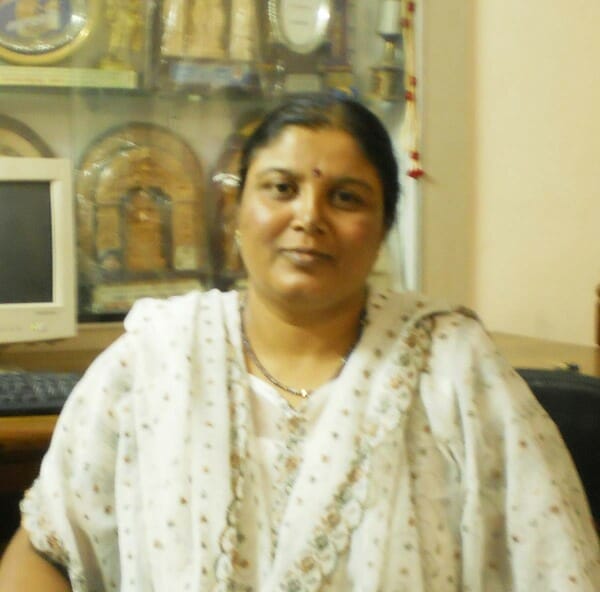 Not worried about being an independent, Nagalaxmi says that Ramachandra Gowda is her only competition. “I have been working with grassroot population for long, and fighting against social ills and corrupt politicians despite threats. I have a clean record. I have been active in media and people know me,” she says.

Nagalaxmi is taking a different line from Ramoji Gowda (Congress) and Deve Gowda (JD(S)) who are campaigning with teachers. She has been campaigning strongly in rural areas of the constituency and says that she will work for graduates from these areas and from other districts. “Many graduates in the city are  from city outskirts and other districts of Karnataka. Rural graduates would have mostly studied in government schools, and have difficulty competing here, especially for IT/BT jobs. I will focus on education and employment of these sections, along with salary problems faced by teachers,” she says.

She says that she will also focus on women’s issues such as lack of safety, discrimination and female foeticide. “Women are expected to compromise for family and are harassed otherwise. Awareness should be raised on this, and counselling given in such cases. Women should be encouraged to contribute to society.”

Regarding water crisis, Nagalaxmi says that use of BWSSB water for private building construction should be stopped. “There is too much migration, so MNCs should go to smaller towns. We do not need IT/BT companies, they do not cater to local people in need”, she says. ⊕

The CPI(M) candidate is K S Lakshmi, 41, a post graduate in Economics from Bangalore University. She is state General Secretary of CPI(M)’s women’s wing AIDWA (All India Democratic Women’s Association). She has been a senate member of Bangalore University and state President of SFI (Students Federation of India) before. She was endorsed by CPI(M) politburo member Brinda Karat in April.

Lakshmi says that she might have enrolled around 13,000 new voters – she and the party’s 20 teams meet graduates. “We have had constraints as a big budget is needed for campaigning. Election Commission itself should get graduates enrolled, and distribute information on candidates,” she says. She says that the impact of globalisation is visible – “Education is too costly, there are no salary hikes or job security, suicide rates and gender discrimination is high – these are common people’s issues, and I have been campaigning on these.”

* Article corrected June 14th 2012. Deve Gowda was incorrectedly reported as the JD(S) candidate in the 2006 MLC election. He had contested from the Congress party.