"…24/7 water supply, generator back up, general physician round the clock, two-bed hospital. Book now to avail of early bird offer", my husband read off the newspaper.

"What is it about, a new apartment block?" I asked.

"No-it’s an old age home", he said, "time we started investing in one, when we can still afford it".

I looked at myself in the mirror, and plucked out a strand of grey hair which refused to be dyed. "Why, don’t you think we’ll be living with our son’s family when the time comes?" I asked, unsure of it even as I did. For these were days when family ties were considered passé, when children flew the nest never to return, or set up their own homes in a bid to give and have ‘space’ and independence for everyone concerned. Parents could no longer take their children for granted, and had to be prepared to live by themselves if they wanted to preserve their dignity, not to speak of sanity.

"But we’ll still have each other, right?" I ventured. "So why do we need to go to an old-age home? I find the idea distasteful".

"It’s fine when we are healthy and have each other. What happens when we are not? It’s better to be in a place where we are physically cared for, at least. Then I will rest in peace, knowing that you’ll be mistress of your own TV remote and are being fed proper meals at correct hours."

I found myself reluctantly agreeing, to what was to me, a disagreeable state of affairs – that was the level of acceptance (cynicism?) that was creeping into the psyche of society. Symbiotic existence had given way to mutual distrust among family members. Children no longer felt obliged to care for their aged parents, and parents no longer expected it of them either.

Most new age parents, who had survived the joint-family system and didn’t care much for the experience, craved for independence. Day-time TV soaps and ads for insurance didn’t paint a rosy picture of old age either, the former plunging the system to depths of indignity and the latter stressing on the benefits of physical and financial independence. Did one really have a choice?

"OK, maybe we should look at it. What else does the ad say, about the scheme?" I asked.

"Only that the home nestles among sylvan surroundings in a quiet suburb of Bangalore. You need to make a down payment of Rs. 5 lakhs for a booking in 2020. Should we look at it?"

The conversation triggered unpleasant thoughts in me. When my son bounded up to me for pocket money for a college outing, I caught myself wondering if this apple of my eye would really abandon us and walk into the sunset with his wife/girlfriend/boyfriend. What if my daughter-in-law (if we were lucky) insisted on living separately because she didn’t like my cooking? Or maybe she’ll also have a full time job and leave all the household chores to me, plus expect me look after their toddler.

Worse, what if my son went abroad and got hooked on to a foreigner of unspeakable pedigree? Good god, what if me and my husband developed BP, Diabetes, Arthritis, Osteoporosis and the rest of the diseases in the lexicon of modern medical jargon or got confined to a wheel chair? What if what if what if…?

Soon, I had worked myself into a lather about imagined threats waiting in the wings to wreck my life, and was relieved when my friend called to invite me for lunch. It was the family’s latest grandchild’s naming ceremony, and I actually sympathised with the parents who were bound to be abandoned by the newborn in about 20 years time. "I should tell them about the old-age home so that they get the early-bird benefit", I thought.

The delicious south-Indian lunch was served traditionally on a banana leaf, with family members themselves going around with water and pickles. The mango pickle, in particular, was finger-licking delicious, and I asked my friend to get some for me from the caterer. "Oh- I’ll give you an entire bottle", she said." My grandma has prepared plenty of it, enough for the entire family".

I looked at the said grandma with interest, admiring her enthusiasm in preparing pickles in this day and (her) age. An upright old lady with bright eyes was rocking the newborn in her wrinkled arms. "Is she the baby’s grandma too?" I asked. "No, she’s his great grandma. She is 84 years old" said my friend, knocking me out of my chair. "She also gave the baby and his mother the old-fashioned oil-bath for a month, and cooked special food for her for three months. ‘Paati’ is always there to look after such things", she said with affection. 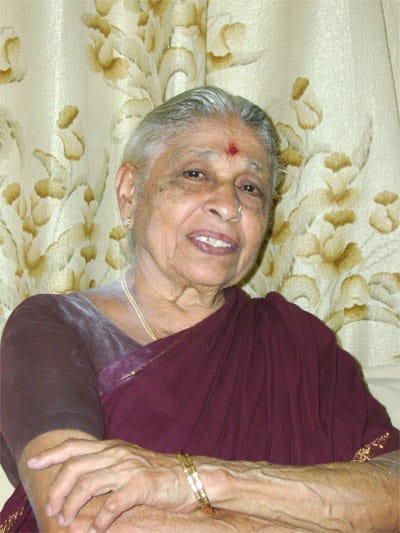 That was when I decided to get to know Jayalakshmi or Paati (grandma in Tamil), the amazing woman who seemed to be the epitome of energy, enthusiasm, dignity and spirit. Hailing from a traditional but extremely progressive south Indian family, she was highly educated for her times (‘10th pass’).

Her two sons and a daughter settled in America early, and her three other daughters are settled in Mumbai and Bangalore. She lost her husband more than a decade ago, but Paati lives in solitary splendour in her sprawling bungalow in a Bangalore suburb, where I met her for a chat. She cooks for herself, washes her own clothes, shops for her milk and vegetables and moves around in public transport.

"Why?" I ask her, unable to fathom her motivation for living alone at her age when so many family members, apparently, were willing to have her.

"It is better to be independent – all of them have their lives, and I have mine. We visit each other often, and that’s enough. And I know they’re there for me when I need them", she says simply. Paati spends the day going about her chores, sometimes having relatives over and cooking for them, watching TV serials (which make her marvel at the scheming saas and bahus) and making loads of papads and other munchies to distribute to her adoring brood. Not a moment does she feel insecure or abandoned by life or her people, she says with equanimity.

What’s more, her two sons are married to foreigners, the younger one to a Jew. And Paati gets along famously with them. They love having her over too, and abstain from cooking non-veg for the length of her stay. When in Boston she gets into Nike shoes, nine-yard saree and all, and walks around the block for exercise, and dishes out delicacies from her repertoire for them.

‘Did you find it hard to accept your foreign daughters-in-law?" I ask her curiously.

"I was hurt a little when my eldest decided to marry a foreigner, but then, it was ok." she says. "My husband advised me to just let it be". So when the second son decided to follow suit, Paati didn’t bat an eyelid. When in India, her daughters-in-law stay with her, and walk around in shorts unless visitors are expected. And Paati is perfectly ‘kosher’ about it.

Her elder daughter-in-law was a divorcee with a daughter when she married her son, and Paati has accepted her child as a grand daughter too …she recently gifted her great-grand-daughter a pair of anklets on her birth. Now her grandchildren look to Paati for support when they need to take tough decisions like to marrying out of their caste and other issues.

Sprightly, upright, with good hearing and eyesight, and just a hint of sugar and blood pressure – Paati was a lesson in the art of living. They don’t make ‘em like that anymore, I thought. Here I was, a healthy, middle aged working woman wallowing in self-pity and fretting over a doomed future, and an extraordinary 84-year-old lady, whose life didn’t even follow the beaten path by Indian standards, had got on top of it. No anger, no remorse, no expectations, no insecurities, no dependence, no conflict – only a zest for life, deep understanding, and glorious acceptance.

What’s the secret of her inner strength, I ask her, expecting her to recommend a righteous lifestyle with a few rigorous spiritual practices thrown in. But Paati has no platitudes to offer. Her life, lived, was her most compelling statement. Our grand and glorious masterpiece is to live suitably, said renaissance writer Montaigne, and Paati was doing just that, with no fuss and drama and politics.

As I headed home with a lighter heart that evening, a T-shirt slogan on a gum chewing youth caught my eye. ‘Dude, it’s the Attitude’ it declared, and the profundity of the statement hit me. Life rarely sticks to the script that we wish for ourselves, and its left entirely to us if we decide to make lemonade out of the lemons that we are handed out, or crib about the unfairness of it all. I’m sure there are hundreds of women like Jayalakshmi Paati with the right attitude, leading a life of quiet dignity, for the reticence of the Indian woman is legendary. And I was glad I had met one of them.

At home that night, hubby waved another form at me “Hey, want to sign up for the Save the Earth Campaign?” he asked. “We have to fight global warming”. “Sure”, I smiled, still heady with the Paati effect, “but how about some ice cream right now, before it melts?” ⊕

“Draft Mobility Plan based on faulty data, is financially unviable”

The draft Comprehensive Mobility Plan is problematic from the legal, technical and financial perspectives

The Environment Protection Institute conducted a training session on teaching methods and environment protection which saw teachers participating from various schools in Bangalore.