Slumdwellers here have been facing acute water shortage for the past three months. The two bore wells in the slum are sufficient to satisfy the water needs of the people. But the motor which pumps water stopped working and this broke water supply.

“We have to travel three kilometers daily for getting water from Austin town. We take bath only once in a week due to the water shortage. Some time we may not get water that force us to buy water for higher prices,” said Habeeb A S, a local resident. 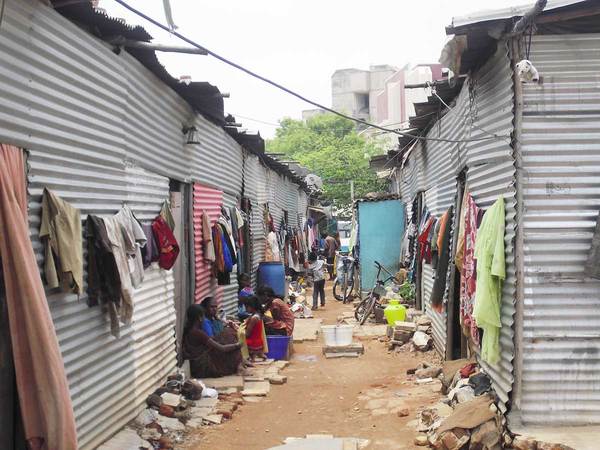 “We have to be in queue for hours to defecate. 6,500 people are using less than ten toilets so there will be mess in the morning. We have complained to the corporation but were of no use,” says Louis X, 41,  President of B R Ambedkar Youth Social Welfare Association.

Waste collection has also stopped and this is making matters worse. Slum association spoke to BBMP garbage workers and realised that cleaning activities were stopped due to non payment.

However BBMP Superintendent Engineer Govinda Raj defended it and said, “We are giving sufficient payment to all the cleaning staffs. If the contractor has not paid we are not responsible for that. We will take a look at the problems over the slum and will take necessary action very soon.”

There are around 1500 houses in the Ejipura slum. These people have been living here from more than thirty years. As it is a declared slum, BBMP was supposed to provide aid for the welfare of this slum. But by citing shortage of funds, BBMP in 2004 invited tenders from private parties for constructing houses (Economically Weak Section quarters or EWS) for the residents here.  Maverick Holdings and Akrithi Nirman Ltd battled for acquiring the tender in court. The seven year long saga finally ended up with the High Court ordering the tender to Maverick on 21st Nov 2011.

When Citizen Matters asked about the construction of quarters for slum dwellers, BBMP’s Raj says, “We have already signed an agreement with Maverick Holdings. If they failed to start works shortly, we will take necessary action against them.”

Meanwhile, the residents of Ejipura slum are forced to live in unhygienic conditions without getting sufficient water for their daily needs.⊕

Roofless, for a verdict they wait
A weekend at Ambedkar Nagar slum

State government is planning to soon enact the BBMP Bill for Bengaluru’s governance. But the city’s growing problems cannot be solved with the current governance structure or by merely increasing the number of wards, as envisioned in the Bill.

There were many reasons for traffic congestion around Gandhi Bazaar, but evicting street vendors was seen as the only solution. Now, traffic is still messy here. What really could have been done?