Less than four months since a High Court order barred commercialisation of residential areas in Bangalore, flouting the verdict remains the norm.  The HC had ruled in January this year on a petition filed by the Citizens’ Action Forum (CAF) and 12 other individuals. The petitioners, some of whom are from Koramangala, had challenged the BDA’s Revised Master Plan 2005-15 (RMP) for allowing commercialisation in residential areas.

The January 27 verdict barring shops in residential areas surprised the residents as there was a big question about its implementation. The RWA members and lawyer Aditya Sondhi had second thoughts about the execution of the new law.

People continue to convert their residential apartments and bungalows into bookshops, restaurants and coffee joints. Many of these shops are operating without trade licenses from the BBMP to carry on their activities.

Atta Galatta, a book shop-cum-cafe was set up in a residential area in Koramangala 1st Block after the High Court’s ruling. The business does not yet have a trade license from the BBMP to commence the trade.  Subodh Sankar says, “We are still waiting to get the trade license from the BBMP. We have not started any trade yet. And we will not be starting it till we get the license issued.”

But when the reporter visited the centre, the building was open to commercial activities like the activity centre and selling books. When asked what will be done to the building if the trade license is not issued, he said that he had not thought about that. 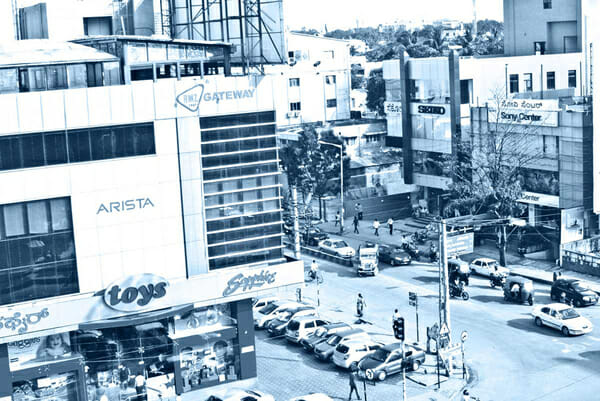 Top view of the Inner Ring Road intersection with the Koramangala 80 feet road connecting Vivek Nagar to Sarjapur Road. Informally called the Sony World junction. Koramangala has a thriving economy with an affluent demography. It is the inner neighbourhoods roads that are now seeing businesses crop up, and this is has ticked off residents. Pic: Nagashree Gururaj.

In spite of the ruling, BBMP has not put a check on the situation. A B Hemachandra, Joint Commissioner (South) of BBMP agreed there are some establishments flouting the norms. He adds, “no commercial establishment will be allowed in the residential areas and we are going to take action soon.”

According to the CDP (2005-15), only 20% of the total area of a residentially zoned plot can be used for commercial purpose. And for eateries and food joints, 75 sq.m of the floor area should be set up as parking space.

Many establishments do not have a parking space and use their basements for other activities. Barbecue Nation for instance uses its underground parking space as a storeroom for meat and other food products. This is causing parking congestion around that joint for the residents. A senior employee at the restaurant claims that they will remedy this soon.

S Murlidhar, RWA President of Koramangala 1st Block says that they have written a lot of letters to the BBMP and Health officers. These officials have agreed that some establishments have been violating CDP norms and have confirmed that some action will be taken against them.

Joint Commissioner Hemachandra did not have much to say about this situation either, apart from claiming that BBMP has set up committee to check the violations.

However, Citizen Matters had already exposed last year that BBMP had shutdown a critical call centre that was receiving complaints about building bye law and CDP violations in city.

Meanwhile, BDA has started work on the RMP (2016-2035) and has called for inputs from general public for the same.⊕

Water, waste, infrastructure – all the news from last week you must know about Bengaluru, in one place!

In an exclusive interview to Citizen Matters, MLA of Mahalakshmi Layout expresses his unhappiness about the inadequacy of the LAD funds.

After years of public pressure, Bengaluru’s suburban rail project is gradually taking off. But confusion prevails as the project details are still being worked out.