The deadline for removing films has now been extended to June 5th.

From May 20th, no vehicle in the city is supposed to have films plastered on its safety glasses, as per the recent Supreme Court ban. While Bangalore Traffic Police (BTP) is all set to fine offenders, vehicle owners in the city are rushing to BTP’s centres that offer to remove the films for free, as well as private garages.

While private garages are charging as much as Rs 350-500, even BTP centres do not remove films for free. BTP had started service in 10 centres from May 10th. Hundreds of vehicles are coming to each centre, wherein only about 10 policemen remove films.

A officer at Adugodi traffic police station said, on condition of anonymity, “Some 100-200 vehicles come daily, and there are only 7-8 officers to work on them. Police is not skilled in this work; their hands ache because of many days’ work.”

The overworked cops are seeking help from others. In the centres, there are people who remove films at the cost of Rs 50-100. In Indiranagar BDA Complex, one of the BTP centres, workers from shops in the complex are helping police.

Mohammed Shariff, who works in a juice shop here, removes films. “Traffic police asked us to help out. We accept whatever amount people give us.” Shariff teams up with another employee from a nearby xerox shop to work on cars. 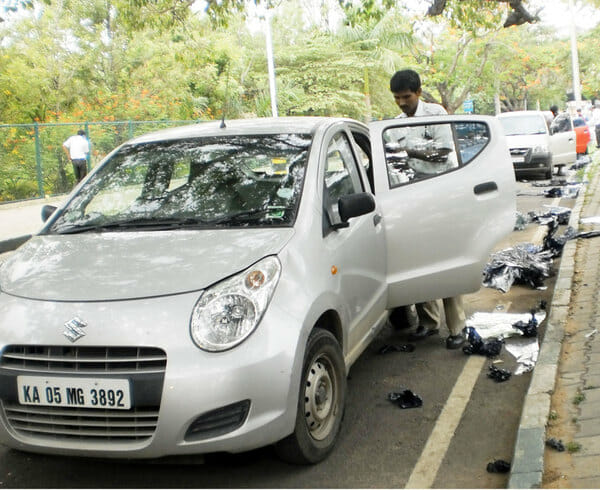 While many car owners did not complain, some were miffed about having to pay. Sadashiv, an Indiranagar resident, says, “If they are asking for money, I might as well remove the film myself from home.”

Murthy, who is in-charge of parking in the complex, says, “There are only 12 traffic policemen to deal with over 500 vehicles that come here daily. It takes about half an hour to finish work on one car. For older cars, it takes about an hour. It is impossible for police to work on all vehicles.”

Garages are doing brisk business, because of the crowded traffic centres. According to Transport department, there are about 7 lakh cars in the city, and 98% of them have films on glasses.

There are some who manage to remove the films themselves. Sooraj, Manager at an MNC, says, “It takes about an hour to remove the film yourself, especially if the car is new. When I checked three garages in Whitefield, they were charging Rs 250, Rs 350 and Rs 500.” Automotive websites also have Do-It-Yourself instructions on removing films.

“Violating VLT (Visual Light Transmission) rule is a minor offence and will invite penalty of Rs 100 the first time, and Rs 300 for repeated offence. Police can get the film removed from the vehicle also. If caught for the third time, license can be suspended,” says M A Saleem, Additional Commissioner of Police (Traffic).

RTOs will also enforce the rule through their squads. A senior Transport department officer says, on condition of anonymity, “There will 68 RTO squads to track offenders. This will be effective only if film is removed, along with penalty. We will decide on exact procedure after finding how many people have complied with the rule by 19th.”

What does the rule say?

On April 27th, Supreme Court ruled that no films or other materials can be pasted on safety glasses of vehicles. The order differentiates between films pasted on glasses, and tinted glass itself fitted by vehicle manufacturers. Tinted glass is allowed, while films are completely banned. The order became effective from May 4th and is already being enforced in parts of the country.

Court made this ruling on a PIL filed by an individual Avishek Goenka. Goenka, in the petition, had sought the ban on black films saying their use aid crimes like kidnapping, sexual assault and terrorist acts. Tinting also increases the risk of accidents, he said.

The central Motor Vehicle Rules, 1989, already defines VLT allowed for vehicles. VLT indicates the amount of light that can pass through glass; higher the VLT, higher will be visibility. Rule 100 of MV Rules say that front and rear glasses should have VLT of at least 70%, while side glasses should have at least 50% VLT.

In the petition, Goenka had challenged the MV Rule itself, saying all vehicles should have 100% VLT. He submitted RTI replies from police departments in some states like Tamil Nadu, Delhi etc. who opined that black films should be banned since they aid crimes and help criminals hide during inspection at police check points.

The apex court said that it did not have the authority to change the rule itself. But it interpreted Rule 100 to say that only manufacturer can make tinted glasses of specified VLT and that VLT cannot be altered later. VLT can be measured by a device called luxometer, but police does not have enough of these devices to enforce the rule, says the order. It also cited a 1998 SC order that disapproves the use of film.

“It is the VLT of the safety glass without any additional material being pasted upon the safety glasses which must conform with manufacture specifications,” says the court in its order. It also ordered that a committee consisting of Home Secretary and police can give exemption from the order on a case-by-case basis for those availing Z or Z+ category security.

Not many are happy about the order

There are those who have decided to not remove film. “Women are attacked in public all the time; what difference will the rule make? I will wait and see what happens,” says a woman car owner, on condition of anonymity.

On BTP’s Facebook page, many have posted comments saying that the rule will not bring down crime, but will only reduce privacy, reduce cooling inside car, and will be dangerous for women drivers. Branded films cost Rs 2000 – 6000 per car on average.

“The original MV rule was valid as many crimes do happen in cars. But with complete removal of film, more AC usage will be needed to cool the car. Also, women driving at night will be visible and may be harassed. Only very high-end cars come with tinted glass from manufacturer; others have no option,” says Sooraj.

Traffic police has responded in Facebook that privacy cannot be expected in public places, and that cooling inside the car will not be affected. It says that crime against women will be lesser when they are in full public view.

Some public comments are also about lack of luxometers, which court cites as a reason for the ban. Luxometers are not very expensive, they say. ACP Saleem says that the device costs about Rs 1200 in market.

On protests from public, Saleem says, “We are spreading information through campaigns. But it is not up to us to deal with protests as this is SC’s order.”

There are also petitions floating online, asking SC to reconsider the ban. One such petition in www.change.org has got over 2100 signatures so far of its target 75,000. ⊕

As the controversy regarding Venkatappa Art Gallery slowly fades away, artists are hoping to help the government in making the Gallery an active tourist spot.

Palace grounds: No bands only baraat

A space for all the rock concerts, consumer shows and political rallies now stands silent. While event organisers have found newer venues, the question – what will become of Palace grounds, still remains unanswered.