Seeing the posters for Hugo, you’d expect something á la The Polar Express. Or The Curious Case of Benjamin Button. Something right out of your childhood fantasies. If you did, you’re right! Hugo is a magical 2-hour-8-minute long story of the hand-to-mouth life of a little boy, who stumbled on a life changing secret. Film-changing for cinema lovers.

Nobody likes to be forgotten. Especially if their work is so tremendous that they are de facto pages in world history. Today, popular names in movie trivia include ‘Deepika Padukone’ or ‘Karan Johar’. Moving to Hollywood, it’s ‘George Clooney’ or ‘Steven Spielberg’ or ‘Angelina Jolie’. But nobody remembers those who started it all- like George Méliès.

Which is why Martin Scorcese’s Hugo is a gift to movie lovers: about a French illusionist and filmmaker who was among the first to use several special effects that are still popular today. George Méliès can rightly be considered the first ‘Cinemagician.’ While Hugo does tell the story of a 12-year-old orphan, Méliès is the omega of the film.

1931. In the walls of The Gare Montparnasse station of Paris lives orphan Hugo Cabret (Asa Butterfield) who repairs the station clocks. Thing is, Hugo’s uncle is supposed to be in charge – but no one knows he’s vanished! The Stationmaster (Sacha Baron Cohen) assumes Hugo is his Uncle.

Hugo is good at theft: not just flicking food, but also mechanical parts from a toy store in the station. His goal? To fix an automaton which can write with a pen, his late father’s most ambitious project. He believes it has a message from his father. On one such expedition, Hugo is caught and his precious notebook- with instructions on how to fix the automaton- is seized.

Papa Georges (Ben Kingsley), the angry store master threatens to burn the book. Hugo enlists Georges’s god-daughter Isabelle’s (Chloë Grace Moretz) help to retrieve the book- and the two embark on the adventure of a lifetime! What is the message in the automaton Hugo is so desperate to find? What is Papa George’s secret? 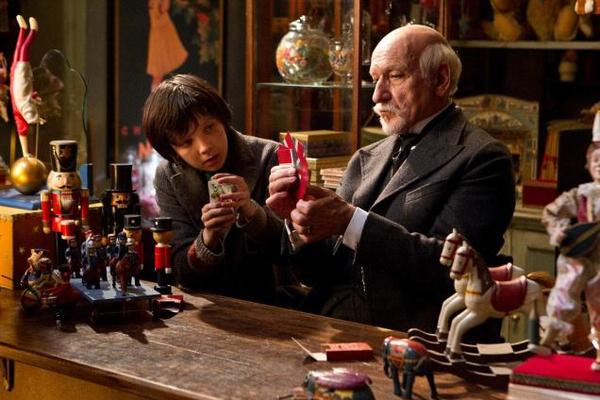 A still from Hugo

The story which follows is a fairy-tale, exquisitely crafted and presented. Hats off to John Logan for the screenplay. Two-children-going-on-an-adventure stories will never get old: there’s something about their innocence and determination. The main plot never loses its grip- but the sub-plots do. The ‘romance’ factor in the movie – if supposed to be lighthearted was not amusing! The end (which shall remain unspoiled) is quite unexpected.

It’s the cinematography which steals the show here.  Robert Richardson deserved his Oscar: the sweeping panoramas of Paris will not be forgotten anytime soon.  Anyone unacquainted with the City of Light’s signature cafes – well this movie’s for you. As for the actors, Asa Butterfield’s grey eyes are hypnotic! Ben Kingsley captures the crab personality (Crabby outside, vulnerable inside) beautifully. The performances of  Chloë Grace Moretz and Sacha Baron Cohen are laudable too.

The final touch is Howard Shore’s (of the The Lord of the Rings Trilogy) score. Watching the mysterious station and the colourful Paris vista would have been dull without the lilt of the accordion in the background. The music is enigmatic, dreamy and fanciful and- c’est très Française!

The inspiration behind it all was forgotten and resurrected later. Méliès most famous film was A Voyage to the Moon, which includes the famous scene where the spaceship hits the moon in the eye. One of the most important film devices he discovered was the ‘stop trick’: while shooting a traffic scene, his camera jammed, he fixed it and continued shooting. Later, when he screened the printed footage, he saw a bus change into a hearse and women into men!

Méliè’s work began to decline around 1907. When World War One started in 1914, his studio in Montreuil was converted into a hospital for wounded soldiers, and many of his films were melted down to recover the silver and celluloid. He ended up working as a candy and toy salesman and was virtually forgotten. By the late 1920’s journalists rediscovered Méliès and he rose to international acclaim again, receiving the Légion d’honneur (Legion of Honour) award in 1931. Méliès died on 21st January 1938 of Cancer. Today, over 200 of his films survive.

New malls mean entertainment hubs in the neighbourhood. But it also adds hundreds of cars to the very street. A Citizen Matters inquiry exposes a huge hole in BBMP’s mall approval rules.

In what may well rank as India’s first ever rock concert for prison inmates, Raghu Dixit Project rocked Bangalore Central Jail on November 11th with their upbeat songs.

Should Ramadoss ban spitting too?

He may have gotten famous for banning smoking, but perhaps Anbumani Ramadoss must take on the spitters too.