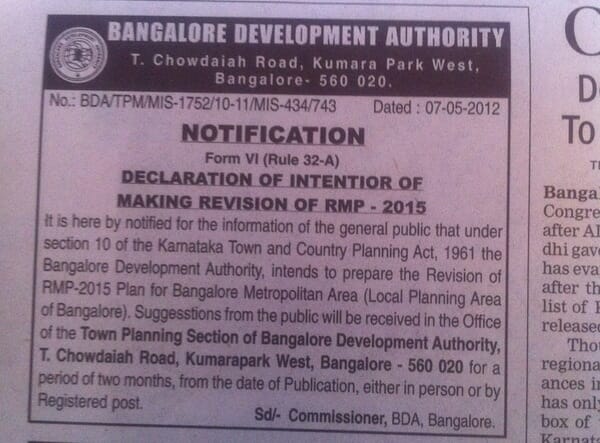 Bengaluru’s master plan is the most critical piece of regulation for the city’s land use, development, and growth management. It defines all rules pertaining to zoning. Residential and commercial development in various areas are permitted or barred in this plan, locality by locality. Permitted floor area ratios for various road widths in commerical and residential areas, mandatory additions such as parking, are all put down in the master plan.

In the notification published in newspapers, BDA says that public can give their suggestions within two months. Written submissions are to be given to the Town Planning section of BDA Head Office in Kumarapark West. Citizens can visit the office in person or send suggestions by registered post.

Last year, BDA had invited Expression of Interest (EoI) from consultants for preparing the new master plan. Nine Indian companies – two of which are based in Bangalore – have been shortlisted.

"All nine companies will be asked to submit RFP (Request For Proposal) soon. ISRO’s National Remote Sensing Centre (NSRC) will prepare the satellite images, which the selected consultant will use to make the plan," says a senior BDA town planning official. The official spoke to Citizen Matters on condition of anonymity.

BDA is going ahead with the Master Plan revision even as the current RMP-2015 has been dragged by citizens into a High Court case. In 2008, the civic group CAF (Citizens Action Forum) and others had jointly filed a PIL (Public Interest Litigation) questioning the plan’s approval process and some of its provisions.

Petitioners had said that while preparing the RMP, BDA had disregarded the opinions of public; public had filed around 7200 objections last time. It also said that BDA had ignored the recommendations of a review committee of experts and another core committee, both set up by government.

Three and a half years into the case, the High Court passed an order this January, quashing one aspect of the RMP. In the current RMP, BDA had permitted some commercialisation in residential areas. Court said that this cannot be permitted, and that residential areas should be kept as they were, as per the previous (1995-2005) master plan.

Reacting to the BDA initiation of a new master plan revision, Aditya Sondhi, advocate for petitioners in the PIL, does not question the move itself. But he says that "the implication of this revision, will depend on the kind of plan that BDA comes up with." He did not comment further, citing that the matter was sub judice.

Will the BDA bypass BMRDA this time also?

The citizens/PIL also said that the suggestions of BMRDA (Bangalore Metropolitan Regional Development Authority) were ignored during plan approval; and that BDA had not taken BMRDA’s permission itself before initiating plan development.

According to BMRDA Act and Karntaka Town and Country Planning (KTCP) Act, BMRDA is the ‘Director of Town Planning’ for all local planning bodies in Bangalore Metropolitan Region. Whenever a local planning authority like BDA makes a master plan, it has to get BMRDA’s approval; only then can it go to the state government for the final nod. This is how master plans become enshrined in local regulations, and are then used by town planners to accord or reject sanctions for projects.

A senior BMRDA official, speaking to Citizen Matters on condition he not be named, says that BDA’s plan has to broadly confirm with BMRDA’s policy document on planning. "This document was created in 2005 and is still in effect. Every time BDA sends the plan to the government, it has to be through BMRDA", he says. He adds that BMRDA does not initiate the master plan for Bengaluru, and is not consulted about this. "BMRDA can make the plan by itself only if BDA does not initiate it", he says.

The BMRDA official admits that last time BDA had not sent the draft master plan to BMRDA, but had directly sent it to the government. "BDA sent the plan to BMRDA only in the final approval stage. This might have limited BMRDA’s power to suggest changes. BMRDA cannot make changes in master plan directly, but can forward it to government with its suggestions. In case of major changes, it can send it back to BDA", he says.

It remains to be seen whether BDA will follow the full process this time, both with responding to citizen submissions and the BMRDA’s master plan policy. ⊕

Age no bar for Jayanagar resident

Local news roundup from South Bangalore this week: meet this East End resident who is enthusiastic about craftwork; Shoe thieves are active, while police And there are plans to make Jayanagar a no-plastic zone.

We are mostly a generation of overprotecting parents. When would I finally have the courage to let him be on his own, without parental supervision in every step of the way?