Which one of us has not watched the house sparrows as they hop about, living their lives alongside us humans in our rural or urban homes? House sparrows (their scientific name is Passer domesticus, the very name saying that they are a part of our domestic lives!) are small and pretty birds which play a large role in our lives, though we are often not aware of this. 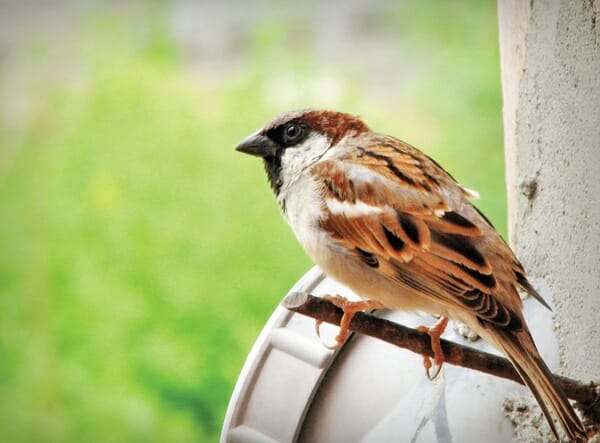 Can you imagine, these birds are supposed to have become associated with humans nearly 10,000 years ago! Stunning, isn’t it?

Sparrows prefer a hole to nest in, and the ventilators in our old house gave them ready-made places to nest in. Apart from this, the "cups" at the top of ceiling fan stalks, holes in the wall, and other such locations make great places for sparrow nests.

Citizen Sparrow, a public project seeks to document information on sparrows in India – just fill a quick survey if you have observed sparrows anywhere. Project closes on 31 May.
See http://citizensparrow.in

They love pecking at grains, and often eat insects and worms, too, and that is sometimes beneficial to us. However, they have often been regarded as pests, and have been systematically wiped out.

Since the population of house sparrows in Bangalore (as in many other cities around the world) dropped sharply, efforts are being made to bring them back, and in our city, at least, it is a heartening sight to see these perky birds hopping around in areas such as K R Market, Russell Market, or even the Bangalore International Market

So the next time you see the house sparrows…do observe them for a while if you can! They are intimately connected with our city life, and are interesting to watch!⊕

Paint the town, one wall at a time

The BBMP may be on its own drive to paint the city walls, But here are a group of youngsters, working on street art.

The Indian finals of Red Bull Paper Wings, a paper airplane flying contest took off at the old HAL airport in Bengaluru, with enthusiastic contestants flying their creations in a bid to reach the international finals at Austria.