The only large playground on 19th Main, BTM layout, 1st stage has become dumping yard, for construction debris, owing to the broken fence all around. This playground comes under BBMP ward 176 and is a major open lung space for the neighbourhood.

The residents feel that if the fencing is not done, the entire playground will soon become a dumping yard. Some contractors have started to illegally dump construction debris at night. Subramaniyam Sheshadari, a resident who stays opposite the playground says that at the least, the fence should be repaired to avoid the situation from getting worse. 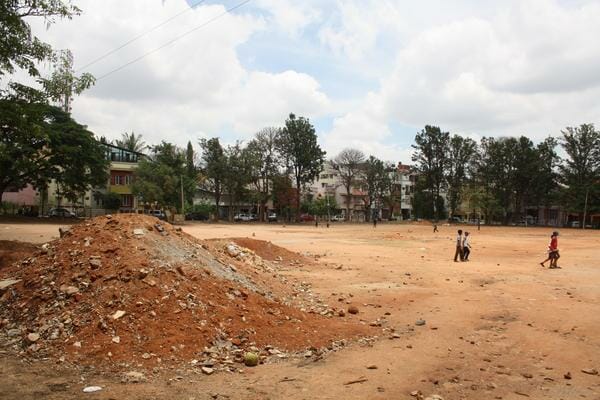 Debris in the playground due to illegal dumping

The residents feel that ward Corporator GNR Babu, has done his bit to keep the playground in good shape. Recently Babu took the initiative to install street lights around the playground and levelled one part of the ground to make a badminton court. Residents claim that the street lights have brought down the instances of chain snatching in the vicinity.

However when it comes to fencing, BBMP’s lack of funds seems to be an issue. Babu though now says that the project to overhaul the ground has been finally approved and will be completed in 3-4 months. Babu says, "Around 25-30 lakh rupees budget has been approved by BBMP. It includes re-fencing, building toilets as well as a provision for a security guard to safeguard the area." ⊕

As the curtain rises

Lakshmi Menon got to be part of the production crew for Evam’s ‘Idiot for dinner’ and thoroughly enjoyed herself.

What has Vijayanagar MLA been up to in the last five years?

M Krishnappa has been in news for landgrabs. He has supported the work the Ugly Indians wanted to do on metro pillars in Vijyanagar.