In what may come as small relief to disgruntled Bangaloreans, BDA says it has issued notice to the contractor building the Kadubessanahalli underpass on the Outer Ring Road (ORR). The completed section of the underpass (south going) flooded due to overnight rains on Tuesday May 1st, throwing Wednesday morning’s commute into a gridlock. 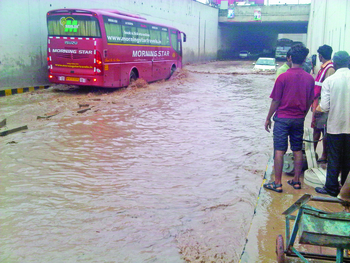 The flooded Kadubeesanahalli underpass on May 2nd morning. This picture, taken by an as yet unnamed photographer made the rounds yesterday both on Facebook as well on email.

"The entire ring road is a farce, engineering is pathetic", commented Satya Sankaran in frustration, a Facebook user. "Somebody should calculate the cost of man hours lost due to the 6km jam in the morning – people came in two hours late", commented Taran Hukku, another Facebook user.

Misra also said in his post that he had asked BDA to investigate.

After a May 1st holiday that saw very quiet roads, citizens were in for a shock on ORR near Marathahalli on May 2nd morning. The south going direction towards Kadubeesanahalli jammed severely causing a backup to Marathahalli and further up north past the Kalamandir point. The trouble was due to the completed underpass at Kadubeesanahalli was flooded due to the heavy downpour on May 1st night.

Disgruntled commuters in buses and private vehicles reached their offices between 1-3 hours late, by most estimates.

Cisco Systems, a global tech major with a large campus off ORR very close to the Kadubeesanahalli intersection issued an advisory at 7.14 am. "Employees coming from Sarjapur road side to Campus are recommended to come via Wipro corporate office, Doddakannelli village and enter the campus through rear gate", wrote Poornapragna A, Head of Security in his emailed note.

The Outer Ring Road Companies Association was also active in advising commuters to use the HAL Airport Road and Inner Ring Road to reach Koramangala instead of the ORR.

The ORR had gone into gridlock by 8am.

Speaking to Citizen Matters, BDA Assistant Executive Engineer B Nagendra said that the fault was the contractor’s. "The problem was due to the stormwater drainage that was not connected to any point. The process is on to connect this with a pipe into the lowest point – Doddanekundi", says Nagendra.

According to BDA’s agreement with the contractor, a kilometre-long pipe should have been there. Nagendra further added BDA has sent notice and assured that the problem will be solved.

The Kadubeesanahalli intersection has already become a massive mess in the northbound direction in the evenings. This is because of the manner in which traffic coming from Iblur/Agara towards Marathahalli is entering using a narrow slip road and a specially carved up underpass lane.

The debacle of May 2nd turned out to be a warning for everyone who travel by this stretch of the ORR, as this was merely the first rain of the season. ⊕

Register your borewell now, if you haven’t already!

You can also complain to the government if you are being approached by middlemen who demand excess money to get your borewell registered.

Why Koramangala looks like a war zone: Five ongoing projects in 4 sq km

With five major infrastructure projects, and several smaller ones, Koramangala resembles a massive construction site these days. Neither the hapless residents nor the authorities are clear about the details of these projects, or why they are needed at all