On days such as these, when it rained through the night, our cab driver takes a alternative route. A route which traverses through the many hamlets of Bellandur and Doddanekundi villages.

This route does not ensure a faster and quicker access to Marathahalli but atleast we get to escape the traffic jam at ORR signals. It really seems like a never ending journey sometimes. So while he drives through lanes and by-lanes for a good 30 minutes, we get to see the real Bangalore that resides behind the glitz and glamor of the shiny software parks. 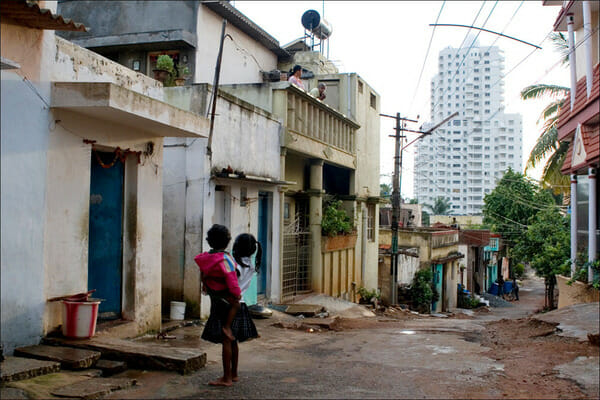 Narrow lanes, with houses built on barely 600 sq ft , urchins on the road. Surprisingly every inch of space behind the IT glam sham has been used up by land sharks. You can see many an apartment complexes, some prominent ones too that promise a ‘Spanish living’ and the likes.

Today to my left, I saw piles and piles of sand that has been excavated and to the right, a new slum. Atleast fifty makeshift houses with blue tarpaulin sheets. This city is forever in need of low cost labour that builds the IT capital. I wonder who the takers are. I seriously wonder.

Who are the takers for a property hidden behind the ORR with barely any road. The only access to these are muddy roads. A little further is a lake that is frothing.

A few months back, our cab had to stop to allow a snake to pass through. All this must have been fields or lake beds. Sadly now, these have been encroached upon by builders to construct new malls and housing complexes. An office colleague stays close by. He says he pays a rent of more than Rs 6000 for a one BHK. The building houses eleven such homes.

Ask me who has benefited the most from the IT boom, it must be the villagers who spotted the opportunity or landlords that possessed a 60*40 site. Now a 60*40 site provides home for atleast 5 families. Water, I assume will be supplied using water tankers.

The back road exposes the ugly Bangalore. The Bangalore that houses lower middle class homes, with toddlers being bathed in the cold, with food being cooked in the open.Yet the lower and educated middle class co-exist.

I woke up from my thought slumber to realize that we under a railway bridge. We zoom past a high raised barbed wire protected compound. I began to wonder if we reached old airport. And then I spot my office building. We are back on ORR for the rest of the journey

While the cab driver gets his car checked by the security I wonder how much more this city would grow. May be it will as long as our US/UK counterparts want to cut down costs.As long as they need work to be outsourced, there will be more digging, more layouts.

Folklore says that the Nandi in the Bull temple had a nail forced into its head, else it was growing uncontrollably. I wonder what that nail is for this city that is forever growing!

About Vani Balaraman 4 Articles
The author has not yet added any personal or biographical info to her or his author profile.

Around six months back, the NGMA (National Gallery of Modern Art) started charging a fee for entry to its premises. The gallery, under the centre’s Ministry of Culture, is supposed to be a public space. Instead, it is being turned into an exclusive space for the select few

“COVID response: Bengaluru is overlooking every management lesson from history”

History shows that Bengaluru has reined in pandemics before. But now, with turf wars and bureaucrat transfers, even basic principles of management are missing from the city’s COVID response.

A wildlife artist has to depict her subject true to life. That is what differentiates us from artists, says Sangeetha Kadur who has held her first solo exhibition of wildlife art.