A lot has already been written about the virtues of barefoot running and with each passing day, more are being added. The sales of minimalist running shoes world over, had increased by more than 283% in the first half of 2011, the New York Times has reported. In the month of December 2011 alone, sales grew by 658%, a report by Leisure Trends Group, a speciality retail market intelligence provider.

I see more and more people taking to barefoot running or with minimalist footwear with each passing race these days. In absolute numbers though, they are yet negligible compared to the number of people who run with shoes on.

Having taken to long distance running since mid 2008, I have always been running with my shoes on. But I have always been curious about barefoot running (or with minimalist shoes) and have been reading a lot about it with keen interest. I have attempted barefoot running a few times, albeit only for short distances. As a sprinter during my school days, I had run with racing flats and spikes (both are minimalist shoes). 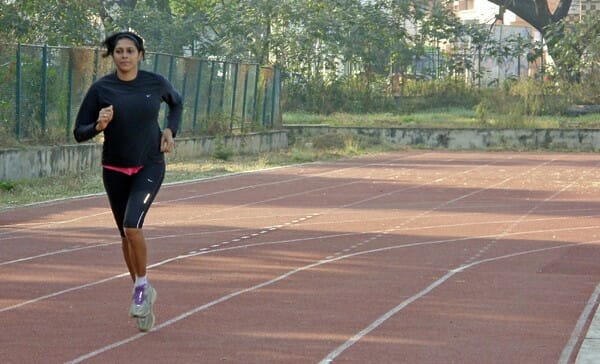 Bengaluru has become a hotspot for running. Leading former champions such as Reeth Abraham (retired 1992) reside in the city. Reeth is still active in running and takes part in masters events. Pic: Deepthi M S

Why are more and more people taking to barefoot (or minimalist) running these days? If barefoot running was so much better, why didn’t we see barefoot running in any of the world class events, in all these years?

1970s saw Nike, Adidas and others spawning a whole new industry and all the elite runners took to running with one of these shoes. Surely it was not because of just marketing gimmicks nor was it just because Nike, Adidas,et al were heavily sponsoring those athletes. Nike & Adidas did a lot of research with top athletes for the right kind of shoes to help them win. Why did all the barefoot (or with minimalist shoes) runners embrace the cushioned shoes then?

If barefoot running is so beneficial, why aren’t the elite runners switching over to barefoot/minimalist shoes now?

As human beings, we walk with heel strike. It goes from heel strike to forefoot strike as we increase the cadence by jogging, running and finally sprinting. All sprinters have forefoot strike. Incidentally, the shoes that sprinters wear are all minimalist shoes with spikes in it to aid better grip and faster running.

All athletes who run 100m, 200m, 400m and 800m, can be observed to have a distinct forefoot strike running form. The only difference being that athletes who run 800m wear spikes that offer sufficient cushion for the heel and mid foot.

From 1500m on, athletes have a distinct midfoot strike or heel strike with immediate roll over. This is because one cannot run longer distances with forefoot strike. Their shoes/spikes have sole cushioning to lessen the impact and protect the heel from injury.

Anyone starting to run barefoot will naturally end up having a forefoot strike. This means the strides will be shorter and hence increased cadence. The foot is in contact with the ground for lesser duration. Since the strides are short, the foot strikes close to the body’s center of gravity. The entire body weight is not shifted to the landing foot, hence there is less stress on the knees.

Why do we need shoes to run? As the distance increases and the foot starts pounding constantly, it is a strain on the heel, ankle and knees. The cushioning reduces the impact.

So why do runners using shoes get injured?

The heel cushion is also driving runners to develop incorrect running forms, which leads to running injuries. An example that illustrates this point is the way one runs downhill with shoes and without shoes. A runner with shoes on will invariably land on the heel, while a barefoot runner will land on the forefoot or mid foot while running downhill.

The correct running form is that the foot should hit the ground in line with the knees. The landing should be on mid foot or on heel with immediate rollover. The foot strike is either in line with the torso or slightly in front of the torso. The foot strike is also slightly in front of the body’s center of gravity. This means taking shorter steps and increased cadence.

If the foot is pointing up at the time of landing, it is obvious that the runner is landing on the heel. This is likely if the runner’s foot is striking the ground well in front of the knee. This also means that the foot is in contact with the ground for a longer time. The body weight tends to shift on to the landing foot leading to a lot of stress on the knees, ankles and heels with constant pounding. This would surely lead to injuries. This can be easily corrected by taking shorter steps. For some runners, one foot might be landing correctly, while the other foot may land in front of the knee.

I also have been observing some of our very own seasoned and fast marathoners during the runs organized by “Runners for Life” and in the races that I have been participating. All the good runners have a similar running form as described above. Even the runners who take long steps, land their foot in line with their knee and rollover quickly without transferring the body weight on the landing foot. I have also seen some runners who are on the heavier side, having mid foot landing.

First of all, it is good to do a Gait Analysis to understand one’s running form. Gait Analysis is the video based analysis of one’s body mechanics while running. Irrespective of whether one wants to run barefoot or with shoes on, the running form remains the key to avoid injuries.

So which is better?

To assume that barefoot running will be injury free is being very naïve. For the moment though, enjoy the barefoot runs, if that’s what works for you.

If barefoot running is natural for human beings, running on hard surfaces such as roads and pavements is definitely not natural and is fraught with danger. Wearing a shoe gives the cushion to minimise the impact.

It is also a fact that wearing sufficiently cushioned shoes improves the marathon running performance (read speed). This is certainly true for all the elite athletes. That is the reason all elite marathoners have been running with shoes on, for so many years now. It is for the same reason that Abebe Bikila ran with shoes on, in 1964 Olympics. As a matter of fact, Abebe Bikila suffered a heel injury while training barefoot and could not qualify for 1968 Olympics.

Barefoot running/ minimalist shoes are being used more and more by the recreational runners and not by competitive runners, as on date. Competitive runners may still use racing flats for sprints, interval runs while training.

Barefoot or shod, ultimately what is important for all runners is to stay injury free and enjoy the runs. To quote the Zen aphorism “Pain is inevitable. Suffering is optional.”

About Sridharan K 2 Articles
The author has not yet added any personal or biographical info to her or his author profile.

Girls from Carmel Convent school in Jayanagar make up most of Karnataka Volleyball team and won the nationals in first week of December. Sports help us concentrate on academics better. say the students

Karnataka Horticulture Department, on expert advice, wants to ban pigeons and dogs from Cubbon Park. Leo Saldanha says this is not based on scientific facts at all!