This is Cult Entertainment’s seventh production, after plays such as God by Woody Allen, and Black and White, adapted from the works of Rowan Atkinson. Their latest play, the Imaginary Invalid, had a successful showing earlier this month at Brigade MLR Center, JP Nagar, on the April 12th, and was performed at Kyra Theatre and Restaurant, Indiranagar on the April 15th.

The protagonist of the play is Anthony Rathnam (Praveen Kumar), a Tamil Christian hypochondriac, who believes himself to be ill but doesn’t quite know what he suffers from. He is forever convinced of the incurability of his condition and places absolute faith in his doctors. 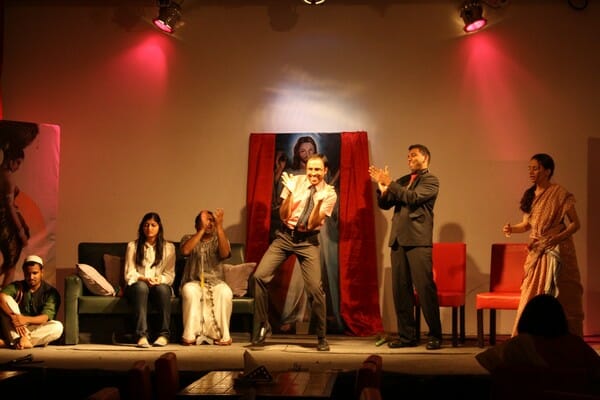 Always there to advise him (sometimes against his own will) is Arundathy (Kshema), the sensible Kannada speaking maid who has sympathies for Anthony’s daughter, Angela (Maitri Ramkumar). Anthony wishes to get Angela married off to socially-impaired and classic moron Sunil Demble (Abhijit Bharadwaj) the son of Dr Demble (Syed Inamullah) to have free medical attention at all times, but Angela disagrees – she is set on marrying shy the Ahmed (Goutham Iyer) with whom she says she is in love.

Cult Entertainment was started three years ago by a few Bangalore-based professionals trained in various aspects of theatre. It aims at bringing back the audience that theatre has lost to films. Their director, Avinash Daniel, adds "I started Cult to give talented youngsters a platform to perform."

Meanwhile, Anthony’s vampish new wife, Margaret (Thejaswini Gopalaswamy), wants to send Angela off to a nunnery, all the while pretending to be loving and doting- but she has set her eyes on something else – her husband’s ample riches? Arundathy brings in Uncle Chipee (Deepak Justin), a silk-shirt wearing, retro ‘guy’ who tries to reason with Anthony, but in the end, all it takes is a couple of honest phrases and a maid mourning her master’s untimely demise to see where his family members’ loyalties truly lie.

The Imaginary Invalid adapted itself to the South Indian situation with plenty of good old Bollywood charm and 80’s clichés. "This is the first play I’ve ever watched," said Shikha, 27 "And I definitely didn’t expect this!" Indeed, this take on the Molière classic incorporates none of the old French charm one anticipates – instead, "Kabhi Khushi Kabhi Gham" plays gently while the actors go through a few dramatic and tearful moments on stage, and the candidate for groom transforms into a disco dancer for a minute or two.

The start of the play was signaled by the hit Tamil song Nakka Mukka, which was certainly unexpected! It was described as a well-rounded entertainer by Sreekanth, 32, who also said "Didn’t know what to do on a Sunday, stumbled upon the Imaginary Invalid – turned out to be one of the best evenings!"

All in all, Imaginary Invalid is a play apt for those who are nostalgic for some yesteryear glamour, and is entertaining for all audiences regardless!

If you wish to watch the play, there are two more shows at the Alliance Française on 28th April, at 4pm and 7:30pm.⊕

About Gaana Srinivas 4 Articles
The author has not yet added any personal or biographical info to her or his author profile.

This egg shaped island is named after Sri Ranganatha. The city
served as the base for powerful empires of Gangas, Vijayanagara viceroys, Mysore kings and as the capital city of Hyder and Tipu Sultan.

UID enrollments kicked off in Bengaluru in the last week of June. Where can you get enrolled?