Elita Promenade residents in JP Nagar, 7th Phase, have filed a lawsuit against their developers for allegedly keeping them in dark over various issues related to the apartment complex. The case was filed in November 2011.

Three issues seems to lie at the centre of the conflict – sewage problem, lack of clarity on land ownership in the layout and sale of one part of common land to KPTCL without notice. 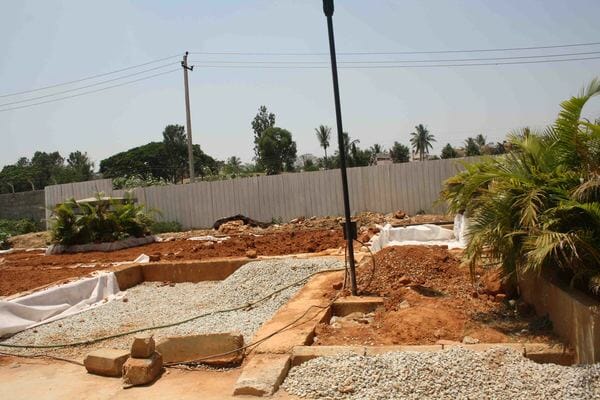 Pic: Abhishek Angad A temporary boundary fence with sheets, at one corner of Elita Promenade

Sewage Treatment Plants are mandatory for larger apartment complexes. But the residents of Elita Promenade say the STP inside their premises does not treat water properly. However they are not able to take any action because they are not allowed to access STP data.

"From the very beginning construction quality of STP was bad. Upon enquiry we have been denied logbooks carrying information. We got it (water) checked and E-coli was found in one of the samples", says N R Sudheer, a resident and a retired engineer.

Sudheer worries that untreated water might be let into to nearby Sarakki lake. In addition to this there is also an older problem: sewage pipelines of residences outside Elita have been laid through the complex. This pipe, the residents suspect carries untreated sewage that is finally let into the lake. Citizen Matters had reported about this on 7th July 2011.

At one corner of the Elita campus, the boundary is built with temporary sheets instead of regular brick walls. Residents say that the land is disputed with the forest department and the boundary remains temporary until final settlement. However, the residents were not aware of the issue when they bought the apartments.

Another resident Sudheendra Srinivasamurthy and a software engineer says, "All the agreement said that Keppel has got undisputed land. After we found out about the dispute, we complained, but Keppel denies being at fault."

According to the residents, Keppel conducted a survey to prove that they are not at fault in terms of encroachment. But at the same time Keppel has not built a permanent wall.

Residents are also worried that the STP is near the disputed land, and, if any civic body takes control over that portion of land they have to bear the cost of STP to be set up elsewhere.

At the time of construction, Keppel sold one part of the land to Karnataka Power Transmission Corporation Limited (KPTCL) for a dedicated sub-station. This was to ensure continuous electricity supply at Elita. But Keppel failed to inform the apartment buyers about this.

Residents now want that sale deed to be converted into a lease deed. Another resident Bharath Kedlaya, a chartered accountant by profession says that though Keppel goofed up initially, residents are ready to reach a consensus. He says, "We asked them to convert the sale into a lease so that we remain the owner of the part of the land. Builders agreed, but in the last 1.5 years there seems to be no action."

This segregation by colour will save us

‘Segregate’ is all over the media now, on radio, newspapers, magazine, TV, blogs, and the social media. It is also in all of the city government’s (BBMP) recent communications on getting the city out of the mess.

The event organised by Namma Bengaluru Foundation saw the presence of only half the MLAs in the city, out of 28. The scheduled interaction did not take place as the programme started late.

How a developer conned buyers with pre-launch booking

A saga of how buyers fell into a pre-launch booking trap and ended up paying far more than the offer price. Part I of the story.