It was one question by a 65-year-old village woman that got Harish Hande to do what he does now. She asked him if he would be able to provide her light before she died?. He lights the bulbs of rural Karnataka and Gujarat. He has achieved great heights in his career in the field of solar energy.

He won the Magsaysay award in 2011 for putting sustainable solar energy to appropriate use. He won the Ashden Award for Sustainable Energy and Tech Museum Award in 2005. He also received the world’s leading green energy award from Prince Charles in 2005.

This JP Nagar resident, is now the Managing Director of SELCO India, through which he has succeeded in installing solar lighting systems in more than 1,20,000 households in the rural areas of Karnataka and Gujarat. 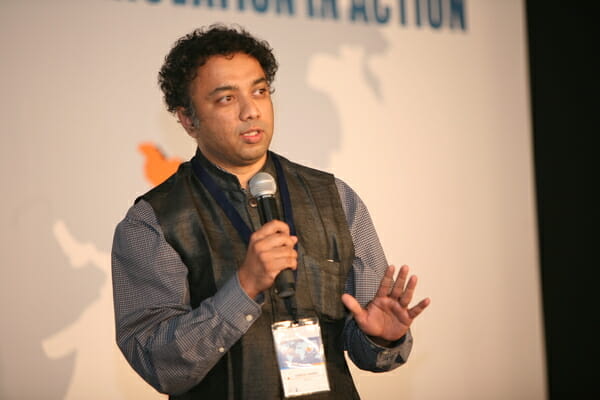 What would you like to tell Bengaluru about rural Karnataka?

I believe that urban Bangalore must know what rural Bangalore is like. It should not be like people volunteer on a weekend and say that they have seen the rural India. I think that for the larger cause of the society and social sustainability of the country, urban folks need to connect with the rural India. When we were children, our grandparents lived in villages and so there always was a connection for us during the vacations. It’s a shame that many foreigners know more about rural Karnataka than Bangalore youths.

How have you seen JP Nagar and the city progressing in the recent years?

I like the transportation system in the city though people still shout about it. KSRTC has tried its best to improve the transport system. The innovations of bringing out the red, blue, etc. It has introduced buses like Rajahamsa, Airavat and KSRTC to the rural areas.

When there is such an influx to urban Bangalore by the rich, middle-class and the poor, you cannot cope with that development however hard you try.

I am a critique of the government. But the question is, what have individuals done? If you take any residential colony, just look at the garbage. We blame the BBMP officials for not collecting the garbage. But are the people themselves not throwing it anywhere? I am appalled by the educated class people of Bangalore with the way they throw their garbage. Even at traffic signals, I’ve seen people roll down their car window glasses and throw the ice cream wrappers on roads. The bad part is, I have not seen the so-called educated class giving back to the society. I don’t see people owning the city. The sense of ownership is missing.

Don’t you think that lack of ownership is due to migration in Bangalore?

Is Bangalore taking the initiative for the development of the poor?

If you look at the hub in the country, in terms of social entrepreneurship, in terms of not only the poor but also whatever is missing in terms of development like efficiency of water utilisation and thinking of garbage collection, education, thought process, the city is becoming the hub of that.

My friends from outside Bangalore would say, "Boss, you have good bunch of people to talk to for civic issues." There is quite a bit of a younger crowd in Bangalore, though in small number but they have much more sense than in any other part of the country in terms of actual sustainable development. So I think social entrepreneurship is strong enough in this city.

What would you like to tell to the people of the city?

People today proudly say that their children go in only English medium school where there is no Kannada. We need to preserve our culture. Moreover, isn’t it a pride to see your child learn more languages? Where else will your kid ever get a chance to learn Kannada? What’s wrong in learning a local language? It is adding up your knowledge. If I live here, I should be responsible in preserving the Kannada heritage, if I live elsewhere, I should be responsible to preserve the heritage of that state.

What is your favourite hobby?

Apart from working in SELCO, I travel most of the time in rural Karnataka and read books on energy services.

What is your favourite hangout spot in Bangalore?

I like hanging out with my colleagues at the Rangashankara Café most often.⊕

Hike in BMTC fare hasn’t made the commute any easier or comfortable. The buses are run to pay salaries of BMTC staff.

Malliah, a farmer in the Kodigehalli taluk is happy to lead a life that revolves around his land, his animals and his village fairs, even as his land faces threat as the city expands.