It is Saturday afternoon and the community welfare centre at Dr Ambedkar Nagar, Koramangala 5th block is abuzz with a bunch of excited 8 to 15 year olds. Today is the day the children of this slum get to learn computers and maths from volunteers of Bhoomi, an NGO.

Andrew’s enthusiasm and eagerness makes him the favourite among the children and the volunteers.

Volunteers from Bhoomi centre, an NGO, come together on weekends to teach subjects like Maths and Computers to children in slum areas and orphanage homes. These classes in areas like Koramangala, Jayanagar, JP Nagar and Adugodi every Saturday and Sunday. The children are taught these subjects for free. People donate their old computers to such centres for children to learn. The classes are carried out in community welfare centers of these areas. 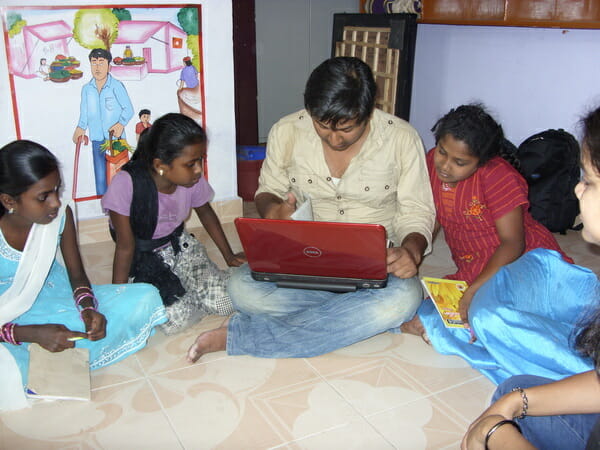 Jensi Brinda, a 11-year-old is a class six student. Her father abandoned her family when she was very young. She has two older brothers and her mother is a domestic worker. She is confident that learning computers is the ticket to good job. She says, "I like computers and want to learn it because it will get me a good job." She is in class VIII. Her dream is to become an engineer.

Delphina Mary, another child from the slum wants to become a nun or a teacher. She wants to teach people all the good things she knows. Studying in class IV in Missionary school, she knows how to operate the computer well.

24-year-old, Engineer, Aarthi Shubha, who volunteers here, believes that weekends are fun filled evenings with these children. The moment her bike enters Ambedkar Nagar, children start running after her shouting Akka… akka… She teaches computers here but says they want to learn a lot more than just computers. "The ideas that they come up with are really unusual. In fact, there is a lot that we are learning from them." she adds.

She shares that these children are very enthusiastic and take initiatives on their own once they know about certain things. They just need an opportunity.

Another volunteer, Prosenjit Das, Engineer, 28, says, "I believe in making learning a fun process so that the children can remember it for a long time."

The children have learnt to make some animation clips on Adobe Flash and everyone is really proud of it. They flaunt it like their trophies to anybody who comes to visit them. ⊕

Whether you use city buses are not, if you are worried about the hassle of transport in the city, this is the interview to read. Revolution knocking at BMTC’s doors.

Home for meaningful cinema, Suchitra has a very special place for cinema lovers. They now conduct classes in music an dance too.

All you can eat!

An epicurean stroll down Food Street in V V Puram.