Early Sunday morning on April 8th, when most of the ‘namma bangaloreans’ were looking forward to savour their morning cuppa or catch up with their weekend sleep, a group of young IT professionals hit the city roads to cycle 25 km. All for a cause. 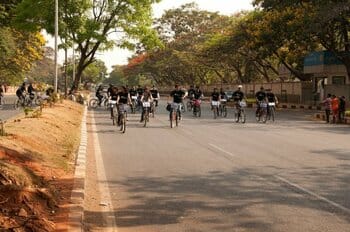 This group of enthusiasts joined hands in an exercise named Project Utthaan – All India Music Album launch, a CARTMAN initiative which aims to fund the education of underprivileged children. CARTMAN, an NGO was founded in 1989, by the visionary Padma Bhushan Professor N S Ramaswamy, founding director of IIM Bangalore and ex-director of NITIE Mumbai.

Hundreds of volunteers hit the road at 6:15 am, for the cycle rally organised by Utthaan team in collaboration with Go-Green group. The start point was CARTMAN society, Koramangala. The group cycled along the Ejipura, Domlur, Trinity Circle, Brigade Road, Austin Town and back, to spread the awareness and support for “Music-Album-Launch” by Project Utthaan.

Project Utthaan will be launching the music album in collaboration with SA RE GA MA on May 26th, at Mount Carmel auditorium, Bangalore. 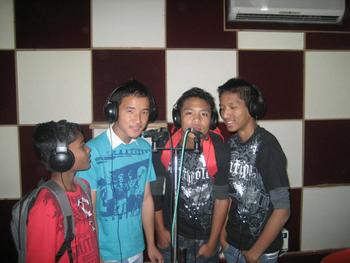 Agnel Roman (Music Director of the movie Ragini MMS) has scored the foot tapping music, written lyrics for the songs and trained the talented children from Kadesh Children’s home. This project intends to raise funds, in phases, and thereby help enhance these children’s quality of life.

The bicyclers dressed in Project Utthaan T-shirts generated curiosity among the onlookers, as the rally passed from Koramangala to Brigade Road.

The cycle rally volunteers campaigned for the music album, which is a compilation of the songs sung by the children of Kadesh Children’s Home. There are six peppy tracks, in the album.

Volunteers with the children. Pic courtesy: volunteers of Utthaan project

The volunteers also conducted drawing competition and games for the NGO children to keep the spirit of the event high. A Promotional Video was shot by Gajendra and Vasant, freelancers filmmakers. They had earlier worked on Splits Villa 1, Roadies 1 and MTV’s Pepsi Change My Game projects.

The event ended with refreshments and photo sessions with the cheerful volunteers and budding artists.

Well, Bengaluru sure might be known for its famed pub culture, what is heartening is the relentless support demonstrated by the same young guns for a social cause. Welcome to Bengaluru!⊕

About Gayatri Kadarla 1 Article
The author has not yet added any personal or biographical info to her or his author profile.

All set to vote in the BBMP Elections 2015? Here’s a quick guide for you

The battle for Bengaluru is heating up, as the city goes to polls tomorrow. Here’s quick guide to how you can find your polling booth to cast your vote in the BBMP Elections 2015.

Over 160 school children took part in a drawing competition organised by the Manjari Ladies Association on the occasion of Children’s Day.

Memories of a riot, a bedding house, paper mart and more

Vaidya R shares his memories of growing up in the Chamrajpet area in the 80s and 90s.