RWAs run by elected volunteers are subject to full fledged auditing to the last paisa. They are answerable to the house owners for every single expenditure incurred for the year. But BBMP that has budget outlays of hundreds of crores of rupees has done away with auditing for more than four decades now. Worse, BBMP has been reeling under fund crisis and scams. 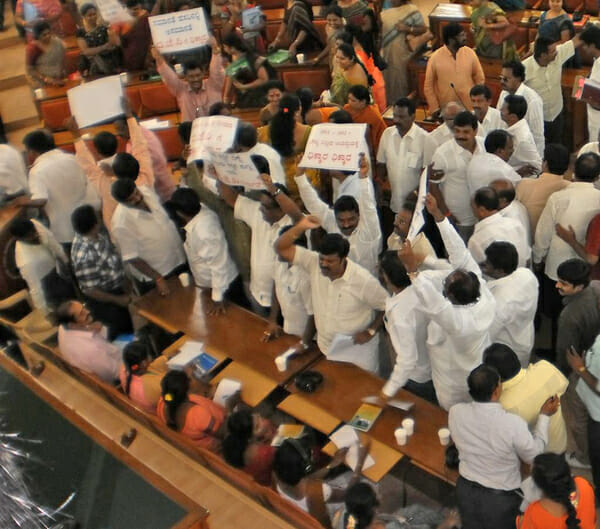 Since the major report of February 2012, Indicted by CAG, strangled by state, Bengaluru Limps on, Citizen Matters did an exclusive inquiry into who is responsible for auditing BBMP’s funds comprehensively. (Citizens may recall that that BBMP Accounts Committee Chairman A L Shivakumar had already exposed in 2011 that BBMP has not had internal audits since 1964.)

What Citizen Matters found out

No one within BBMP is sure who is supposed to conduct the auditing and bring the system back on track. Since CAG’s indictments of 2011, the top watchdog has itself said it cannot audit the whole accounts of BBMP, and can only audit specific schemes or departments of BBMP, like it does for other municipalities in the country.

Even more surprising is this: A top secretary at the state government’s urban development department, which is the primary donor to BBMP, and the city commissioner both passed the buck to each other on the question of audits.

What does the law say about the audit?

As per KMC (Karnataka Municipal Corporation) Act, BBMP and all other local government bodies have to be audited annually by the state government’s accounts department. This department appoints a Chief Auditor specifically for BBMP. The reports are supposed to be placed before the state legislature.

But the Chief Auditor’s report has been lagging for years. Current Chief Auditor R Govindaraju says that only reports up to 2008-09 have been published. "The 2008-09 report is available for sale to general public. We are doing to the 2009-10 audit now and plan to take up 2010-11 audit in April."

Govindaraju admits that the long delay renders the reports useless. He took charge two months ago. "I am not sure of the reason for delay as I joined recently; reports are not very useful because of these delays. These are supposed to go to BBMP and state government, who have to take action where necessary," he says.

Govindaraju is unaware of discussions about previous reports in the BBMP Council. Council officials say there have been no discussions per se on budgets. Additional Council Secretary Mario Pires says that he has not seen audit discussions in Council in the last few years.

CAG audits only in bits and pieces

In 2010, state government directed the CAG (Comptroller and Auditor General of India) to take up audits of BBMP and other Urban Local Bodies (ULBs), with effect from 2008-09. State government’s Urban Development Department (UDD) passed a notification on this. This was based on a directive from the central finance ministry and 11th Finance Commission, that all local government bodies should be audited as they get huge grants from central government.

CAG published its first report of BBMP last year, for the years 2008-10. The report focused on BBMP’s property tax collection and some other works, exposing fraud that caused loss of hundreds of crores. Currently CAG is auditing the 2010-11 accounts. The reports go to the state government and are also published online.

CAG can now take up BBMP’s audits for every financial year, but the limitation is that these are not complete audits. CAG does TGS (Technical Guidance and Supervisory) audits, in which specific themes are selected for audit each year. For instance, one of the themes for 2010-11 audit is road and drain works.

"One or two themes are selected for each year. The 2010-11 audit report may be out in June," says Gopalkrishna H, Deputy Accountant General (Local Bodies Audits and Accounts), CAG.

CAG’s reports are not concurrent either – ie., the audit for one financial year is not done in the same year. "Audits for a year will be published in the year that follows," says Gopalkrishna.

UDD’s initial directive to CAG was to do full annual audits of BBMP, but this was amended as per CAG’s request. "BBMP is not a government department, but a local body; also its accounts are too vast. Hence we said that we can do TGS audits for BBMP, just as we do for other local bodies," says Gopalkrishna.

He adds that the state government audits are lagging because of shortage of staff. "They also do not follow up on the reports with authorities, making the reports ineffective. We have had meetings with Chief Auditor asking him to streamline auditing, and have also met BBMP and UDD officials. BBMP is not in good shape now and will take time to start doing well," he says.

To do its audit, CAG gets BBMP’s accounts data from BBMP. as well as state government’s Chief Auditor. The audit reports, which also have recommendations for BBMP, are supposed to go to UDD Secretary and BBMP.

Though CAG’s TGS audits are all that is available, nobody within BBMP seem to be aware of this. The UDD and the BBMP Commissioner point at each other for action to be taken. On Citizen Matters’ enquiry, UDD Secretary Arvind Srivastava and Additional Chief Secretary K M Shivakumar say that they do not deal with BBMP’s affairs and that only the BBMP Commissioner would have information on audits.

BBMP Commissioner M K Shankarlinge Gowda, on the other hand, says that UDD would have the information since it had passed notifications regarding the audit.

BBMP Chief Accounts Officer (CAO) Subbanna was unaware that CAG had the power to hold audits annually on its own accord; CAG can only do individual audits as and when the state government directs it to do so, Subbanna says.⊕

Plenty of SMSes zipped around the many vibrant social networks in Bengaluru on March 8th. But is Women’s Day a big farce? Shanti Subbaraman, the woman entrepreneur who has ‘been there, done it’ in startup city, speaks up.

How does BBMP compute Property Tax

BBMP’s efforts in fixing loopholes in the Property Tax Self Assessment system, adds to the woes of property owners….

Citizens engage in a dialogue over issues confronting society and discover new avenues of understanding and bonding.