Bangalore is known as the suicide capital of India- recording the highest number of suicides, according to the recent data. National Crime Records Bureau 2010 data states that 1778 committed suicide in Bangalore. In such a scenario, support networks and helplines like SAHAI play an important role. SAHAI is run by volunteer counselors responding to distressed callers and talking them out of suicidal thoughts.

K K Rajagopal is the person behind SAHAI. A confident and energetic man of 66, this former BHEL employee moved to Bangalore in 1972 and started an electronic business. In 2002, he took the initiative to start the organisation. He lives in Koramangala. 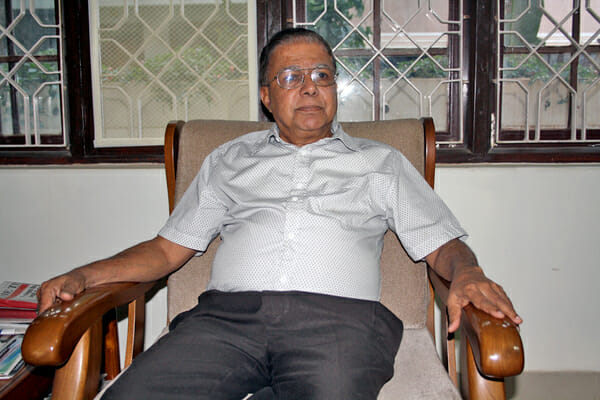 How was the idea of starting SAHAI helpline was conceived?

I was unable to cope with simple problems and used to get depressed in my childhood days. It used to be troublesome. Later, I lost my daughter in an accident. My wife and I were completely devastated. She was our only daughter and we couldn’t take the pain, so we underwent psychiatric treatment in Nimhans. After that, I always used to think of helping depressed people but did not know how. I joined Rotary club in 1997 and this was the place where I thought of starting something.

How did you operationalise it?

In 2002, I became the president of Rotary club, there every president had a reputation to start a unique project. So keeping this in mind, during my regular check up at NIMHANS, I spoke to erstwhile HOD and Prof of Psychiatry department, Mohan K Issac. He suggested I start a helpline to respond to depressed people. I immediately started it, manned by volunteers trained by professionals in psychiatry. We launched it on 2nd October 2002.

Why is there such high number of cases of depression these days?

Recently what I have observed is that people have started adjusting with each other, rather than accommodating. You take the example of working couple, they say ‘we are adjusting’. This tendency leads to depression. People have a big bungalow and cars but they spend sleepless nights. The reason is that their frustrations remain unheard, they can’t let their feelings out. People have become very busy these days to address these things.

How do you tend to handle your stress as of now and what do you at leisure?

Physically, I exercise in the evening and also practice yoga regularly to keep my mind stable. Most importantly I share my problems with my wife so I can feel that I am heard out. Reading keeps me engaged and I read lot of non -fiction books and listen to old Bollywood songs.

After SAHAI, any future plans?

I am interested to a launch a helpline locally, like in Koramangala, where people would be interested in social work. I want to start a suicide prevention helpline again with a fresh approach… by targeting small localities where we may get volunteers from there. As of now we do not counsel during night time but this is one of the most important time. Getting local volunteers will solve this problem and Koramangala would be one of the great places to start with. I have got contacts with doctors in NIMHANS to train the interested volunteers. Passionate people may contact me on 9845578224 or kkrajagopal_2006@yahoo.co.in.

Thanks to industrialist Walchand Hirachand’s initiatives in the 40s in Bangalore, India is one of the foremost in the maintenance and development of military aircrafts today.

The city’s new ‘sky-kissing’ clock tower cost the exchequer all of Rs 90 lakh, but whose needs does it really address?