Bangalore, a peaceful city that was once covered with a canopy of trees, and the IT capital of India, is no longer just that. Many say it is slowly turning into a hot bed of crime. The importance of self defence is gaining ground, and training centres in martial arts like jujutsu, taekwondo, kick boxing, etc., are in demand. 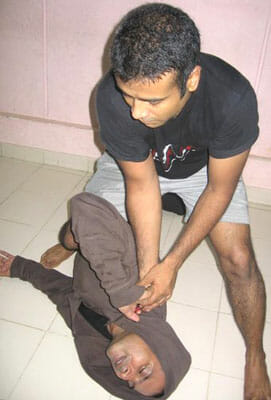 Martial arts is a serious business that works on all levels; on the physical level it helps the individual remain fit and healthy, on the mental and emotional level it infuses a great amount of self confidence, awareness and presence of mind. One such organisation that believes, understands and imparts martial arts training is Independent Shootfighters (IS).

The organisation deals with a martial art form called as shootfighting which is a combat sport, a synonym for mixed martial arts. IS is the brain child of Ashwin Mohan, and has its centres in various parts of Bangalore. Today, shootfighters from IS not only conduct regular classes in self-defence and shootfighting, they also spread awareness on the growing need of self defence. Classes cost Rs.1500 per month, and are typically held two or three times a week, running to an hour or 90 minutes per class. (See box.)

Ashwin Mohan, 30, has been practising martial arts for close to nearly two decades now. He started practicing martial arts at the age of 12 years. As a child, Mohan was bullied all the time. In a show of tough love, his father told him to solve his own problems. “So I joined karate classes, and even won a prize in a state championship,” he explains. With a sense of achievement and excitement, he confronted his bullies. “I tried one of my karate punches. They just grabbed me by the arm and threw me across the floor.”

This time Mohan decided to be more practical, with the help of a gurkha friend, he learnt more practical fighting techniques and stood up to his bullies. “My self confidence soared that day. As a boy your self esteem depends a lot on your physical strength, and that day I felt I could do anything”, says Mohan. And after years of learning and practising different forms of martial arts, including jujitsu, judo, taekwondo, and kickboxing, Mohan reflects: “Martial arts are elegant: they are movement; they are rhythm; they are joy.”

Self defence is no laughing matter, and Mohan understood the importance of it when he was in school and faced with bullies. Today, with the increasing number of crimes in the city, the city is absolutely unsafe, he feels. The number of cases of mugging after 12 in the night is increasing, and areas like Outer Ring Road, Banaswadi, Trinity Circle, and Brigade Road are all unsafe after a certain time. “I have experienced this myself” he says.

How does self defence help?

Self defence helps at various levels for different people. Says Mohan, “I train a number of organisations in self defence, but only a few that take it seriously – it is meant to make appraisal forms look good. Only a few companies allocate time for practice.”

Martial arts involve a lot more than just techniques and throws; they require focus and discipline of the body and mind. In this art form, there are no breaks; everything has to flow like a single line of smooth silk thread. Also, for self defence one needs to form a strong martial identity, which is developed and formed over training. It gives practitioners the confidence to defend themselves in any situation. “Mind is a powerful weapon in martial arts, and thus they train the mind too. In self defence, one should come out of the victim mentality and develop the intention to hurt,” says Mohan.

A number of stereotypes and myths surround the issue of self defence, the common being the need to be physically stronger than the opponent. According to Mohan, people generally focus on what they do not want rather than what they want. It is the constant negative emotional state of mind that makes one prone to attack. “The whole idea is to convert it into a state of self confidence”, he says.

From the vantage point of women

The biggest stereotype is the illusion that a woman cannot protect herself, as men are physically stronger. This is wrong, says Mohan, adding that all it takes is pure aggression, innate in every human being, and knowledge of basic anatomy.

Women have no experience with violence and are trained to be obedient and respectful in our society. So when they are faced with violence, like when they are suddenly attacked, they go into a state of shock. “Women think they are liberated but actually they are not, they believe that they need to be protected by someone physically stronger than them”, says Ashwin.

For long, women have not been allowed to be aggressive by nature, since it was not considered ‘feminine.’ This indoctrination has made them more vulnerable on the inside. A majority of women fall under social pressure, and exhibit a strong need to belong and to be accepted, which makes most women insecure.

Mohan says that rape for example is a form of sadism, where the person chooses the mind of the victim and not her clothes, or looks. “Most people should worry about what they are thinking, and sort their feelings out,” says Ashwin. In line with that, there are a number of techniques that Shootfighters teach women, which help them protect themselves. Shootfighting teaches women to be aware of their surroundings, be open minded and clear and be ready for self-defence in any situation.

For men the game is different, as they already have a sense of martial identity, and believe that they are strong and tough. This again arises from the stereotype that a man is physically stronger than a woman. A man can be aggressive and strong and throw his weight around. According to Mohan, “Men give more than what they can do and women give lesser.” In olden days both the men and women would go out on hunts and their basis for survival was physical ability. Today that is replaced by money, he feels.

When faced with violence, men try the ‘Bruce Lee’ approach, but after the first strike in the fight, go into a state of shock. “They do not know how to react, their confidence levels ebbs away; they are not completely sure,” says Mohan. Shootfighters thus believe in a more realistic form of fighting, and concentrates on building confidence levels, developing an ability to say ‘no’ and creating a sense of pride in every individual.

“We believe that the mind is an important weapon that needs to be trained”, says Mohan. Whether it is a man or a woman it is necessary that they have the right intention and thoughts. When faced in a violent situation, negative thoughts like, ‘I am going to be hit, I am going to be raped, I am going to be killed etc., circle the head; instead one should focus on ‘I want to get out of this situation; I want to hurt this person (in self defence)’.

Martial arts thus require complete practice and focus. One needs to train the mind and body to be always ready to strike in defence. Regular practice makes the techniques a reflex action. Mohan stresses that it is important to allocate time each day for practising the techniques. Imagination is the key, and one needs to visualise an opponent and the various points of vulnerability and hurt them with a strong intention of causing pain. “Skill is by Drill” chimes Ashwin Mohan. ⊕

Gamer and foodie stir up a brew

A pair of management graduates turn their love for food and games into building a business in Bangalore, as they dare to tread a different path.

City deals from over 17 categories ranging from health care and dance classes to dining and education are available for nearly 24 localities, now on Citizen Matters.