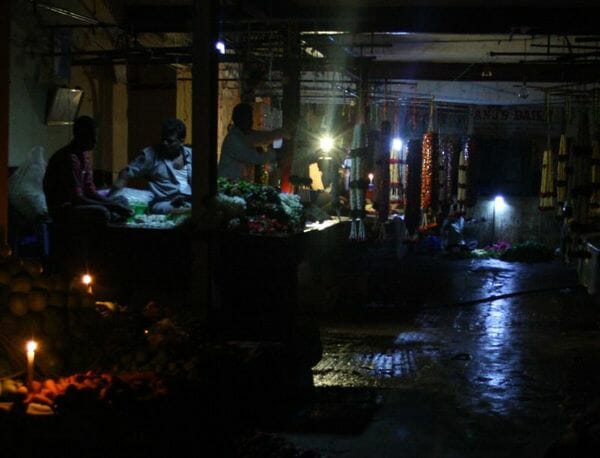 A traders’ initiative to rebuild Bengaluru’s gutted-Russell Market after the February 25th fire mishap has led to a standoff between them and BBMP. BBMP has sent an eviction notice to Russell Market traders citing dilapidated conditions.

Though the fire weakened the market structure initially, renovation seems to have restored strength. To rebuild the structure, traders employed a third party, KK Infrastructure, a firm which also worked with Bangalore Airport. All the affected traders contributed funds along with money received from the government.

Traders have initiated renovation ongoing at Rusell Market, even as a Civil Aid an independent organisation is doing a structural study of the market to assess its worthiness. Pic: Abhishek Angad.

Work has started on the ground floor and the full restructuring of gutted first floor will begin. The construction company claims to have extended the life of the structure by 100 years.

Ganesh Babu, a practising architect pursuing post-graduation at Bangalore University is writing a report about Russell Market on Heritage Conservation. He says KK Infrastructure has adopted safety measures in the rebuilding work.

KK Infrastructure has also asked Civil Aid, a Bengaluru based organisation that verifies structural quality of buildings. BBMP has also setup a committee to look into the issue of fire and the building’s stability, says K R Niranjan, Special Commissioner (Project, Resource & Finance)-BBMP. "Until then Russell Market will continue to work as it is. We are also awaiting Civil Aid’s report on the stability of Russell Market", says Niranjan.

The origin of the fire on February 25th, though reported as short circuit, is rumoured to be be a case of arson. The reason: an unconfirmed report that BBMP was anyways planning to evict the shopkeepers to make way for a multi-level parking complex. Traders fear that the fire was an arson caused by BBMP’s plans, to force them to vacate.

However, local corporator, Shakeel Ahmed (Congress, Bharathinagar), denied rumours of BBMP plans to evict the market for a parking complex. "Russell market was never meant to be rebuilt for parking. There are plans to construct a parking lot but it is on the opposite side of the market, for which a sum of Rs.40 crores has been approved by the central government."

He does however disagrees with BBMP officials’ plans to evict shopkeepers and says, "Russell Market attracts buyers from all over Bangalore and eviction is not a solution."

The situation is further complicated by BBMP’s unwillingness to cooperate with traders wanting to continue with their business, after the fire. BBMP has now locked up the public toilets in the market, which the traders find a problem.

Over 400 shops of fruit, vegetable, flower, toys amongst others are presently employing around 2000 shopkeepers. Atop the loss suffered by them , these people have been even devoid of electricity since March 29. Even the unburnt part is not provided with electricity.

BESCOM cut electricity just after the mishap, and traders managed with temporary connections for about a week.
BESCOM wants a letter from BBMP to restore power supply. A BESCOM official, under condition of anonymity, says, "BBMP has to send us a request for restoring the supply for the part of market unburnt." So far there is no proposal from BBMP to restore the supply. 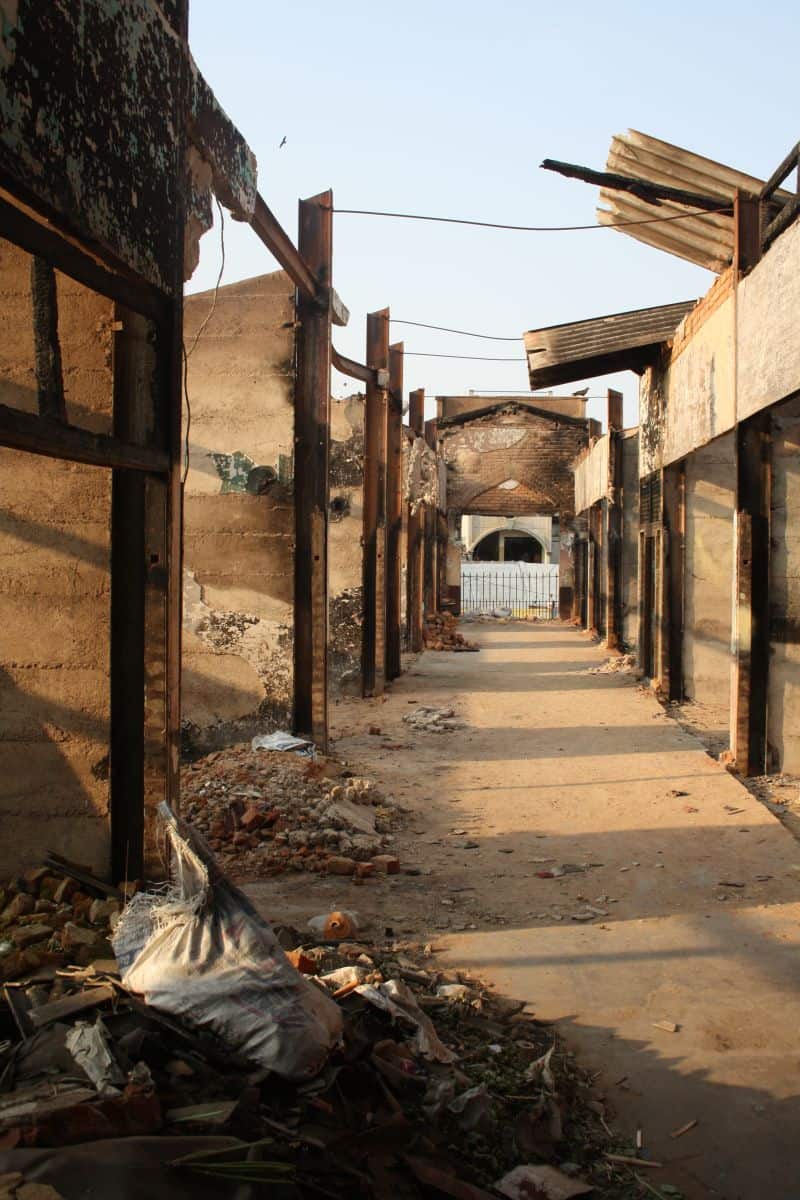 A gutted section stands as a remnant of a fire that is still the subject of suspicion. Pic: Abhishek Angad.

Despite hostility from BBMP, the traders feel confident of their local corporator and MLA’s support. Pervez Ahmed, Secretary-Russell Markets Union said, "We have got full support from our Corporator, Shakeel Ahmed and MLA, Roshan Baig and therefore we will be able to start our work again. Negotiations are continuing with BBMP and we hope that electricity will be restored soon."

According to the traders, not all office bearers of the Russell Market Union run the shops, though they own it. Most of the aid promised by CM Sadananda Gowda, was routed through the union.

The relief-amount ranges from Rs 5,000-44,000 but the traders have used that amount for renovation. Traders says they have also pledged their gold chains and house documents for raising extra money. According to them, Rs.1.6 crores is the total estimated investment required for renovation.

Kaveri Sinhji, CEO of a cultural consulting company, is a regular visitor to the market. A day after the mishap, she decided to start a postcard campaign to aid fire victims.

"I along with my clients love to interact with Russell Market vendors and these people have the shops which have been there for generations. I have about 1000 of pictures of them. I always desired to make postcards of them and this gave me a good reason to start my first set dedicating to the cause", says Kaveri.

The pictures capture Russell Market in its days before the fire, and are now up for sale in the form of postcards. The cards are priced at Rs 100. The postcards also include a cartoon from well known artist Paul Fernandes. As of now postcards worth Rs 11000 have been sold, says Kaveri.

BOX
One can contact BlueFoot Cultural Consultancy (www.bluefoot.in) for post cards. Cash on delivery if anyone ordering more than 10, just send the number and name of the post cards. And pick them up at your convenience if its less then 10.
END

Such is the confusion about Russell Market’s future that even on its heritage status there are multiple views in government. BBMP Commissioner M K Shankarlinge Gowda has denied Russell market being a heritage building, The Hindu has reported. Gowda referred to a rule that for any building to be certified as heritage structure, it has to be at least 100 years old.

And yet, architect Babu disagrees and points to a government document that contradicts Gowda. "As per Revised Master Plan 2015 (Bengaluru city’s master plan) Russell market is declared as a Heritage Protected Area. This means that such old buildings with historic values, cultural values, etc., have to be protected to preserve our culture", he says. ⊕

Budget plans from your BBMP reps

From the budget: Project plans for some South Bangalore wards, and read what corporators plan to do with it.

BBMP’s last Assistant Commissioner for Advertising K Mathai had submitted a series of reports on illegal hoardings in BBMP, to the Commissioner. Here are the first four reports.

Poetry in the city – alive, but not kicking

Has poetry caught on with Bangaloreans, has it captured our hearts?