The Chitrakala Parishath art complex is a landmark on Kumara Krupa road, its distinct stone façade and portico stamping itself on the memory of most visitors. This week however, viewers will be in for a surprise – the entire set of buildings has been swathed in diaphanous white cloth as part of an art project by a student in the college, twenty four year-old Ashray Dravidian, currently pursuing his Bachelor’s Degree in art History at the institution. The ongoing students’ annual show within the galleries seemed an appropriate time for such an experiment. 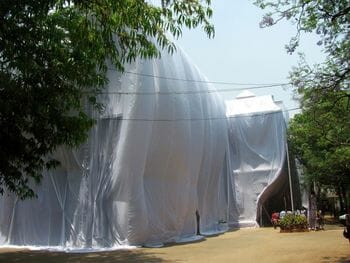 This is not the first time that monumental architecture has been ‘covered’ in this fashion for art. Ashray was inspired by the ambitious projects of the Bulgarian born artist Christo Javacheff, who along with creative partner Jeanne-Claude de Guillebon shrouded several public structures and environmental landmarks. They in turn were originally influenced by Vladimir Tatlin’s edict "real materials in real space".

Some well known ones were the ‘Wrapped Kunsthalle’, Bern, Switzerland, 1968; the Museum of Contemporary Art in Chicago in 1969; a mile-long section of the Australian coastline at Little Bay, north of Sydney and the ‘Wrapped Reichstag, Berlin, 1971-95, the famous German government building enveloped in silver fabric. The Javacheff and Jeanne-Claude pair continued to realise projects in different parts of the world but many still remain as plans due to insurmountable problems to do with administration, permissions, and also costs.

The percentage of people in Bangalore who might have witnessed one of Javacheff and Jeanne-Claude’s works is minimal, so it is a huge treat for the public to have the opportunity to view a project right in the city in such large scale.

But why did Dravidian do such a thing? The plan was in his head for three years, and it took the support of the Parishath management, engineer friends, and film-set knowhow to create the right methodology to realise the project. The work for him blends in layers of meaning – in the first place, he is trying to use the cloth as a unifying symbol for all that lies underneath – painting, sculpture, applied art, graphics, art-history departments: all subsumed under this white blanket. 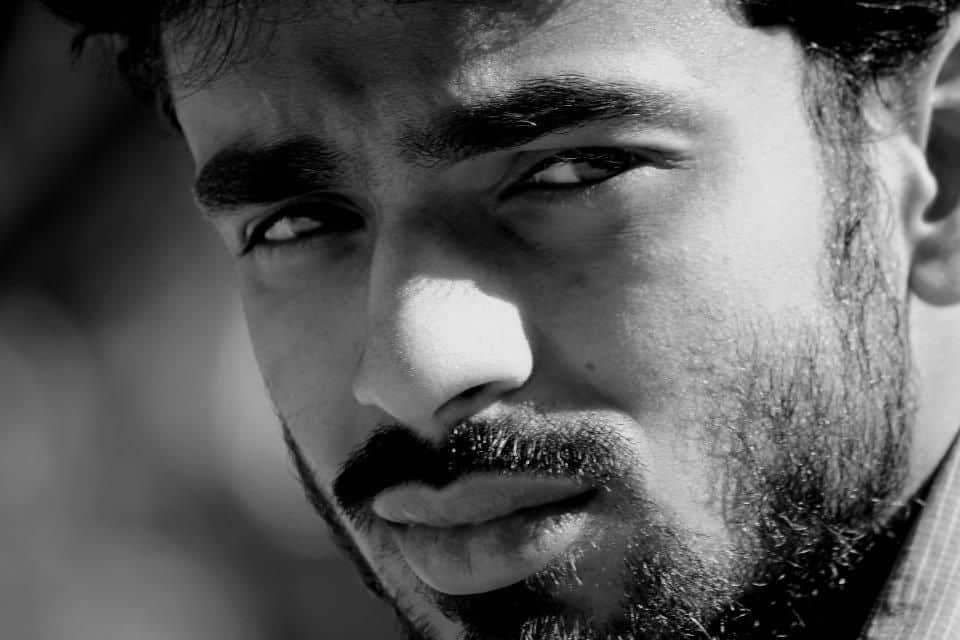 He also explained that it covered the different stages of an artist, in some ways – the hobby artist who attends a workshop in the premises; the amateur who displays work in the galleries; the student who learns the skills of a professional; and the master whose work sits in the Museum, years after he is dead – the workings of the entire art complex under one umbrella.

Dravidian’s prior experience with theatre and film, and his engagement with art history, all had a part to play in the conceptualisation of the project.

For a varied audience, the visual and sensual experience can generate different meanings. Some may recall a magician’s trick, covering the object and making it disappear; others may think of it as a white shroud, encasing that which no longer has life; yet others might be intrigued by the mystery such an act generates; particularly those unfamiliar with the structure’s architectural details. The ballooning material succeeds in softening the sharp corners and the rigid form of the buildings; it takes away its heaviness: conceptually and psychologically.

Most importantly, the cloth provokes thought by its very presence, and that is one of the things we desire from contemporary art practice. ⊕

Re-live the 70s or laugh till hurts; you can take your pick from this week’s releases.

“If I join Anna, I won’t have to pay bribe anymore”

Perhaps the essence of the groundswell for Anna Hazare comes out best in these words. A Bangalore businessman who said this was among the thousands at Freedom Park on Sunday.