News reports say Bengaluru mayor Sharadamma broke into tears when minister R Ashoka threatened to cut her funds allocation unless she apportioned the amount he wanted, to his loyalists. Sharadamma has refuted this, saying that she "did not cry". The point is not whether she did or didn’t cry, but whether it is acceptable for a minister to dictate that the disbursement of funds should satisfy his loyalists, according to his whims rather than leaving it to the mayor’s discretion. 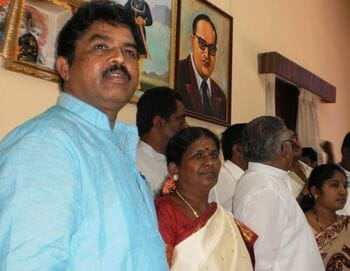 Politics, clearly, is no longer about serving the public and overseeing the best use of public funds, but about buttering up one’s loyalists and supporters. The "kursi" in the corridors of power, is a means of enrichment, of self and one’s family or cronies, at the expense of the taxpayer, and to hell with scams (one unearthed per day, on average), mounds of uncleared garbage along every road (save the ones around the sacred precincts of the Vidhan Soudha or ministers’ bungalows) broken pavement slabs, rubble blocking public pathways, erratic electric and water supplies, even in middle class wards, as scorching summer heat descends upon a city that used to be considered a salubrious hill station and summer resort, till just two decades ago.

Earlier this week I was in Mumbai, and noticed how the roads were swept clean, all along south Mumbai and along the highway leading from the airport into the city, there were no unsightly rubbish heaps as in namma ooru, and the pavements were ‘walkable’, smooth surfaced and clean. Mumbai too has a large migrant population, lots of poverty, but doesn’t seem to have fallen apart the way namma ooru has. The roads were in better shape, traffic flowed better despite the city’s size and sprawl. it is a question of political will, then, and accountability.

Our city has the dubious distinction of being home to 9,600 beggars (that’s the official count, the actual figure is bound to be much higher) and a minister in the state administration is worried about ensuring that public funds go to his loyalists, rather than according to the mayor’s assessment of the city’s needs. This is the same minister who reportedly has seven gas connections at his residence, when most Bangaloreans are facing an acute problem with delayed cylinder supplies.

The old story was about Nero fiddling when Rome was burning, the modern version in Karnataka is about politicians scrambling for power with unseemly obsession while the metropolis degenerates by the day. In the meantime, perhaps there are other Bangaloreans who are, like me, asking some questions, even if only silently:

A five storey building tilted and caved in near Electronic City on March 13, and had to be demolished. The building "clearly violated the panchayat rule which permits only two floors in the area". The police say the building had "no plan approval by any planning authority". In that case, what were the overseeing officials doing, while the building was being raised? After all, a five storey structure does not come up overnight.

Go to any corporation office, and chances are that you will be told that the official you wish to meet is "out on inspection work". What do they inspect? Does no one check that construction does not violate sanctioned plans? How does a builder get away with such blatant and illegal violation, in full view of the public, when law abiding citizens seeking permissions and sanctions are made to run from pillar to post, even for legally correct plans?

The builder gets penalised (presumably) but what about the sanctioning authority who gets paid for not doing his duty?

In the wake of the fracas between lawyers and media persons earlier in the month, and the expose on porngate by TV representatives, we now have the BBMP reportedly deciding to "keep the media at a distance". Private TV channels are, it is being suggested, to be barred from covering legislature sessions.

In a democracy, MLAs sitting in the legislature hall are representatives of the people. Since the people, you and me, and our friends, cannot all be present to watch the proceedings and deliberations by our elected representatives, the media reports on what transpires. We have a right to know what goes on, who said what, and who did what during sessions, the expenses for which are covered by public monies – from your and my pockets.

If adolescent schoolboys flip through risque pictures in magazines hidden under their desks during class, they are punished, even if they claim they were "educating themselves" about life.

Our leaders have always believed in "one law for the people, another for the politicians", whether it is breaking rules, jumping queues, or grabbing facilities out of turn, or sanctioning themselves (or their near and dear ones) land and plum contracts. ⊕

Ravi Krishna Reddy wants to bring back decency into politics. He wants to run a clean campaign and live a corruption-free life if he wins.