It was my turn recently to drop my children off at the school’s appointed bus stop on Hennur Main Road here in Bangalore. I anxiously navigated my way along the road and across it clasping tiny hands, muttering continuous warning to watch out for traffic in the early morning even, and to stop kicking up mud in my face.

Having deposited my sons on a mound of concrete, I surveyed the scene. A man was walking a dog. My son pointed to him excitedly and said "There he is again. He’s got only one dog today." I shared in their indulgence looking at the creature with fondness. An odd stray that I perceived later would not merit such a look.

Over the next few days in addition to my anxiety about getting across without getting knocked down or dirty increased, I also realized to my consternation, that besides the above mentioned dangers, I was now looking at a small pile of freshly laid dog excreta. Here was one more piece of trash on the already littered road side. I now looked at anyone walking a dog suspiciously. Woe on anyone whose foot may have accidentally trod on that innocuous pile. Not even the strongest cleaning agents can wipe away the irritation and lingering malodor! 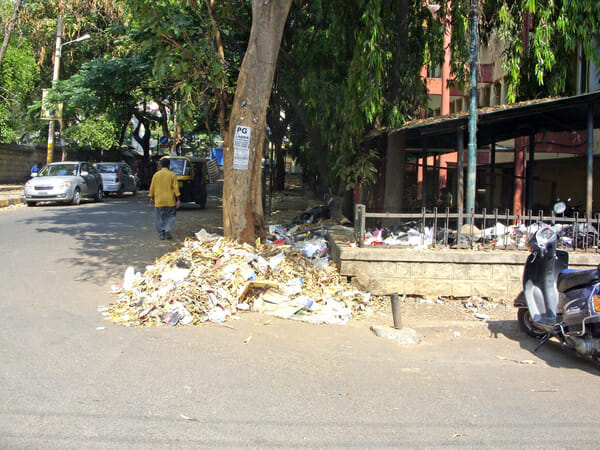 "Do you know we are trashing up mother earth?! My son asked somewhat bewildered. "What about your mother and the cleaning she has to do at home after you?" I countered. "That’s different" he replied, "it’s not dangerous". "Sure it is" I replied, "I am getting tired and sick of having to clean up so much".

I wondered if the larger malaise of ignoring our civic duty lay in the way we treated our home. Having become accustomed to cleaning our home for many years now, I find it easier to maintain and organize chores promptly rather than having to go in for a spring cleaning once in a way.

Many of us are used to our beds being made, toilets cleaned, homes being swept and mopped and trash taken out. Because we do not directly undertake any of these chores, we tend to take this maintenance for granted. After all someone is sure to clean up after us. Given this sense of a lack of accountability, it is no surprise that we feel free to litter our roads with candy wrappers, plastic bottles, an odd piece of rag, spit and even dog poop.

In his book "Light on Life", yoga guru B K S Iyengar expounds the ideal of cleanliness as being next to Godliness. He explains that the act of cleansing oneself is to purify oneself before offering one’s service to God. According to him, even the act of cooking involved the ritual of cleansing before one started to cook. The idea here is that when clean hands prepare the food, what we intake is also clean. Indeed our entire lifestyle traditionally encouraged the idea of living a simple and clean life.

Like the clichéd paradox that India is touted to be, even her scenery is a juxtaposition of verdant life and decay. At times I am appalled at the amount of garbage lying about in a bustling street. People go about their business seemingly unaffected by the stench and the fact that they have to skillfully maneuver their way around the mess.

A drive around the city elicits mixed reactions from me. I do not remember Bangalore the way it used to be. I don’t even know what Bangalore used to be like anymore. I go by what long-time residents tell me it used to be. Memory plays tricks on me.

Cubbon Park is not what I think I remember it to be. And as we drive past, I see a man freely use park premises to micturate. This is a familiar sight every time I drive by the city now. Even outside, past the gate of the apartment complex I now live in, there is a stench that overpowers my senses.

Come monsoon and the scenario will worsen. Apart from the steady stream of debris and mud collected over a period of time from the numerous constructions in the city, our own fresh addition to the trash and excrement will only cause a flowing cloudy stream of disgust.

The area on Hennur Main Road near the Hennur Bus Depot is a common pick area for a number of school children. Besides the daily hazards of navigating traffic, errant drivers and a footpath that cannot be used, there is no telling what havoc the onset of rains might play.

Obviously disarray and decay are as much a part of our world as order and cleanliness. The extent to which we share in the process of being responsible for our environment is what makes the difference. We can start this practice at home by ensuring that we are responsible for small tasks such as throwing waste in the bin, clearing our own plates after a meal, keep our toilets clean, tidying up our beds ever morning and cleaning up after we have worked or played. When children learn to respect property they extend this attitude to the outside because they see it as an extension of their world.

Larger issues require the attention of civic authorities where sanitation and hygiene are priorities so that there is no compulsion to pollute the premises. A traffic signal, a visible pedestrian crossing, a well paved footpath are some of the basic requirements that might go a long way into preventing accidents and making the area more safer as well as convenient for the numerous residents who proceed on foot for an early morning walk, to take a bus or go shopping.

Caste, issues of untouchability and poverty reduce many a man, woman or child to the role of a rag picker, trash sorter and collector. Not only are these jobs hazardous but can also cause more refuse being strewn around the streets as depravity encourages scrounging around trash cans and garbage trucks. We have to come up with a more humane system to dispose our refuse so that our responsibility does not end at our doorstep. Sorting out trash into waste that can be recycled is also a way to ensure our part in the sorting out process.

Urban development is lopsided when we do not take into account our environment and care for it. Over the years both natural disasters as well as man-made ones are all indications that we have gone too far and that none of us can escape the collective consequences of such a desecration to nature. Let us not wait for another plague or landslide as our wake up call.

I first heard about the pooper scooper when I was a novice Teaching Assistant during my first year at a University in the United States. My class of 20, were trying to explain the concept of picking up after one’s dog, during a session. I was amused at first and subsequently surprised at the importance this played in the idea of a civic society.

It is inline with this that I came to appreciate special trash cans with disposable garbage bag rolls in the apartment complex in the US I was recently living in, before moving to Bangalore. It made walking with a light step a truly memorable experience. I noticed that people took pride not only in maintain their homes but also their premises. Our sense of loyalty and commitment to the community we live in also extends to the way we treat our neighbours and our surroundings. ⊕

About Supriya D Gopinath 1 Article
The author has not yet added any personal or biographical info to her or his author profile.

Nirbhaya documentary debate: An opportunity to re-define our future

Though BBC’s ‘India’s Daughter’ has been banned, the debate around the documentary creates an opportunity to think about how we can make the future safe for our children. Inculcating a value system and making children a part of policy formation process is the way to go.

This is what Bengaluru Blueprint group members have to say

What do the members of Bangalure Blue Print Action Group say regarding the committee and its clash with Metropolitan Planning Committee? We spoke to a few of them and this is what they had to say.