Cricket is his first love. He learned English language listening to cricket commentaries. He loves Kannada movies, he always scored well in his history papers. He never let visual impairment come in the way of life. Today he has made computer education easily accessible for visually challenged students and encourages them to participate in sports. 41-year-old Mahantesh G Kivadasannavar won the NDTV Sports Award, against the odds (lifetime achievement) in February 2012. Kivadasannavar founded Samarthanam Trust for the Disabled in 1997, along with his two friends. This JP Nagar resident, is today the Managing Trustee and has great plans for the organisation. 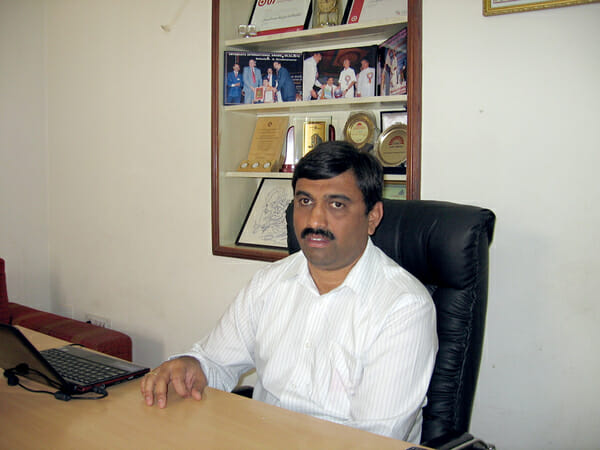 What brought you to Bangalore?

My childhood was in Belgaum, I had no formal education there, as there were no blind schools. Later, my father learnt about schools for blind in Bangalore. In 1981, I came to Bangalore and joined the Shree Ramana Maharishi Academy in for the Blind in JP Nagar. We had trimester system, we could move to the next class sooner. In that way, I completed 10 years of studies in 6 years. Later joined National College, completed my MA in English literature. Also was teaching literature for a while at the Law College in Bangalore.

What led you to start Samarthanam?

It was not about one incident, but it was a time when I realised that not everybody had access to the facilities I received. All blind students faced the same problem but I had access to the solutions. I knew number of people who helped and wanted to help others, who were willing to spend time and generously fund. That led to the idea of creating a platform where visually challenged students had an opportunity to study further. That was Samarthanam.

How do you see the growth of Samarthanam?

We did not want to just give a name and start asking for funds. We started from scratch, so we conducted events, got sponsorships, we created a brand first. People started associating themselves with us. Bangaloreans have helped us generously.

Computer education has made a huge difference to students; it helps them in expanding their view. We believe in creating opportunities. We have call center training, computer education, cricket coaching, dance training for students here. Variety has been our success.

Where do you see Samarthanam going from here?

Personally, I am contented but the organisation has to grow and should reach out to the last disabled person. I want to Samarthanam to be a pan indian organisation and reach all major cities and rural pockets of India.

Now we are building a disabled friendly residential school building, which have no barricades, no obstacles, where they can move around easily.

Samarthanam to me is not a profession; it is a part of me.

You recently received the NDTV Sports Award Feb 2012. How important are these awards for you?

I was very happy to have received the award. Awards are very important, as they open up numerous opportunities in many ways. It helps us in reaching more number of people who are willing to help us. Media coverage brings a positive impact.

There is a lot spoken about the cricket matches being held for the visually impaired, do you personally like the game?

We won the Indo Pak Bilateral Blind Cricket Series. Soon we will have T20 matches for blind. Personally, I am Cricket crazy. When I was a kid, I would follow every bit of cricket. I used to plan my day according to cricket matches. I would listen to radio all day. I started learning English through cricket commentaries. Cricket is relatively a slow game when compared to football and hockey. It gives you time to think. It is a mind game with strategy. Cricket did a lot to me; it can do a lot to others too.

What are your interests other than Cricket?

I like playing Chess, listening to music, news and sports commentaries. I enjoy traveling a lot. I always find a reason to get out. I am a big fan of Kannada movies. I have watched almost all Kannada movies released between 1973- 2000.

I do not get to spend much time with my family, but my wife understands. I try to spend as much time as I can with my son and daughter.⊕

Data-based decisions will help BBMP thwart infrastructure problems forever. That’s what Bengaluru needs to do: letting data and metrics shape the future of the city.

IT has been announced recently for the collection of tax for the year 2010-11 with a rebate of 5% only upto 30th April 2010. This period being the bottleneck of the year, where previous years

Hopes for the new year

Here’s a new year wish, this city of yours and mine
fares better in 2009.