Bangalore-based Environment Support Group was given the 2012 UN-Water "Water for Life" Best Practices Award for it unprecedented legal work on protection of Bangalore’s lakes. ESG’s trustee and coordinator Leo Saldanha received the award at a ceremony held at the headquarters of the UN Food and Agriculture Organisation, at Rome on 22nd March, World Water Day.

As some readers may already know, ESG has been on a major initiative for several years to protect Bangalore’s lakes. Its litigation work has led to direct supervision of local government protection efforts by the Karnataka High Court itself. 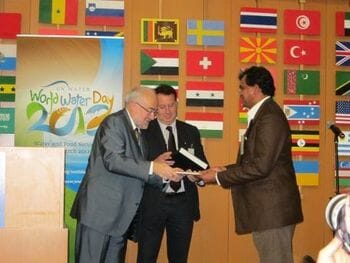 The UN has called ESG’s work an "outstanding contribution towards the conservation of water bodies in Bangalore, India". It has also commended ESG for its demonstrable and tangible impact the greater Bangalore region with implications for both rural and urban areas.

Speaking to Citizen Matters, Saldanha credits Karnataka High Court for its unprecedented support and progression of law. "Protecting our water bodies is to ensure ecological and water security. Court’s initiative ensures that our governance system attends to people’s real needs. This can influence similar efforts across the world," he says.

Saldanha also thanks families of ESG staff, volunteers, media, and also government officers who went out of their way to adopt progressive measures.

According to the United Nations, the purpose of the awards is to "promote efforts to fulfil international commitments made on water and water-related issues by 2015 through recognition of outstanding best practices that can ensure the long-term sustainable management of water
resources".

The United Nations Office to Support the International Decade for Action "Water for Life" 2005-2015 received a total of 22 applications for the ‘Best water management practices’ category under which ESG has been awarded. Applications were received from Africa, Asia, Europe, Latin America and the Caribbean.

ESG is a Public Charitable Trust with clearance to receive donations per Foreign Contribution Regulation Act.

Not too long ago these lake systems served to harvest rain in this semi-arid region. This helped recharge groundwater, sustain agriculture and supported fishing communities. The lakes also evolved as functional wetland ecosystems, especially as critical habitats for migratory birds.

Built over several centuries, the water collected in such series of small interconnected lakes also supported a post-monsoon non-rainfed crop by farmers while also extended water security to horticulture farms.

Today, in rapidly urbanising Bengaluru, these also lakes provide a opportunity build water and ecological security for the densely populated metropolitan region. Instead, as Citizen Matters has reported and exposed in several reports over the past few years, there has been rapid deterioration of the interconnected lakes systems and their watersheds due to massive and government-abetted encroachment, diversion of lake lands to urban and infrastructure development and their acute pollution by sewage, industrial effluents and solid waste.

Over the past two decades alone, over 150 lakes have disappeared due to rapid urbanisation, poor land use management, weak regulation, administrative and political apathy and the abject neglect of public involvement in their maintenance.

Of the approximately 450 lakes now left in 1400 sq. kms. (approximately), most are heavily polluted and their canal networks deliberately turned into sewers. This has magnified the problem of surface water pollution and in turn affected the quality of groundwater aquifers, thus turning the situation into a major public health concern.

The UN award for ESG comes in this context.

Giving your time to make life a little bit easier for someone else is a happy experience. A dentist shares her experience of a camp for special kids.