Last month, around 400 residents under BESCOM’s S6 subdivision, JP Nagar, were in for a shock. Their bill reflected a penalty ranging from Rs 4000 to Rs 1.1 lakhs. Upon enquiry, they found out that the penalty was for not entering into an agreement with BESCOM at the time of shifting into LT3 consumer category. The overall penalty charges amounted to around Rs 43 lakh. 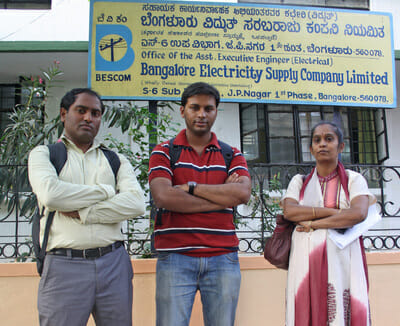 In May 2010, there was a major shifting of electricity installations from residential (LT2) to commercial (LT3) in the S6 subdivision of BESCOM. The department had earlier penalised residents who used to run their homes for commercial purposes such as paying guest houses, but had LT2 installations. Soon all residents changed their connection to LT3. Since then the electricity bill has reflected LT3 connection and commercial charges.

Residents say, they were not told about the agreement. Pradeep Nagaraja, 28, owner of a house in BTM layout and was penalised 1 Lakh says, "the hitch was that in the process of conversion from LT2- LT3 there was a minor paper work, of getting into an agreement at BESCOM for using LT3 connection. But it was not informed to us."

Though the penalties shocked the residents and they had to take considerable time out to sort this out, BESCOM has responded positively.

In an e-mail reply to one of the residents, AE to MD, Navneet stated, "we regret the inconvenience caused to you. Our local officers could have guided you properly in this issue. But kindly understand the procedure of grievance redressal. You need to call our 24×7 helpline for any issues regarding BESCOM. Upon that, docket number is generated and complaint is followed up. Kindly call up 22873333 or email to bescomcomplaints@gmail.com"

The reply further stated, "instead of that, if you interact with the local officers, they may not be in a position to prioritise your grievance, as their work rules are different. We are trying to bring in discipline in the organisation. So,unless your complaint gets a docket number, it is out of the radar and hence left to the discretion of the local officer."

According to the process, there should be a notice sent stating the need for the agreement by registered post or by hand or should be stuck on the resident’s gates or walls, which should be clearly visible. But there was no notice. Neither was the connection cut off within three months, as specified by the KPTCL guidelines.

Pradeep actively started looking for the solutions. It was during the Customer interaction meeting, Anand Mangalam, Indian Against Corruption came to know that around 400 families have been affected due to this Back billing charges for no fault of theirs. Since there was no loss of revenue to BESCOM and more of procedural lapse both on part of BESCOM and customer, he felt that a huge penalty was not justified and therefore they collectively approached senior management of BESCOM.

BESCOM MD, P Mannivannan directed Superintendent Engineer-South, Nagarjuna to re-verify the case. Nagarjuna’s internal investigations also proved there was no malafide intentions from the consumer side. Therefore the back-billing charges was stayed but officially consumers still await the formal response from BESCOM.

Anand Mangalam says, "We got stay on BBC within eight hours of e-mail sent to BESCOM-MD. We also received a prompt reply stating that SE south has been assigned to investigate and reply in eight days. With ten days I got a mail from MD BESCOM office approving the reversal of BBC . The consumers were extremely impressed by the agility and prompt response from BESCOM."

C P Manjunath, Assistant Executive Engineer Electric, S6 , Sub-Divison, JP Nagar says, "we have prepared the drafts and just waiting for the internal communication to get the notice circulated among our employees and affected residents concerned." ⊕

BDA botches up the steel flyover issue by hiding information

The government not following the due process in the steel flyover issue has irked many public policy experts, while the Bengaluru Development Authority helped the controversy by hiding the information and refusing to share the data that was already in public domain.

BBMP is restoring 18 lakes, for which Rs 174.11 crore has been allocated. The rest are being split up between BDA, LDA and KFD.

A lorry owners’ association flyer was making the rounds at the airport toll gates on Bellary Road during the frenzy earlier this week. Transporters accused NHAI of robbery.