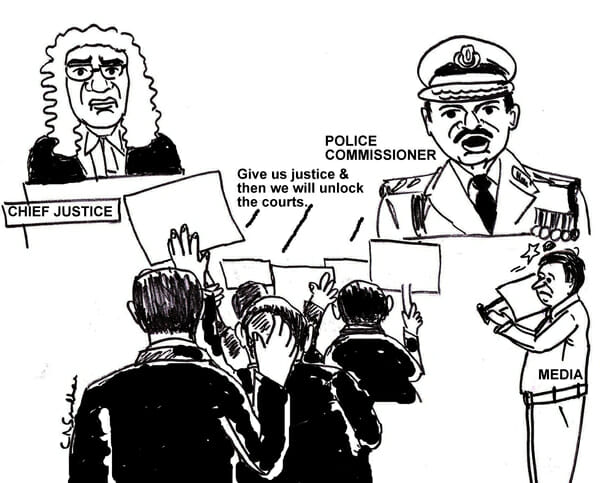 On the evening of March 20st, as this article was published, lawyers decided to call off the strike for a few days. This was in response to Karnataka Home Minister R Ashoka’s order to transfer DCP(Central) G Ramesh and ACP K N Jitendranath. Lawyers say, however, that they are continuing to demand resignation of Ashoka himself.

Also, DGP (CID) R K Dutta’s report to Karnataka’s Home Secretary has confirmed that police did not follow due procedure during the lathi-charge on advocates on March 2nd, according to media reports.

Lawyers say it is now a wait-and-watch mode for some days as they look forward for more government action.

The March 2nd incident has created a lockdown at the city’s courts. Pic: Harish Prabhu.

The lawyers are angry over the fact that none of the four High Court judges advised the Principal City Civil Judge and Sessions Judge to lodge a complaint after March 2nd incident. Also, on a query made by an advocate to a judge of High Court, the court replied that ‘there was not enough material to lodge a complaint against the police or the media’.

It appears that the responses from higher judiciary have made lawyers feel left out. B T Venkatesh, advocate at the Karnataka High Court and Executive Director of Reach Law says that the police have not been registering cases lodged by lawyers. He adds that lawyers have pointed this out to the Chief Justice. "He seems not to have heard the same. He does not take any suo motu action", says Venkatesh.

"Judges fail to lodge complaints, senior judges advise junior colleagues not to lodge complaints though cops abused 20 plus judges and beat one. Therefore we have complained this to Chief Justice Of India and will continue our strike", says Venkatesh.

Lawyers who have boycotted civil, sessions and magistrate courts since March 2nd tried filing a writ petition seeking action. But the case was not listed by the Chief Justice of Karnataka. CJ has been demanding recall of the boycott before any action.

Venkatesh further adds, "Everyday we are in the CJ’s court begging him to take some action but the judge treats us virtually like scum. He tells us to withdraw the boycott for any action. What boycott has to do with a public interest litigation?"

The lawyers have demanded the law minister and home minister to resign, action being taken against the police officers who were in-charge on March 2nd, including state Director General and Inspector General (DG&IG) of Police Shanker Bidari and Bengaluru Commissioner of Police B G Jyotiprakash Mirji, and against some media personnel for provoking the outrage. They also went on indefinite hunger strike within the court campus but were removed by the cops early morning. Later they weren’t allowed to protest in the court premises and were ordered by a judge to leave.

Lakshmy Iyengar, 38, a Bangalore based lawyer who has a corporate and family-court practice, says, that lawyers have been on strike because their demands have not been met despite being promised otherwise. "We have asked for transfer of the senior police officers as they did not have the authority and permission to enter the court premises and lathi-charge the lawyers. The police did not have the permission of the principal Civil Judge through the Registrar to enter the courts. It is unfortunate that the judiciary has failed to support us knowing fully well that we are not at fault", says Lakshmy.

The police assault on lawyers which was not originally highlighted by the media has stoked tension between between the city’s media and lawyer communities. Lawyers are angry over the media ‘bias’ to show a one-sided picture, and also towards cops, who allegedly went on rampage in the court.

It all started on January 17th when three lawyers broke the law while driving triples on a two-wheeler and were caught by a policeman. The story that came out was that the lawyers did not comply with the policeman and slapped him instead. But, Lakshmy Iyengar gave Citizen Matters a different account.

"The constable and the Hoysala police slapped the lawyer, took him to the police station and thrashed him. The lawyers sought an audience with the Commissioner of Police but were denied . They were threatened of lathi-charge if they didn’t leave. The lawyers therefore protested but the police forced them out on to the road and then media reported that we brought Bangalore’s traffic to stand still", says Lakshmy.

It appears that following this event, lawyers were upset with the media and the incident of March 2nd was a major repercussion. According to the lawyers, media personnel were not allowed by lawyers to enter the court hall where BJP Leader G Janardhan Reddy’s hearing was continuing. This later resulted in a skirmish between lawyers and media persons. Media persons were chased and beaten up by lawyers. In return cops entered the premises and lawyers too were beaten up, which went unreported.

At the same time lawyers also claim that 150 black coats were sold from their society a day before and there could be a possibility of anti-social elements pretending to be lawyers.

Aditya Sondhi, 37, another lawyer based in Bangalore is taking a different position from the majority even as he is critical at the treatment meted out to the lawyers. "I do not support the strike", says Sondhi, but adds that he wants the full picture to be presented to the citizens. "We have been only hearing about instances of some abuse by lawyers and there are some photographs as well. But there was violence against innocent lawyers too. One has to get the entire picture and people should know the kind of violence perpetrated against innocent lawyers who were not involved in any kind of violence." Sondhi is an advocate at High Court of Karnataka and the Supreme Court of India.

As the scuffle continues there remain a few questions for which lawyers are seeking answers. Who authorised the police to inflict violence against lawyers inside the court hall? Was there any need to beat up a lawyer on his head? Was there such a threat from all lawyers that the police was acting on self defence? ⊕

A city-based lawyer Harish Prabhu uploaded a video film on Facebook following the incidents of March 2nd, that presents the lawyers’ perspective. Subsequently the video was posted on Youtube on March 9th. The video has been compiled from footage shot through mobile cameras of different lawyers, with a woman doing background narrration. The film runs for 26 mins. It contains scenes of violence and viewer discretion is advised.

Note: There are strong opinions in the video. Citizen Matters is uploading the video link in this article for informational purposes and this is not an endorsement of the views of the lawyers.

She represents the best of citizen activism

Manvel Alur, 44, CEO and Founder of Environmental Synergies in Development, represents the best of citizen activism in Koramangala.

A peek at Bangalore One services

What’s available and what’s not in your local Bangalore One service center.