CAG (Comptroller and Auditor General of India) has unearthed yet another BBMP scam. This time it is about the excess payment of over Rs 90 lakhs paid to two contractors for drain de-silting works in 2009. Despite spending 1.65 crore rupees on these two rajakaluves, it is not clear how much work was actually done, as BBMP officials had manipulated the work records. This has come out in the 2008-10 audit of BBMP by CAG.

Tenders were not called

According to the Karnataka Transparency in Public Procurements Act, 1999, tenders have to be called for such works. But in August 2008, the then-BBMP Commissioner S Subramanya requested state government to exempt these two works from the Act, saying that the works were urgent and that there was no time to invite tenders. Government allowed the exemption.

How they fudged figures

What followed was manipulation of work estimates and records. The Executive Engineer (EE) of SWD, Hebbal valley, who had awarded the works, had inflated the estimated rates. For works not awarded by tenders, rates are fixed based on Schedule of Rates (SR) specified by the state government. 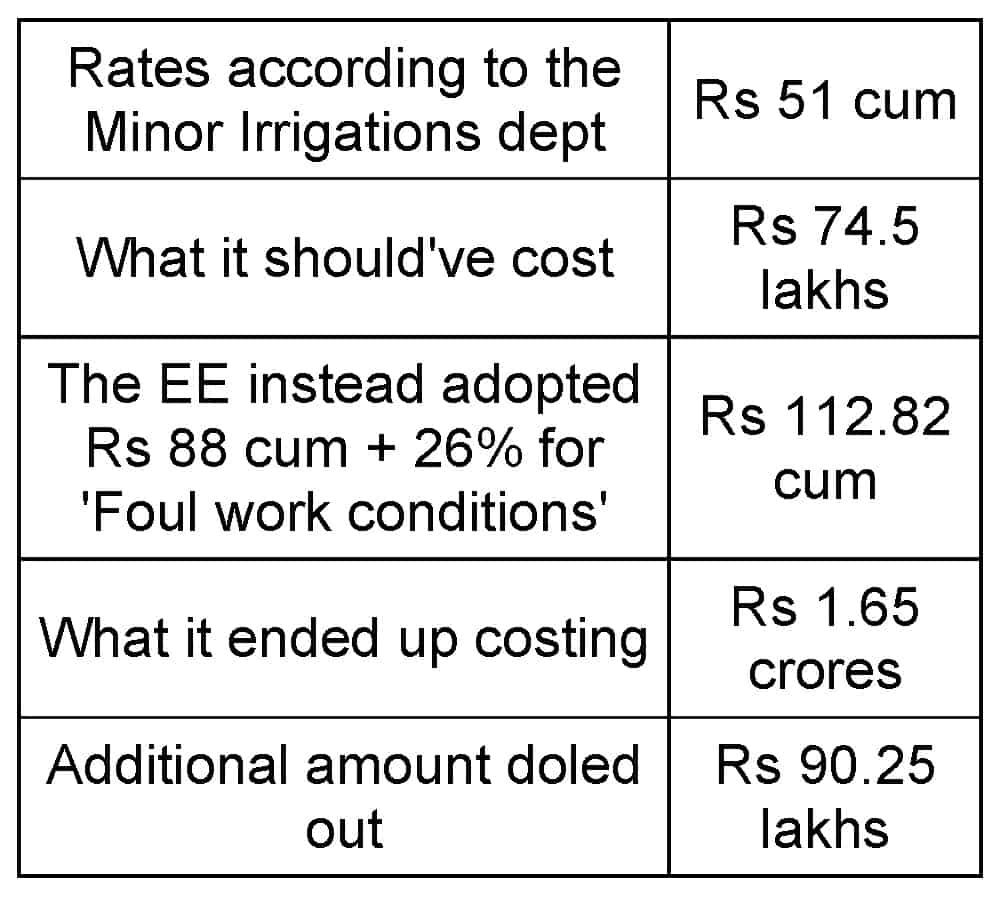 There was no urgency

The argument that the works were urgent was also moot, as BBMP proceeded very slowly after getting the government exemption in August 2008. It was almost a year later, only in July 2009, that SWD department got BBMP Administrator Dilip Rau’s final approval for the works. (Decision making was done by the Administrator at the time as there was no elected Council.)

CAG report says that while giving approval, Rau had observed that the delay in starting works defeated the purpose of exemption. Tenders should have been called during the period of delay so that works could be given at lower amounts, he had said.

Despite all this work was incomplete

The report also raises doubts on whether the work was completed at all, since documents related to it had been manipulated. For instance, the EE had awarded works to the contractors in January 2009, even before getting CE’s and Administrator’s sanctions, and before making terms of entrustment (conditions set for taking up work). But EE’s checklist mentions that one of the two works had started in November 2008 itself.

No proof of completion of work

Contractors have to submit photos showing progress of work while submitting bills to BBMP for reimbursement. The photos they have submitted were also dated November 2008; these were of distant pictures of a stationery excavator.

Dates of work fudged too

Also, before de-silting work starts, measurements have to be taken so that extent of work done can be determined. Here, these pre-measurements are dated April and July 2009 for the two works, even though work was happening in November 2008.

CAG says that since pre-measurement records are not valid, it is not clear if the work was done at all. It recommends a detailed investigation on the issue. Though CAG had written to the state government in January 2011, it had not got any reply as of March 2011.⊕

Housing cooperatives: Are they serving the purpose?

Many housing cooperatives have hit the headlines for all wrong reasons: violation of rules, mismanagement, non-allotment of sites and more. The question is, have they forgotten the original purpose behind their formation?

Can you survive Bengaluru without Kannada?

Life may have gotten easier for non-Kannadigas in Bangalore, with new-age jobs and comforts. But will young people find a future Bengaluru an alienating place if they don’t know Kannada? A Citizen Matters special for November 1st, Rajyotsava Day.