The auto fares in Bengaluru have been revised as on 12 March, 2012. Are the auto drivers happy? No! Neither are the commuters. Around 2.5 years ago the minimum fare used to be Rs 14 and the Auto LPG gas price was Rs 37.33 per litre and now when the gas costs around Rs 49 per litre, the minimum auto fare still remains Rs 20.

But fare hike is not the only issue here.

The auto drivers toil and work hard but most manage meagre earning of Rs 250 a day. The commuters however think they are being taken for a ride. 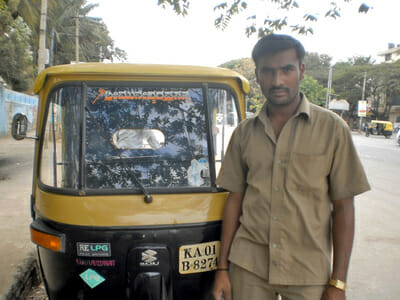 They seemed to be annoyed with auto drivers about their attitude to such an extent that one of user’s update on Social Media website read, ‘Avoid Auto! Save Money! Take a bus! Wait a little’. Most commuters want to take his suggestion as they are livid over the attitude of the auto drivers. One can speak to any commuter and the angst against these auto drivers is palpable.

Abhijeet Anand, 28, an IT professional, who frequently travels by auto says, “one can understand the fare hike but these drivers blatantly refuse to go even for short distances. Even to long distances like HSR or outer ring road it’s hard to convince them. I stay at Koramangla and sometimes it is really difficult to get an auto ready to go exactly on meter. I am just upset over the services they provide.”

C Amravati, 35, tailor by profession often travels from Taverekare to RT Nagar by autorickshaw. Annoyed by the services she speaks, “even for short distances they charge minimum of Rs 30. Sometimes they don’t even understand the sense of urgency even if it is for hospital and they refuse. “

K Rahul, an IT administrator in a computer reseller’s shop seemed angry over the tampered meter. He told that he was unhappy about the hike but deeply sad about the way these drivers operate. He snapped, “almost on a daily basis I end up paying Rs 20 extra on meter for any destination. Apart from this the meter seems tampered. For the same destination fare varies.”

Auto drivers know it is hard on passengers

Auto drivers who spoke to Citizen Matters agreed the fare hike is not going down well with commuters. Saeed Shair Ali, a middle aged auto driver from Koramangala says, “I am not happy with the upward revision of fare. We survive on passengers using autos, this revision won’t make them comfortable. On the other hand there is no option left with us. The prices of gas has gone up, every time there is a price rise we spend around Rs. 500 to re-calibrate the meter. The burden seems so much.”

Autorickshaw driver’s union general secretary Manjunath says, “It’s just that the LPG auto gas prices have gone up we have to revise the fare. Drivers won’t survive as some drivers who don’t own the autos earn only Rs 350 a day. There is no facility from the government either for us.”

As soon as the LPG Auto gas price was revised the autorickshaw unions demanded minimum fare revised to Rs 24 amounting to Rs 12 per kilometer. But after several discussions and a strike, a common consensus reached out on Rs 20 as minimum fare.

K M Manjunath, 28, another auto driver and resident of Koramangala 1st block says, “It will not make a big difference on our income, as initially when minimum fare was Rs 17, people usually paid us Rs 20. Now, that the gas prices have gone up, it is getting a little difficult. They should have increased it to at least Rs 22 or more.” ⊕

The play, currently on under the ‘Other Voices’ initiative at Ranga Shankara, effectively highlights the fall out of mindless urbanisation.

E-rickshaws as antidote to air pollution: Hope for Bengaluru or pipe-dream?