The recently concluded National Masters Athletic Championships held at Kanteerava stadium , in the last week of Febraury, served to highlight several challenges stunting the growth of sports in India as well as avenues for improvement of the state of sports in India and not just for Masters athletes. 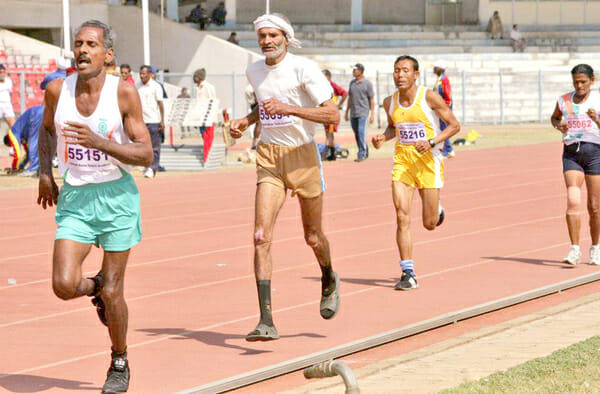 For one, there were very few people who knew about the event in the country, let alon ein Bangalore. The fact that a copy of the event schedule was not available till the first day of the meet didn’t aid matters. The Masters Athletics Federation of India (MAFI) does not have a website and there were no regular press releases.

Despite several attempts, a copy of the complete results for the event were not available even with some of the MAFI members, even a day after the event. The Hindu and some other Kannada newspapers did report on the event, but even the Hindu published only a list of winners in each event, rather than the top three places in each event. It was little wonder that in an event with nearly 3500 participants there were not half that number in the galleries.

The tight budget for the event combined with the almost complete absence of sponsorships from regular companies in healthcare and sports, reflected the funding challenges faced by the organisers. But their efforts to provide accommodation and food to all participants during the event did come in for some praise. Karnataka government did promise to foot some part of the bill but that was to come after the event.

Most of the above reflect a general failure of the sports setup in India
● Lack of adequate support and interest from the average citizen
● Apathy of officials to the needs of athletes
● Lack of organising capability of bodies beyond conducting the events and fund-raising
● Near absence of a communication strategy for the event and
● Information rationing worthy of a seasoned bureaucrat.

From a brief interview with both the Masters Athletics Federation of India (MAFI) as well as the top officials of World Masters Athletics (WMA) who were visiting Bangalore during the event, it appears that the issue of sponsorship is not an issue restricted to India. In fact, India seems to fare better on that account since some state associations seem to provide partial or full support for travel and other expenses to their athletes. Some states seem to go beyond that, rewarding medal winners in the form of cash prizes.

It is rather puzzling to note that an event devoted to an ageing population which is evidence of the benefits of regular exercise as well as an opportunity for families and friends of participating athletes to engage themselves in a healthy pursuit should face this situation. And the athletes in India pay just one fee regardless of the number of events they participate in, rather than pay per event as in Masters events outside India. MAFI also ends up paying a daily fee for the usage of the stadium for an event, despite being a non-profit body. Surely the government which is the ultimate owner of the public facility could support the event’s infrastructure.

There were different officials calling out wrong lap numbers in a distance event to the utter frustration of the athletes. On the other hand there were names of participants missing from the starting rosters for events. Spectators could freely crossing in front of the hammer throw event during the event. These only served to highlight the gaps in capabilities of the organisation. In another departure from what appears to be the norm outside, the MAFI pays its officials while officials in events outside India are largely volunteers.

Most events started later than planned in some cases over two-hours late. For an athlete, whose actual event may not take more than a minute – as in the case of jumps or sprint events, such delays can cause cast differences in performance.

A good starting step to break the vicious circle would be increase the transparency of the functioning of sports bodies. The equally important step would be to engage of both active & retired sportspersons in the organisations.

Which school board for your child?

Many of Bangalore’s schools now offer national and international boards of education in addition to the state board, with innovation around the curricula. How do parents and students choose?

Pavement Perorations – Part 2: Can pavements be used for walking?

I kind of got hooked on this quiz thingy.  And while it is a bit strange to be asking and answering the questions myself, I love the fact that I know all the answers. My