TAAQADEMY in Koramangala is the result of the band, Thermal and A Quarter’s 16 year old tryst with music. This 3-month-old academy teaches music-making and song-writing as well as playing instruments and is also conceived as a space for musicians and bands to practice or hang out: ‘Make Space for Music’ is TAAQADEMY’s sweet demand of us. 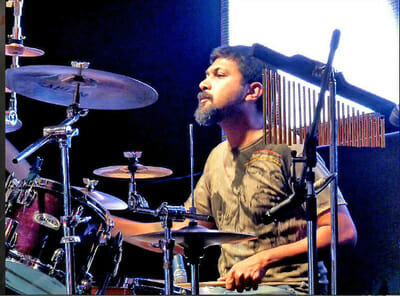 The story behind this academy started four years ago, on Queen’s Road. It is intricately linked to the journey its members themselves made since starting as a band in Christ College in 1996. 23 thousand people ‘like’ it on Facebook alone; the music has been played to audiences of over 50 thousand. TAAQ is known for its unique collaborations with musicians pursuing different forms and styles.

Rajeev Rajagopal, 35, drummer, tells me that with time and change of setting and activities, the latest of which are the children in their lives, their music has grown as well. They assimilate their various life-experiences into their music and this is itself, according to him, how their music takes shape.

The ‘setting’ for the music here is none other then good-old but changing Bangalore(uru). Its many vibrant colours are reflected in the band’s musical choices as well as lyrics. The band, in fact, describes its music as ‘Bangalore Rock’! "Do you know what I mean?" asks Rajagopal urgently, he needs to know if I grew up in the city, because otherwise I wouldn’t understand. 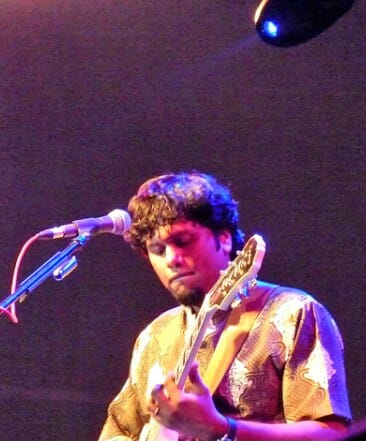 ‘Bangalore Rock,’ we need to note, began because of an earlier cosmopolitanism that Bangalore held within it before the big changes. Does this band represent the cosmopolitan nature of the city or was it a result of it?

Rajagopal recalls how they were one of the earliest bands playing western music when one could count the number of bands in the city on one’s fingers. No instruments were available and many of the members were self-taught, music lessons were not easy to find: "Proud to say that we survived in a pre-internet era" says Rajagopal.

Bruce Lee Mani, 34, Guitarist and Vocalist, who finished up a class to make time for a chat also, acknowledges the difficulty of being in the creative fields in India. He taught English for a while to support himself and Rajagopal worked for the IT sector briefly. Prakash K N plays the Base Guitar for the band.

Thermal and A Quarter however was caught in the spectrum of opinions that deigned attempts in western music as either aping the west or as the introduction of new form of music. Rajagopal recalls the images of western music at that time-the death and destruction claims of heavy metalists-and says that there were a good share of prejudices and stereotypes to deal with.

There is the British legacy in Bangalore, and we went to convent schools and are comfortable with English, they say. "We must be good at what we do", they insist in an impressive student-like steadfastness and adherence to quality rendition.

Rajagopal recalls how people said they got a bit of Bangalore during performances in other cities and also how villagers in Cochin got seriously hooked on to their music once. "It’s been a long journey", he says as he tries to remember more such occasions but gives up because there are one too many.

The sounds of ‘Bangalore Rock’ make us pause, listen and experience. The style demands that each piece of music be judged individually. Folk, Hindustani, Jazz, Rock, Pop and more are its verve, but this is no fusion music, its depth comes from elsewhere.

Band with a cause
The band’s involvement in creating music and video initiatives for cause-related issues such as corruption, moral policing and voting reveals a nerve of Bangalore and its people. The TAAQ members see its involvement with causes as a way of responding to the events around them, which they consider is inevitable for an artist. For them, engaging with causes is a way of expressing themselves.

TAAQADEMY, is a result of the band’s name TAAQ with an addition of the word ‘academy’, however I initially read it as takka-di-mi and the band members reveled in the many meanings the name evokes. The studio space at TAAQADEMY is aesthetically appealing, with red brick walls and no cement. It is technically perfected for recording. Expert sound engineer and acoustic designer Didier Weiss, from Auroville has designed the studio. The free-floating walls actually stand on rubber in order to make the space sound-proof.

Small portions of the area are cordoned off in order to isolate sounds from different musical instruments. The recording space is available to individuals and bands for hiring for Rs. 500/- per hour. That musical instruments are offered for use by the Academy is an added advantage. Traveling musicians have been using this space to jam.

A small gallery shows pictures of the different phases of the construction of the studio. And another one portrays the construction workers with musical instruments forcing one to take a closer look at it. This is done in order to remind us of the otherwise forgotten labourers who build all our spaces for us, says Divya Joseph, the manager of the band.

The academy hires other musicians who teach as faculty and currently there are about 120 students. A small store of musical instruments and accessories is on its way to expansion-more instruments will be added soon.

Sakala – Is Government going beyond promises?

Sakala may not be faster than Bangalore One, but the government guarantees that your job will be done. Here’s how.

Weavers who have been selling bamboo products on the footpaths of Bangalore Gayanasamaja, KR Road for the past 28 years will now have to find another place to continue their business.