Nature is sometimes only as far away as one’s window! Here’s the view from an apartment balcony: 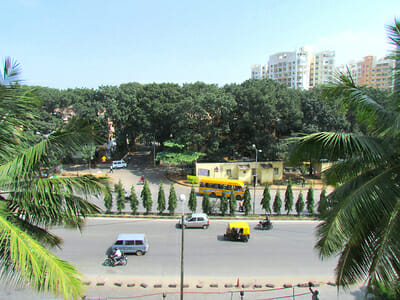 I can see four kinds of trees. Pic: Deepa Mohan

One can see the roads and transport and one can also see four different types of trees in the picture.

Framing the photograph at right and left, are some of the most common trees in India, the coconut palm. What a wonderful tree it is, with every part of it being useful to us…the palm fronds used for thatches, brooms and pandals for auspicious occasions; the coconuts being useful as one of the few drinks that cannot be adulterated, and is very nutritious; the trunk being used for both wood and boats!

On the median in the road are what are called Mast trees….they grow tall and straight like masts, and are often useful in breaking the force of the wind. They are often called Ashoka, too, but it is "Faux Ashoka", since the real Ashoka trees (you can see them at Lalbagh) are spreading trees with flowers and fruit.

Across the road, next to the small Traffic Police Station is a Jungli Badam tree. It is from this tree that our Badam (almonds) trees have been cultivated. This tree, too, has the same fruits…but they are likely to be much more bitter. This tree was planted after the Rain Tree on that spot was cut down for road-widening…and already gives welcome shade, with its broad leaves and spreading canopy.

Behind the Jungli Badam are a row of beautiful Mahogany trees, which are often planted as an avenue tree in our city. The Mahogany is known for its hard, termite-resistant wood, used in making furniture.

It’s surprising how an urban scene can give us so much of information about trees! We have many kinds of trees in our city, and Lalbagh has many kinds of trees brought from all around the world, too. Trees, and the life they support, are fascinating to know about!

The NRK Layout Resident’s Welfare Association voluntarily took a task of correcting errors in the electoral list of their polling booth.

Last week’s roundup covers a collection of photographs by Shahid Datawala and paintings by Pratima Mulani.