In the case of a citizen’s death during a Fire Department mock drill on February 24th, the Police have filed an FIR under Section 304A of the IPC (death by negligence) and are investigating. The case was based on a complaint by the victim’s brother against fire department. Section 304A is bailable and carries maximum sentence of two years imprisonment with or without fine. 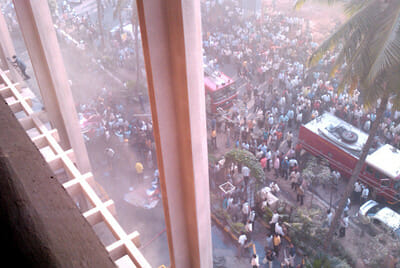 Lawyer Mukund T S confirms that prosecution can be under Section 304A itself, as there was no intent to murder. “The incident was caused by negligence only, hence the more serious Section 304 – culpable homicide amount to murder – will not apply. Since the accused were not appointed directly by the government, them being government officials will have no bearing on the case,” he says. Mukund practises under lawyer-researcher Harish Narasappa of the non-profit civil society organisation Daksh.

The victim, C R Nalina, aged 25, had died during a mock drill held by the Fire department in her company Bombay Rayon Fashions Ltd (BRFL) in Peenya Industrial Area. Nalina had volunteered to demonstrate descending down a rope from the third floor window of BRFL office. The drill, in which about 1000 employees had participated, was to prepare employees and Fire Department officials in case of a fire.

Just as Nalina was suspended in the air, the rope that was tied to her snapped and she fell. Having suffered serious head injuries, Nalina was declared brought dead at Panacea Hospital in Basaveshwaranagar. A postmortem was done at MS Ramaiah Medical College.

Nalina, a Labour Welfare office at BRFL, used to reside in Kodigehalli, and was originally from Gouribidanur in Chikballapur. She had joined BRFL one and half years back, after completing her Masters degree in Social Work from Anupama College in Basaveshwarnagar. Her parents, Ramakrishna Reddy and Lakshmidevamma, are farmers at Gouribidanur. Chief Minister and BRFL have promised Rs 1 lakh and Rs 5 lakh compensation respectively, to the family.

The rope used on Nalina was old and made of coir, instead of nylon. The coir rope is said to be purchased four years back and was not tested before it was used in the drill. No safety net was used to cushion the fall, as required.

Ravi Kumar, Inspector at RMC Yard Police Station, who is investigating the case, says that arrests will be made soon. “We have identified the responsible officials. We cannot release further details now,” he says.

Last week Kumar had given a different version to Citizen Matters. He had said that he did not know the names of the officials and that Fire Department had to give that information. However, A R Infant, Director General of Fire Department, says that police are free to take action as per their investigation. “Police has not approached us for any information,” he says.

Kumar says that investigation will take more time as they are awaiting a report from the Forensic Science Laboratory (FSL), Madivala. “FSL report will give material evidence, such as quality of rope used etc. We are also collecting eye witness testimonies,” he says.

Ravi Kumar and DCP (North) H S Revanna say that the FSL report would take long. “There is a long list of pending cases with FSL. We cannot say when their report will come out,” says Revanna. Chargesheet will be filed once the report comes out.

Meanwhile, Fire Department is holding an internal inquiry on the incident. The report was to come out within a week of the accident. Infant says that it would be submitted in a day or two. Newspapers had reported that soon after the incident, fire department suspended four officials – Devaraju, K Narayanaswamy, Marianna and Nizar Ahmed. Infant says that further action will taken based on the report.

Soon after the incident, fire department officials had tried to avoid responsibility, saying that many fire drills have been held without safety net. BRFL employees staged a protest at the company the next day, demanding action against those responsible. Infant later admitted to serious lapses in the drill. Officials should have tested quality of the rope and arranged cushions on the ground as per procedure, he had said.⊕

CAG report says that the BDA did not care about renewing the ad contracts for five flyovers, or did not hand them over to BBMP.

IT employees cheated by fake company

ITEC expresses solidarity with aggrieved IT employees of M/s Electrosys Solutions India and demands to arrest the culprits who committed Rs. 1.5 crore scam.