Residents of Golden Blossom apartment in Kadugodi, Bengaluru, have gone to court against the builder for not providing promised facilities on time. In their petition to the state Consumer Disputes Redressal Commission, residents say that Golden Gate Properties Ltd (GGPL) had promised them about 35 facilities such as club houses, sports complexes, super market etc., but has not delivered most of these. They also claim that quality of construction of existing facilities is poor. 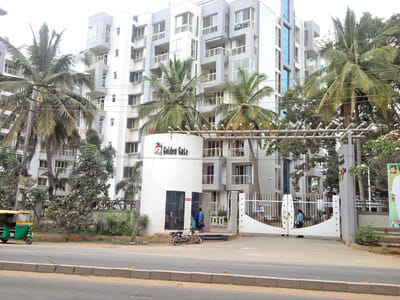 Golden Blossom Apartment Owners Association (GBAOA) filed the complaint in December. Hearings are on at Consumer Court to decide whether the case can be admitted there or be referred to higher courts. The case is also against GGPL’s sister concern Turnkey Properties Solution, that used to manage apartment maintenance and security.

Most of the flats in Golden Blossom were sold out in 2006-07. GGPL had advertised all facilities in their sale brochures, and also mentioned those in the sale agreements of many residents. As per the sale agreement, all common facilities were to come up within 12 months, and the clubhouse within 18 months, of handover of all apartments.

Residents waited for the amenities to be set up for the first few years. It was only much later – in 2010 – that they realised that the open space where the amenities were to come up, did not even belong to GGPL. It was land that GGPL had relinquished to BDA, and was in effect public land.

Builder had relinquished this area, measuring around 9100 sq mt, to BDA in 2005, even before it started selling apartments. Relinquishment was as per BDA’s rules which require apartment complexes to give up a certain percentage of their land for Civic Amenities (CA), parks and open spaces, for public use. While the owners’ sale deeds mention the extent of land that was relinquished, it did not mention which portion of land this was.

Residents’ demands
These are some demands GBAOA has made of GBAOA in their petition:

"There was no indication that the facilities were to come up in relinquished land. The price of the flats included that of the amenities also. We would not have bought the flats if there were no amenities," says Ajish Gopan, a resident. Gopan is one of the many disgruntled residents here. The 8-acre complex houses around 500 families. In addition to the association’s petition, about 50 more residents have planned to submit their individual petitions.

"There are 600-700 children in the complex, but they do not have play areas. All play areas and facilities like skating and basketball rinks are to come up in relinquished land," says Gopan.

GGPL, on its part, says that it has been trying to get the CA site back on lease from BDA. "When we applied for the lease in 2008, BDA did not consider it. There was confusion on whether BDA should lease the site to us or to other parties," says K Pratap, Managing Director at GGPL.

GGPL went to High Court and secured an order last July that BDA should consider GGPL’s CA lease application. BDA recently approved GGPL’s application for developing the club house in one of the two CA sites. Bhoomipuja for the clubhouse was done two weeks back. But residents are not convinced.

"GGPL has been giving us assurances for the last 3-4 years, and not fulfilling them. It may take some three more years for the clubhouse construction to complete. Besides, they are not setting up other promised facilities," say office bearers of GBAOA.

There are also other reasons for residents’ doubts. Some parts of the apartment already has huge cracks and leakages. Some facilities that have been already provided – such as the temple plaza – have deviated much from the original plan. Residents say that many flats were also handed over to owners after long delays. All these have been mentioned in the petition.

Deposits were not returned, says Association

Another issue raised in the petition, is on the deposits that builder had collected as clubhouse membership and maintenance deposit at the time of sale. This amounts to about Rs 3.6 cr. GBAOA says that builder has returned only Rs 50 lakh so far. They say that about Rs 3.1 cr is due to them from the builder. This issue came up when the association took charge of management in April 2010.

One of the CA sites which is laying abandoned now.
Pic: Ajiyos Yohannan

Builder is supposed to handover all deposits when association takes charge. GBAOA officebearers say, "Builder collected club membership fee in the range of Rs 40,000 – 1.5 lakh, and average maintenance deposit of Rs 45,000 per person. Builders has been keeping this money with themselves for the last four years, hence it should be returned with interest."

Builder has been claiming that the maintenance deposit was used up when some flat owners defaulted on payment of monthly maintenance fee. GBAOA says that builder should have insisted on the defaulting residents to pay up – as is the practice – rather than drawing money from the common corpus fund discreetly. They say that they had never been informed about the corpus funds being used.

"Corpus is supposed to be used for exigencies only. Builder has not provided audited statements for any year till 2010 and we suspect they have misused the money," says GBAOA.

Pratap says that GGPL had not kept track as to which owners had defaulted payment, and hence for logistical reasons had decided to give the remaining amount to association. However, sale agreements mention this amount as ‘maintenance charge’, and not ‘security deposit’.

Other concerns are regarding the amounts that residents had to shell out for repairing faulty STP (Sewage Treatment Plant), fire safety systems etc. set up by the builder. Residents say they had to spend Rs 9.7 lakhs to repair the STP on getting a notice from the state Pollution Control Board. They also spent Rs 4.16 lakhs and Rs 3 lakhs to repair the fire safety system and access control system respectively, soon after taking charge. They say that builder had given only a small reimbursement even though much of the damage had happened while the builder was still managing the complex.

Pratap says that GGPL is not to be blamed for this, as the STP was handed over to the association in perfect working condition, and that fire safety system was misused and damaged by residents. He is confident that the case will not stand in court. ⊕

BBMP’s budget is all fiction

BBMP financials is in a disarray, it desperately requires an external audit. It does not know what it owns and what it owes.

The number of COVID cases in Bengaluru has been sharply rising of late. The city’s commercial establishments do have some safety measures in place, but are these enough?

A tree is hacked on environment day

A tree planted by my children 15 years ago was decimated and mutilated on Castle Street, ironically on World Environment Day.