She spotted a dying lake, took up the initiative and brought it back to life. Given the opportunity, she would escape to a far away place on a fellowship, to do something she has always loved, writing stories. She seems to have mastered the art of getting books published after she authored ‘Get Published!.’ From writing short stories, she moved to writing novels and has even translated some of Tamil poet Subramanya Bharathi’s works. We are talking about Usha Rajagopalan, 55, Chairperson, Puttenahalli Neighbourhood Lake Improvement Trust (PNLIT.) 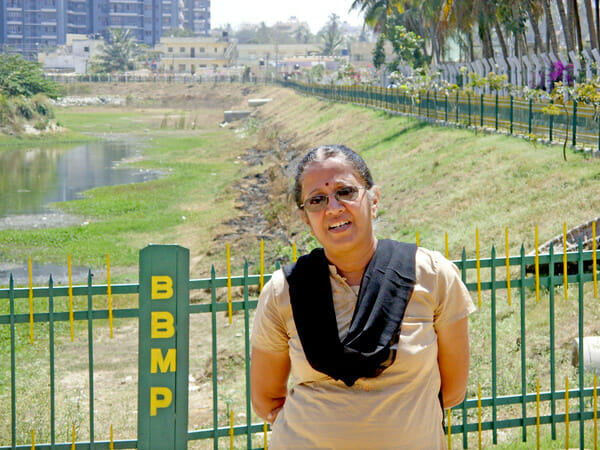 What made you start writing short stories?

My grandfather would ask me to read books and write a one page summary on each of them. It was a very exciting thing for me to do. Writing short stories was encouraged by him. I have been writing since then. I had an uncle who would buy a book every month for me. I owe my writing skills to my grandfather and my uncle.

How did your first book come about?

Once I started sending my short stories to competitions, slowly one by one they were getting selected. Three of them even won the Commonwealth Short Story Prize. It was then I thought of getting a book published with a collection of all short stories. I thought as most of my short stories had won prizes, it was easy to get them published in one book. I was wrong. Only after going from publishers to publishers that I realised how difficult it was to get someone to publish your book. I thought I should write a book on it. My 1st book ‘Get Published’ was on how to get a book published, it is like a manual for first timers.

PNLIT activities at the lake

We try and involve as many people as possible to come to the lake. We conduct simple things like the ‘Weekend Gardening.’ It is where parents come with their children to do a bit of gardening at the lake. It is such a pleasure to see those little children with their miniature diggings tools, trying to do something. We have a special birthday scheme here, where neighbours are invited to come for a walk at the lake by the person celebrating his/her birthday.
We also conduct the Nature Walk where we ask schools to bring in their student for a visit at the lake.

After writing short stories, I wanted to write a novel. Once when I was surfing channels on television that a image of two Somali children struck a chord in my mind. That lead to me to write my novel ‘Amrita.’ It is about Maya and her mentally challenged sister Amrita. The book also throws light on how a mentally challenged child is treated in the society.

In your translation work, why did you choose Subramanya Bharathi’s poems?

Where were you living before you moved in to Bangalore?

Before moving to here, we were in Manipal a for a brief time. Then we planned to buy a property and settle down in one place. We selected Bangalore. It was then, we bought a house here in South City. This is the first house that I can call it as mine. I had never owned a house before.

Tell us about your family.

I live here along with my husband Rajagopalan, 56. He always thinks that going on fellowships is like going on holidays, which i do not agree. I have two children, both of them are working now.

What led to the PNLIT initiative?

It was never planned. In 2006, when we moved in to South City, our balcony was facing the lake. I think it was only because I used to see its pathetic condition everyday, I felt there was a need to save it. I always say that if our house was facing the other side, might be I would not have done anything at all for the lake. I call myself an accidental activists. The lake’s poor condition started bothering me. It was just a puddle of dirty water. The lake was dying. I strongly felt that something had to be done. That is when I started looking out for help. The PNLIT was formed much later.⊕

Sachidanandanagar residents had to resort Gandhigiri again in less than seven months, to make sure they got the remaining khatas and plan sanctions.

“Have you no architecture of your own?”, was the remark by a Russian delegation in 1951 that triggered the making of the city’s legislature building and showcasing Indian architecture at its best.

“Land should be pooled not sub-divided continuously”

Mohan Rao, an urban planner tells Citizen Matters the real reasons for why so many Bengaluru layouts don’t have water supply and why buses are forced to run on 9-metre wide roads. He is clear about the solutions too.