Reeth Abraham is one of India’s most well known athletes participating in the hurdles, long jump and heptathlon events, with a career that began in 1976. She has won various medals at several international competitions including at the Asian level. Her achievement stands out particularly since she won a medal at the Asian level less than a year after she became a mother. 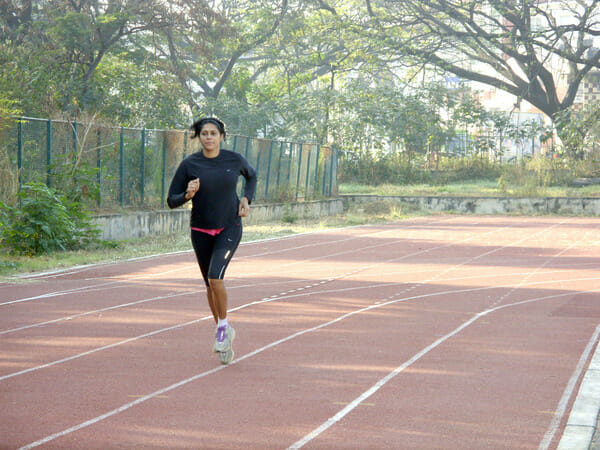 Reeth, at one of her practice sessions at Kanteerava Stadium.
Pic: Deepthi M S

Although she retired from competitive athletics in 1992, this 49-year-old has continued training over the years and is now active as a Masters athlete. In 2011, she won 2 medals for India at the World Masters Athletics meet at Sacramento, USA in the triple jump and long jump events. Among various awards and recognitions she has received over the years, she has been a recipient of the Arjuna Award in 1997. She is one of the founding members of Clean Sports India. Reeth lives in Koramangala.

Citizen Matters caught up with her for a brief chat at the Kanteerava Stadium, just after she had finished her day’s training.

Reeth, enough is known about your career as an athlete but only last year, your achievements at the World level as a Masters athlete caught our attention. How does one even qualify?

Clean Sports India is an organisation founded to rid Indian sport of its twin malaises, lack of sports persons in administration and drug usage. Clean Sports India aims to get former sportspersons into managing the various sports bodies in India including the Olympic Sports Federations, Associations and other Clubs in India, as opposed to administrators who have occupied positions of influence in various bodies without the sport itself making much progress. Its other objective is to ensure clean competition by keeping drugs away from both practice and competition.

This was my sixth appearance at the World Masters meet. One has to first qualify at the State Masters meet, for which you can just turn up and then the National meet, which you get to if you are successful at the state meet. If one is good enough and successful at the national meet, you get to represent India at the global level. The Karnataka state meet was held in Mandya recently. The World meet is in Brazil next year. The World Masters meet is held every two years. One needs to be over 35 years to be eligible as a Masters athlete.

How did you manage to train and keep in shape while raising two kids (Reeth is the proud mother of a daughter and a son)? Do you go to a gym regularly? What is your current training schedule like?

(Smiles) I don’t know how I managed. It just happened. I would sometimes leave my kids under the care of someone while I trained. It wasn’t easy but somehow I managed.

I train at the stadium 3 days a week and train in a gym on 3 days a week. I also swim occasionally for relaxation.

In addition to your involvement with the Nike Run Club, do you coach any athletes?

No I don’t have any trainees. There is not much time left on hand between my job and my own training outside my work hours.

You were recruited by a bank years ago. How has the situation changed for athletes on the sponsorship front?

I was amongst the first batch of athletes recruited by Corporation Bank. This was followed by various other banks later, which recruited various sportspersons. Some banks even had cricketers in their ranks. It is still very difficult for most athletes to eke out a living without sponsorship. That is one reason most athletes these days give up after a certain level since they don’t have the patience to put in years of hard work, which may or may not result in success. And even when one is successful, the recognition one gets may not mean much monetarily. Even as a Masters athlete, I have managed to get a sponsor for my travel to the World Masters meet but I am not sure how other athletes manage.

One of the things I have noticed at the Kanteerava stadium is the significant number of talented girls who are training as athletes, which is not quite reflective of the trend of India’s senior athletes. Where do they disappear as they grow older?

Reeth is one of the coaches at the Nike Run Club (NRC), an initiative from Nike to introduce ordinary people into running. Reeth helps the NRC attendees warm up through a routine of various exercises and then go for a run, before cooling down and helps various runners get introduced to the sport and get better at it, every Saturday at the Kanteerava stadium.

The problem is that as these kids grow older they have several options before them which are sometimes more rewarding. And as I said earlier, not all of them are willing to invest the effort and work hard for 10-12 years before tasting success at higher levels of athletics, especially when their hard work elsewhere can lead to success in other areas. And athletics after a certain point is extremely competitive. So I can see the perspective of the kids if they choose to focus elsewhere.

If you could change something in Indian athletics today, what would it be?

Make it enjoyable for young athletes to participate and compete. Once one reaches a certain level of competition, it is very challenging for an athlete to handle the pressure to perform and win medals. In my time, there was no one to help us on such matters.

What are your opinions on sports facilities in Bangalore?

In Bangalore, it is gradually improving. There are more people who are taking sports seriously.

You are a resident of Koramangal, what do you think of the sports facilities there?

Speaking of sports facilities in Koramangala, it is zero. I see no changes at all, the Koramangala indoor stadium for that matter, is used only for exhibition and nothing else.

Any message for aspiring masters athletes?

Unless you have been an active athlete earlier, events with throws (shot put, discus) and jumps (long jump, triple jump) are out, since they require special training and may result in injuries, if one doesn’t train carefully. Perhaps long distance running is an event a beginner can aspire to compete in.⊕

Bengaluru is once again toying with the idea of introducing pod taxis. But it is at best a fast mode of personal rapid transit, with limited and low carrying capacity. Neither will it provide last mile connectivity. Do we have better alternatives? Ashish Verma explains.

Theatre for a non-violent youthhood

Coming from an economically backward background, Aruldass found theatre to be an empowering experience. He uses the same to help youth to steer clear of violence filled life.

The signal’s coming in very clearly; if you are a mother you cease to have claims on public space. If you are crazy enough to want one then you are on your own.