The uniqueness of the event lay in the fact that it was not only about Indian writing in English but brought together creative writers from regional languages as well-they were read directly and were translated in English as well. On day one, 10 February, the panel on ‘City in Literature’ saw some free-spirited and open discussions amongst five eminent writers, Anjum Hassab, M K Raghavendra, Zac O’Yeah, K R Usha and Saniya. 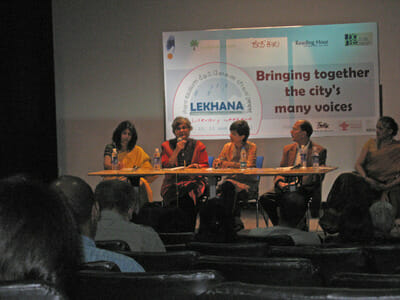 They each asked why the city is becomes important to writers and whether it necessarily needs capturing with writers offering different opinions. The city, for some, was merely incidental to their work. Anjum Hassan noticed that capturing the city is a relatively new event in literary history. Literature-lovers will have reveled in the discussion of writers who insisted that there was a sense of displacement and loss, of late, which had forced them to acknowledge the city.

"What you see is what you get" said K R Usha, on Bangalore and its soul. Usha is the author of Monkey Man, a novel set in Bangalore. Just when everyone was wondering which works captured the city in Indian fiction, U R Ananthamurthy reminded the audience of the works of DVG and others in Kannada. He said that Vidyarthi Bhavan, World Culture, Koshys and India Coffee House probably represented Bangalore, when someone in the audience mentioned that these were the ‘four icons’ of the city. The panel was followed by the play, "Five Grains of Sugar," a play by Manav Kaul. The play persisted in its metaphors long enough to make them believable.

Day two of the literary fest began with a session on Translations as Conversations. Panelists, Giriraj Karadoo, Lakshmi Holmstrom, Rahul Soni, Arshia Sattar and Vanamala Vishvanatha, disagreeing and arguing their takes on translation and ideology. This was followed by the session, Writing about Writing chaired by Anjum Hassan. The panelists, Vivek Shanbhag, Samhita Arni, Sumana Mukherjee and Rahul Soni discussed forms such as book reviews, histories of literature and the spaces available to write about writing.

The next panel by Naresh Narasimhan and S Diwakar saw discussion on the culture elephant -in this there was an emphasis again on Bangalore as a city and the various issues encountered in making Bangalore a better space for people to co-exist in.

A final session on new writing in Kannada saw the panelists, Vivek Shanbhag, Jayant Kaikini, Raghunath and S R Vidyashankara share with the audience what they saw as new writing and told us why. They located trends within it. Kaikini’s crisp and spontaneous speech was fun. He is a Kannada poet and author. Kaikini noted how images get updated from time to time and how criticism competes to keep up with the situation. His anecdotes that illustrated why Bengaluru was a ‘roopaka’ rang true.

Kaikini advised young writers to adopt the stance of ‘chintanasheela tanmayate’ or thoughtful yet complete sensory involvement in their subject matter. He distinguished between the preoccupation of literary artists with the ‘now’, ‘new’, changing and contemporary as against the right wing preoccupation of the ‘history of man.’

Day three began with the panel, The Joys of Short Fiction, with writers discussing the scope, style and characteristics of this form. Another panel ‘The word and image’ discussed relationships between verbal and visual languages and their representations in terms of art history and recent art works.

The next panel, What stops us from saying What We want to say, saw discussion on issues such as censorship, the state, law and engaged with artists on how they perceive forms of censorship and where they locate it. The issue, according to Ashish Rajadhyaksha, director of Centre for the Study of Culture and Society, lies between the spectrum of self-censorship and a complete refusal to adhere to any form of censorship.

The panels ran alongside readings in Tamil, Kannada, English, Danish, Hindi, Malyalam, Marathi and Bangla. The monotony of the panels, if there was such a thing, was dispelled by the funny skits by Sangam Play House. There was a corner for Book Exchange. That people could take home free a book by ‘saying thank you and promising to read it’ was so much fun. Upon giving a book, you could take two books from the pile. Phew!

Book lovers, the poetry-crazy, theatre-enthusiasts, filmmakers, artists, professional writers and publishers were all under one roof. But the best part was that people outside the literary spectrum too came to find out what ‘Literature’ was all about. Bangalore could do well with more such inter-lingual, multi-form fests.

Do not crib that government is not doing anything. Here are some groups and organisations to inspire you to do your own bit for Bengaluru.

Why does every election leave the affluent and educated voters unmoved? Could it be that some of them see no need to vote?

Poisonous plants in gardens and homes

Many of us have small gardens or even potted plants at home, to add a touch of greenery and, as we hope, to purify the city air.  Houseplants play several beneficial roles in our home