"Yeaah!! St Louis, here we come," chorused the NXTremers – a team of 6th and 7th graders – thumping their fists, huge grins on their beaming faces, as they struggled to keep their feet on the ground. They had just been declared the national level champions in the First Lego League (FLL) 2011 competition.

Their next step will be the FLL World Festival in St Louis, Missouri, USA on April 25-28, where they will represent India.

The young champions are a group of six friends studying in National Public School, Indiranagar – Aditya S M, Anuj Tambwekar, Arnav Mhaske, Chaitanya Sindagi, Pranav Prabhas and Shriank Kanaparti. Their coach Vijay Sindagi holds a master degree in Computer Science, and had been a professional in the semiconductor industry (at Texas Instruments and Infineon) before he dedicated himself to organic farming two years ago. 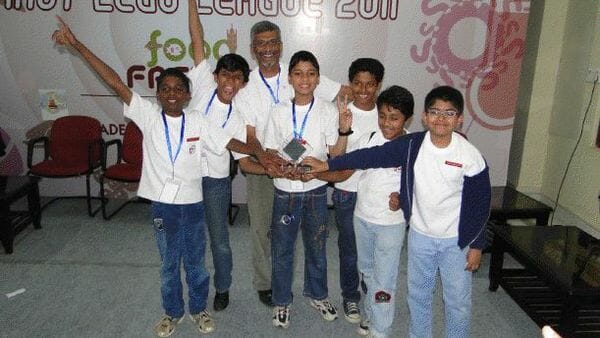 National champions were declared by comparing results of the top teams in the four regional rounds. NXTremers were winners at the regional (South India) level round held in Bangalore on January 21st. They had competed with 46 teams here and won the trophy for ‘Best Robot Performance’. The other regional level competitions were in Gurgaon, Mumbai and Chandigarh. Overall, 80 teams from across India had participated.

The championship trophy is recognition for the team that exhibits strength in all FLL areas, including its core values of teamwork, research, robot design and performance.

FLL is about more than building a robot. It is a global programme to get children excited about science and technology. A hands-on event for children in age group 9 to 16, it uses real world scientific problems to engage children in research, problem solving and engineering. It emphasises friendly sportsmanship, learning and community involvement.

Each year the challenge is based on a theme and has two parts – the Project and the Robot Game. Teams of upto 10 children guided by an adult coach participate in FLL. The theme for 2011 was ‘Food Factor’ with focus on detection or prevention of contamination in food.

NXTremers presented a way to detect contamination of mangoes caused by calcium carbide, that is used for ripening. They worked for three months to (1) research and identify a unique solution to the problem (2) design and program an autonomous robot with pre-designed missions to be executed in 2.5 minutes (3) exhibit their teamwork skills.

For the Robot Game, the team used special kits by Lego which contained a variety of Lego blocks, programmable processors, sensors and motors – using which a robot can be built to
accomplish missions – and a specially designed mat.

Good luck champs! The learning has been as valuable or more as the winning. It is indeed an experience to cherish for the teams and their families who have developed strong friendships through the journey.

About Sharada Satrasala 1 Article
The author has not yet added any personal or biographical info to her or his author profile.

Satish Reddy has a lot of unfinished jobs in his constituency, particular in HSR Layout. Lot of hopes are pinned on him that he will fulfill all his promises made during the campaign and work

Popular science: Sky is the limit for Bengaluru

Yes, we’ve been over the moon lately. But are Bangaloreans taking advantage of the city’s premier science institutions? Here’s a checklist.

In view of rising COVID cases in Bengaluru and other districts, Karnataka State Disaster Management Authority imposes restrictions to contain the virus.