The Bellary road toll fee protest might have fizzled out quietly, but what may have gone unnoticed was the use of forceful language in the transport union’s flyers.

The Federation Of Karnataka State Lorry Owners and Agent Association chose strong and retaliatory language at NHAI’s decision to impose tolls. They termed it ‘A daylight robbery by NHAI’ in their flyers.

The association further claims in its flyer as to how NHAI has violated its own rules by setting up a toll gate within 10kms of the BBMP limits and by collecting toll fee before the completion of the road.

"It is in their own guidelines that they (NHAI) cannot set up a toll gate within 10kms of BBMP limits’, says K Radhakrishna Holla, General Secretary, Bangalore Tourist Taxi Operators Association, who supported the protest.

Summary of the latest 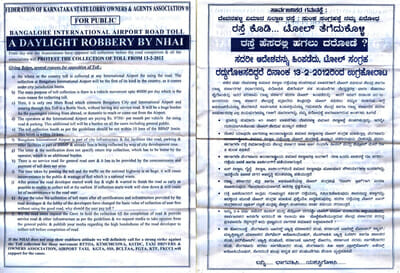 The hard hitting notice printed by the lorry owners association about NHAI’s intransigence on toll collection.

A number of associations of lorries and cabs went on a strike on 13 February, as they were opposing the collection of toll fee at the NH 07 Sadahalli gate toll, which leads to the Bengaluru International Airport.

Around 500 drivers and owners protested at the toll on 13 February. However, there were cabs who did not support the cause, that were functioning. Around 70 of the protesters were arrested and then released the same day.

The NHAI authorities had started collected Rs. 25 as toll fee from the 10 February for cabs. "They have not even completed the construction of the road, they should not have started taking money," says Holla.

R Neelakantappa, Secretary, KSTDC Drivers Welfare Association, claims that the road is illegal, as it does not follow norms like providing a service lane. He also points out the present road is the only road that connect the city to the BIA and leaves them with no alternate routes.

The collection of toll fee has caused taxi drivers to worry as they are forced to bare the charges. "The passengers pay as per the charges fixed for kilometres, things like toll fee and airport parking fee are paid by us," says Devaraj Achari, from Magadi, who is a driver and an owner of 3 taxis. Archari has 4-5 trips to the BIA everyday and has an extra expenditure of Rs. 200- 300 everyday.

In a flyer distributed by the Federation Of Karnataka State Lorry Owners and Agent Association, it is explained that on an average, every taxi driver spends Rs. 9750 per month for parking fees and other fees at the BIA.

Holla further explains that drivers from nearby villages are forced to stay in the Airport even when they are given 4-5 hour break, as leaving the premises and coming back costs them. "Most drivers depend upon their day-to-day earnings for the living, it is getting very expensive for them," he adds.

The associations have placed a proposal to the NHAI authorities to introduce a monthly pass facility instead of the Rs. 600 pass for 50 trips, that exists.

Commercial transport is using the toll gates for now, and the associations have planned to take the matter to the Chief Minister. ⊕

BMTF still exists and is still working. But there are less complaints made to BMTF than before. What is wrong?

Why Koramangala looks like a war zone: Five ongoing projects in 4 sq km

With five major infrastructure projects, and several smaller ones, Koramangala resembles a massive construction site these days. Neither the hapless residents nor the authorities are clear about the details of these projects, or why they are needed at all

Healthy lakes have always been critical for happy ground water levels. A recent report authored by Bangalorean specialists exposes a deteriorating situation and shows how the lakes must restored.