So have you started him on finger foods yet? The lady at the park asks the question pointing towards my nine month old. Since I’m debating the best zigzag (and breeziest) route to take the stroller around so that he goes off to sleep, I take some time to answer. Yes, I have started to give him finger foods. At the moment, it’s Parle G. Someday I will graduate to ‘well cooked carrot sticks’ as mentioned in those parenting tomes. Until then he can nibble on biscuits in between meals if required. Oh yes, and I forgot his finger, which he loves to chew on. The best part? It’s attached to his body and cannot be swallowed. 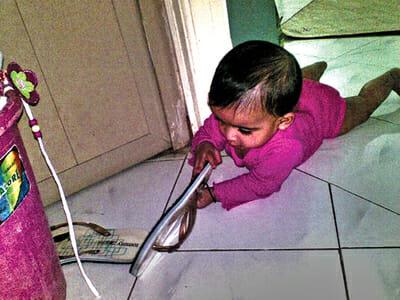 When my older son, now six, reached the finger food stage, I went rather overboard and made him healthy teething biscuits/cookies made with oats after looking up the recipe on the internet. It would of course be mashed to smithereens the moment he found an available and reachable surface to bang it on but the point wasn’t the biscuit. The point is that I actually took the trouble to bake it.

The teething biscuit isn’t the only thing that’s different. I have also become the queen of shortcuts. The eating solids ritual for the first brat used to be an elaborate one. The highchair used to be pulled out, a bib would be put around his neck and I would proceed with storytelling, facial distortion, colourful toy parade and several other routines to get him to eat his mashed up stuff. Nowadays, I just walk around with the baby in my arms or plonk him anywhere available and safe. As long as the food is finished, who cares where he sat…on top of the sideboard or on the highchair.

So this time around the story is a different one. Simply because, I’ve been down that road before and know things that have to happen will happen, despite your best intentions. Earlier, I scrubbed a toy to an inch of its life, if it fell on the ground when the older one was small. All I do now is to wipe it on my dress and hand it back. The little one needs to build immunity, doesn’t he?

If the first kid is a joyride, the second one is a roller coaster ride with more loops and turns than you had ever imagined. But it is also a revelation about yourself. Since I was the most paranoid mom around with the first one (still am to an extent. Old habits die hard), I was rather happy to discover that I’m more laid back this time around. I don’t call up the pediatrician at the drop of a hat; don’t obsess about the quantity of food taken each day (he’s only a baby. They have small stomachs, I tell myself) and don’t buy every cute primary colour toy I spot.

So now with two boys, I may have permanently lost out on rest (for a few years, anyway), me time and the ability to keep the home spic and span but I seem to have finally become a relaxed and hopefully more sensible mom, thanks to the fussy eating, runny noses, upset tummies and other innumerable mini battles of the past six years.⊕

“Pourakarmikas are our defence against corona; here’s how to keep them (ergo all of us) safe”

Pourakarmikas are our first line of defence against COVID-19. But they don’t have the right equipment, facilities to maintain personal hygiene, or health check-ups to ensure they’re neither infected nor unwittingly spreading the disease.

Researchers and academicians say that BBMP’s road widening plans which is resulting in tree cutting, is unscientific and unsustainable. Is anyone listening?

Bringing the bands back to Bandstand

The bandstand at Cubbon Park was once a meeting place for the city’s music lovers. Read on about an NGO’s efforts to revive its musical weekends.