‘Great films will be made only when we become great audience’ are the words that greet you, as you enter Suchitra Cinema and Cultural Academy. It was a film society when it was started and gradually over the years it has unfolded itself to other forms art like, music, dance and theatre. 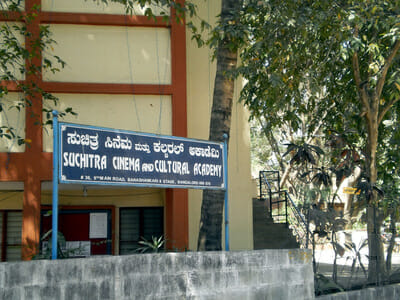 View of the academy in Banashankari. Pic: Deepthi M S

Built in the 80s, Suchitra Cinema and Cultural Academy in Banashankari, has retained its green element. With an auditorium of its own, a few classrooms, halls and an open air theatre, it is one academy with all facilities to attract an art lover.

Suchitra has been known to be the pioneer in bringing world cinema to its audience. The society holds screening of selected international movies regularly at its auditorium.

One for every art lover

Since Suchitra’s primary interest in cinema, the Suchitra School of Cinema and Dramatics Arts are offering post-graduate programmes in film direction in collaboration with Gothenberg University of Sweden.

The academy also has Suchitra Bal Jagath, the division which conducts programmes for children like painting classes and quiz competitions. Suchitra also hosts special screening of movies for children during the summer camps.

Over the years, as Suchitra has developed into cultural hub, Suchitra Kala Kendra takes initiatives in holding many cultural activities such as dance classes, lectures on selected topics and Harikathe. The academy also promotes Kannada literature through various events.

How it all started

It was back in 1971, a time when people considered cinema as just an option for passing time, that Suchitra embarked on its journey. "People did not take cinema seriously then," says Subba Rao V N , Chairman, Managing trustee, Suchitra Cultural Academy.

A few cinema enthusiasts were looking out for a place to watch movies of their choice. That was the urge that lead H Narahari Rao along with his friends Raghavandra Rao, G Venkataswamy, P V Rao and Muddana to start a film society. All of them were engineers with great love for cinema.

"It all began in a small garage in Chamarajpet," says Subba Rao taliking about the beginnngs of the the film society. Belawadi Nanjundaiah Narayana or more popularly known as ‘Make-up Nani’ was instrumental in starting the film society, as he put all his effort to make sure that the society does not die.

It started as a forum where a bunch of selected movies from around the world would be screened in one of the theatres in Bangalore.

In 1977, they conducted ‘Nostalgia’ a festival of films from the golden past. It had 70 films in 8 different languages in 8 different theatres. It ran for 2 weeks in Bangalore.

"We had invested Rs. 500 and the turnover was Rs. 2 lakhs," says Subba Rao as he beamed with joy, remembering the past. The movies were screened at Kapali theatre, one of the biggest theatres then, he added.

The members of the film society had been to Bombay, Madras and even Hyderabad loking for the film festival. The plan was to rope in popular film stars from the Hindi Industry to the attend the event. To members’ utter surprise of Suchitra, plan turned into reality. 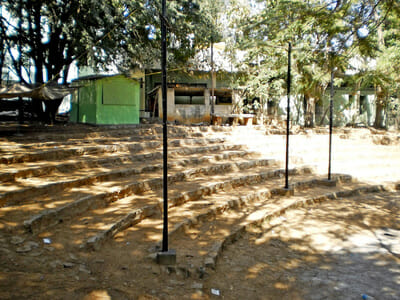 Among the popular stars from Mumbai were Nargis, Mrinal Sen and Devika Rani. Along with these stars were 30 popular figures from Kannada Industry were called in.

With this event being a huge success, Suchitra’s popularity soared.

In the year 1980, the members felt that there was a need for a proper premises for Suchitra. "We were asked to select from 40 sites from different parts of Bangalore, and we randomly selected this place," says Subba Rao, referring to the present location, in Banashakari.

Soon they were allotted a civic amenity site. Satyajit Ray was called in to lay foundation to the site. However, they were faced with financial hurdles to construct a building.

Meanwhile, they started conducting ‘Chitrabharathi- a pick of Indian cinema,’ where selected Indian movies were screened at Puttana and Bal Bhavan Theatres, as they had no screening space of their own.

Make-up Nani, initiated the ‘Buy a Brick’ idea. People wanting to help Suchitra, were asked to buy a brick, in order to contribute in constructing a building.

The story goes that Dr Jeevaraj Alva was a guest to a function at actor Shivram’s house, spotted  Suchitra’s campus, learnt about their financial conditions and offered his help to complete the building. In 1986, Suchitra became the first film society to have it’s own screening area.

"It is the only public forum which has high potential to nurture art. It is both local and global," says N Vidhyashankar, trustee Suchitra Cultural Academy. Suchitra has given due space to all forms of art, he added.

The credit for organising the Bengaluru International Film Festival too goes to Suchitra. "We would like to organise more such events," says Rao. Today, it conducts numerous classes, seminars and discussion forums for the city’s ardent art lovers.

The 41 year old institution makes the space welcoming for every art lover.⊕

Hegde vs Yeddyurappa, the people won

Chief Minister Yeddyurappa’s being asked to go following Justice Santosh Hegde’s report is a win for citizens who have supported the Lokayukta. Here’s why.