In the commoditised world, if you don’t like the price of a shirt or even a car, you can shop around to your hearts content.

Schooling though is a different cup of tea altogether. It is an investment parents make for their children, and certainly no commodity. So when private unaided schools increase fees regularly, parents will simply not automatically move out in a hurry. Switching costs time, energy, money and stress on children.

Some parents straightaway suspect that they are being exploited because they’re not about to change schools at the drop of a hat. In market economics, this is called ‘stickiness’ of a customer base. Vendors can exploit this with ‘predatory pricing’. Other parents would like some control on fees, even as they don’t want government interference. 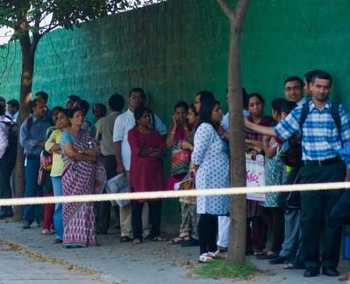 On the other hand, it is equally true that private schools are setup with by people who are clearly not in for charity. They have a mission of education that is both commercial and entrepreneurial in motive. Secondly, there is a real gap between the massive demand for quality schooling and actual availability of schools and seats.

The result is a complicated mess of feelings and a touchy topic.

Citizen Matters has been hearing from Bangaloreans worried about particularly steep hikes. Last month, we decided to do a dipstick survey of parents views on this and spoke to several schools too. The findings reflected significant worry. See this article here.

The state government, so far wary of taking issue with private unaided schools appears to have fired the first shot recently.

"The Karnataka government has fixed a 30 per cent profit margin for private schools. This after parents protested against the alarming rise in the admission costs", CNN-IBN reported on its website a few days ago. Tuition fees should not exceed a profit of 30 per cent and schools cannot charge any non-tuition fees up to class five, a government circular reportedly said.

The report has also quoted commissioner for public instruction Tushar Girinath as saying that the government has considered the fee structure and then taken a decision.

The government’s move appears to come as a result of the efforts of an association of city parents taking up the issue.

"The only solution to this problem where the parents are not put to trouble, is by the government implementing the uniform fee structure across the state," says A R Ashok Kumar Adiga, President, Bangalore Schools Parents’ Association. Kumar spoke to Citizen Matters as part of the survey on fee hikes. Adiga is the founder of the association.

Ashwin Mahesh, who led ABIDe’s Right to Education working group for the state government during 2010-11, promptly pushes the debate to a higher ground. Mahesh is against government regulation of private unaided schools in principle, arguing that it will stifle school entrepreneurship.

"The core problem is the quality of the public (government) schools", says Mahesh. Shortage of quality schools overall is leading to this situation, he notes. "Parents should pressurise the government to create more quality schools", instead of asking the government to intervene in private school pricing policy. "The number of people setting up new private schools may go down", he adds, as a reaction to fee caps, which could in turn hurt access.

Settled or not, this predicament is soon to get worse. RTE admissions are not yet under enforcement. If schools start doing this in 2013-14, low-income students will need to be accommodated, and fee hikes will only get steeper, worry parents.

For now though, the battle is going to be on the fee cap order and very likely in Karnataka High Court.  ⊕

Which school board for your child?
How to choose the right school?
Will private schools allot 25 percent seats for poor children?
‘Do not push RTE into all unaided schools’, says ABIDe
Shock and worry in 2012: school fee hikes

Can the new BBMP Bill improve governance in Bengaluru?

State government has drafted a BBMP Bill, exclusively for the governance of Bengaluru city. But can this new law solve Bengaluru’s myriad problems?