January 29th was a bright Sunday morning for us, a group of around 30 enthusiasts. We had gathered at 8.30 am in front of Someshwara temple for Halasuru Parichay, a heritage walk conducted by INTACH, Bangalore Chapter.

Sathya Prakash Varanashi from INTACH (The Indian National Trust For Art and Cultural Heritage) and Dr Aruni from ICHR (The Indian Council of Historical Research), Southern Region, took us through the Parichay.

The Parichay was divided into two parts – the first on Someshwara temple and the second on Halasuru settlement. Dr Aruni, in his parichay of the temple, explained three distinct stages in the development and modification of the temple. This was inferred through the difference in the stone texture and carvings.

The dwaja stambha would be used as a flag post as well as to light lamps. The bali kallu in the temple was higher than in most temples. This is a decorated stone upon which a small portion of the offering to the God is placed for birds.

The temple has two Nandis – one at the second dwaja stambha and a more imposing one near the entrance to the navaranga. The practise of using Nandi to convey a message to Someshwara by whispering in his ear is being followed till date.

At the entrance to the temple, on either side are carvings of Ganga and Yamuna to sanctify us. The temple provides historical evidence of beliefs and practices of people in the region through times.

A man carrying a jackfruit on his head indicates that jackfruits were integral to the way of life and substantiates its influence on the name Halasuru (Halasina Hannu – jackfruit in Kannada).The temple also has stone carvings of the nava nathas. Dr Aruni also showed us Kinara and Kinari carvings which are male and female forms fused with birds – these he said are akin to the heavenly messengers (angels).

The Kamashamma temple beside the main Someshwara sanctum has a mid-level panel running around the outer wall that depicts Girija Kalyana (marriage of gods Shiva and Parvathi). During April this temple participates in the famous Halasuru pallaki utsava, with a pallaki for Kamashamma. Pallaki is a car decorated with jasmine buds – its fragrance heady in the April heat. Most of us were awed by two towering cannon balls trees (called linga pushpa in Kannada) in the temple premises.

A house with colonial and Tamil influence in Halasuru. Pic: Rupa Rao

In April 2010 the Kalyani or water tank associated with the temple was excavated. Dr Aruni talked about how the wine and medicine bottles found dumped close to the tank had helped infer the 1898 plague outbreak in the region; the outbreak had triggered the British to close the Kalyani. However, now there is no path connecting the temple to the Kalyani due to houses that came up in between.

We were running way behind schedule when we came out of the temple and immediately proceeded with an introduction by Sathya Prakash on the Halasuru settlement. In early 1800 when the British came down to establish a cantonment in Bangalore, they invited people to relocate here to take on mid-level jobs to support the cantonment.

With the British having established themselves in Madras Presidency, many Tamil-speaking people relocated here, and the British planned and developed Halasuru for them.

The Halasuru settlement being more recent (19th century) when compared with Bengaluru Fort (16th century), has streets and footpaths that are broader, along with an underground sewerage system. The three main streets of Halasuru are Bazaar, CAR and RK Mutt. These are intersected by roads named after prominent early settlers of Halasuru. 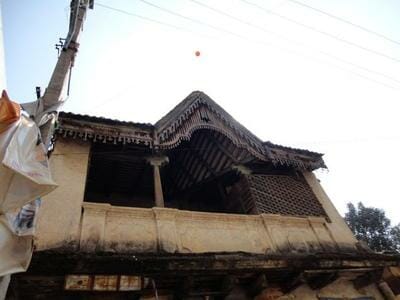 This roof is designed to keep monkeys away. Pic: Rupa Rao

We spotted a few houses in the lanes that are over 100 years old with local, Tamil and European influence in their design.

While we were walking through the lanes, Halasuru had clearly woken up and our slow paced walk in the narrow lanes caused irritation and curiosity. With permission we visited a couple of old homes with tiled roofs, and outer jagali (stone seats outside the house). Houses in the lanes open directly into the street.

Prakash pointed out that several small gudis (small temples) flourish in the lanes in addition to the massive Someshwara temple. This is perhaps to cater to specific beliefs and personal gods.

A little after 11 am, we bade goodbye to the group and made our way back with perhaps each of us reflecting on what we had learnt, experienced and imbibed. Issues on heritage and conservation are clearly important to all of us who attended the Parichay, however as Prakash pointed out we are all part of the change that is in conflict with heritage conservation.

Thanks to INTACH, Dr Aruni and Sathya Prakash Varanashi.

About Rupa Rao 2 Articles
The author has not yet added any personal or biographical info to her or his author profile.

What could be common to garment workers, transgenders, auto drivers, waste pickers and animal activists? They are all radio jockeys in Bengaluru’s one and only community radio! It’s a story of a decade of being a voice to voiceless.

Donation for the Orissa flood affected

Collection drive for clothes and money for the Orissa flood affected.

With the mall culture invading the city, many old hotels have lost their charm. Mavalli Tiffin Room was the forerunner among them that every old Bangalorean cherished once upon a time.