‘Varna Mythri – Centenary Retrospective 2011′ was launched in December 2011 to commemorate the birth centennial of artist Rumale Chennabasaviah. The retrospective is being held by National Gallery of Modern Art NGMA, Benglauru. 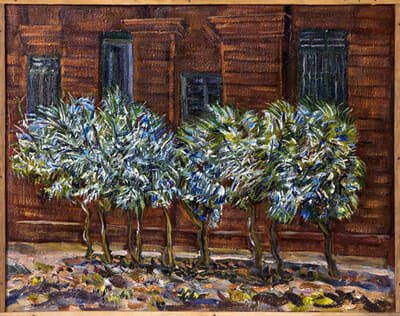 The programme was to end on 31 January but the date has been now extended. "By popular demand, the last date for viewing has been extended until 19 February 2012", shared Shoba Nambisan, the director of NGMA.

The programme included insightful weekly discussions by artists and art historians on Rumale’s paintings, landscape art and relevant subjects. While most of the paintings belong to the collection of Sanjay Kabe, Rumale’s foster grandson who takes care of the Rumale Art Gallery in Rajaji Nagar, the rest are from the Venkatappa Art Gallery, Vidhana Soudha and Bangalore University. According to K S Srinvasamurthy, the curator of the show, 8 rare drawings and 4 large paintings are among the key attractions.

To publicise Rumale’s work, BMTC displayed wraps of his paintings on two of its Volvo buse, while BBMP put up hoardings. 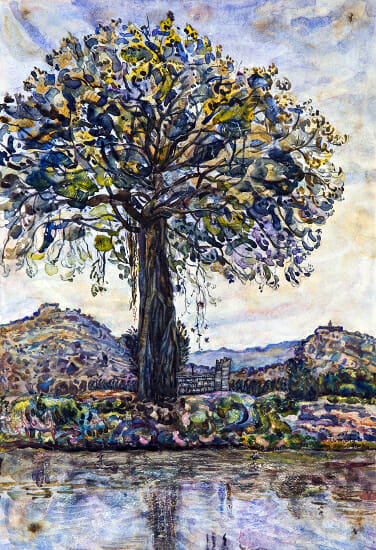 True to life depictions of the Garden City

Rumale captured the essence of the city’s verdant bounty, in many of his works and titled one of them as Varna Mythri. In fact, the vibrant hues in his major pieces like Gulmohar and Jacaranda make them realistic. The term Varna Mythri means "Friendship with Colour."

Born on September 10, 1910 in Dodballapur, Rumale had studied for a year and a half during at Kalamandira, one of the early art schools in Bengaluru. His talent became public when he submitted 18 paintings for display during the annual Dasara celebrations in Mysore in 1936.

In a Kannada interview telecast on Doordarshan after the passing of Rumale, the artist had said, "I am grateful to my elder brother for providing me the support to pursue a 3 year course at the Chamrajendra Technical Institute in Mysore. And encouragement from the great painter from Russia, Dr. Svetoslav Roerich, was valuable."

A committed Satyagrahi and follower of Mahatma Gandhi, Rumale was actively involved in the work of Seva Dal during the movement for Indian independence. The story goes that this great artist took a long break from painting on the request of the social activist N. S. Hardikar. He resumed his art work in the early 1960’s after a hiatus of nearly 30 years. 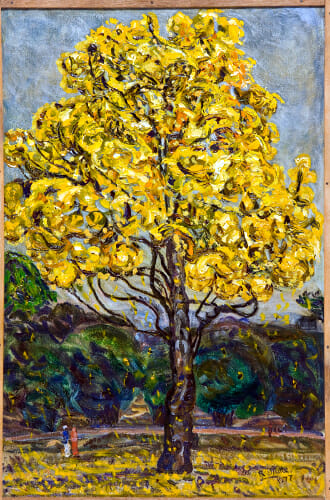 During the 1970’s and 1980’s, Bangaloreans regularly spotted Rumale steeped in bringing out his creations at parks, street corners and famous locales. He has portrayed the floral blooms inside Cubbon Park and those near the High Court and St. Peter’s Seminary.

The philosophy of truth and simplicity supposedly influenced Rumale’s art. Using watercolours and thick brush strokes, he produced masterpieces of landscape and still life paintings. Unsurprisingly, the works of Rumale have been compared with those Impressionist legends such as Claude Monet and unique artists like Vincent Van Gogh.

Apart from making portraits of people he knew closely, Rumale has some "Untitled" sketches with pen and pencil. "The line drawings are an interesting contrast to his other works", remarked Radha H S, a writer for children based in west Bangalore.

Rumale’s repertoire contains paintings of the Trincomalee water front in Sri Lanka (then called Ceylon), the Central Railway Station in Chennai (formerly Madras) with its red sandstone spire, natural settings in Hampi, the Vrushabhavati river and the busy K R circle in the city.

Who are the candidates for Padmanabha Nagar this time? How has the sitting MLa performed? What are the problems of the constituency?

Startups under the lens

The first lesson of entrepreneurship is integrity – the power to deliver one’s commitments. A team of IT professionals came to this conclusion at the end of making a documentary on entrepreneurs.