‘A Brush With Nature,’ her first solo exhibition of wildlife art was organised at No. 1 Shanti Studio at Shantinagar. The exhibition was on from 27th January to 30th January. 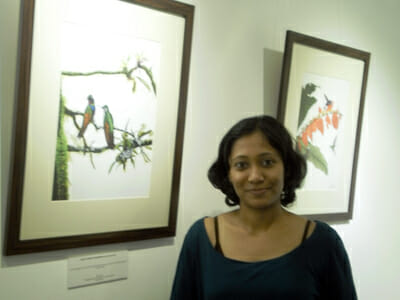 Sangeetha along with her collection at the exhibition.
Pic: Deepthi M S

The exhibition which ran for 3 days saw a lot of wild life enthusiasts attending the event. "The spirit in the Leopard’s eyes are so real," says, Atrijit Dasgupta, 45, who claims to have an average interest in the wildlife.

The exhibition had around 24 of her collections, which included pen, acrylic and watercolour. The exhibition also had her sketch book for display.

After her graduation from Chitrakala Parishath, with a specialisation in painting, she started working as a freelance artist. Her first project was in 2005, for Government of Karnataka’s Tourism Enterprise- Jungle Lodge and Resorts, where she had to paint a wall poster.

Sangeetha, who is in her late 20’s, had just 2 weeks of time to prepare for her exhibition. She says, "it is encouraging to see so many people turning up at the event."

For four years, Sangeetha has been working on a collection of illustrations of hummingbirds for a coffee table book called ‘Hummingbirds.’ A large number of her paintings of hummingbirds which were selected for the coffee book, were displayed at the exhibition.

Another avid nature admirer, Usha Ramaiah, 70, says, "She has done an incredible work in presenting wildlife through her paintings." She also added that children should be encouraged towards wildlife paintings, as it brings some amount of awareness about wild animals and birds.

Sangeetha who travels to various wilderness areas, sanctuaries and national parks, finds Turahalli, a small village off Kanakapura road as an easy escape from the city.

She believes that the most important aspect of a wild life artist is to get people to look at nature as it is. As an avid observer of nature, she says, "most people don’t observe nature, they just pass by it."

"Once, people look at paintings, they develop a liking towards it. And that creates a bond between them and nature," she says.

Speaking of painting as a profession, Sangeetha says that here in India, people think a lot before buying a piece of art. However, she says that she has been able to survive so far. After her first project, she joined Felis Creations, a visual arts company with a focus on conservation.

That’s where she started working on her second project, a coffee-table book about ‘Hummingbirds’ in collaboration with the Grogas Science Foundation, USA.

Explaining the history of this profession, she says that it was in great demand in the colonial times, but gradually declined later with photography taking the lead.

As a wildlife artist, her works are true to life. "There is no modification in the way they look or the way they are presented," she says.

Sangeetha who is also a regular bird watcher and trekker, says a lot of senior birdwatchers have inspired her to take up wildlife illustrations seriously as a profession. Her brother Sandesh Kadur, wildlife photographer, documentary film-maker, has been her biggest support and also her critic.

Along with illustrating wildlife, she also conducts workshops for children. She feels that once children start looking at nature closely, they start observing it more consciously. "It builds a relationship between them and the nature, that is a very important thing," she says. "I see so much of interest in kids, people are showing a lot of interest it this profession," she adds.

With only a handful of such wildlife illustrators in the country, Sangeetha hopes to see more. "It would be nice have some competition," she laughs.

The rock on which Bengaluru sits

Did you know Bangalore sits on a big rock? This rock is one of the oldest exposed rocks in the world.

Raintrees provide shade and keep the carbon emissions in check. But it would be difficult to plant them now as they need too much space. We have other species that can line our roads. But not having trees is not an option, says Dipika.

Bengaluru was one of the first cities in India to adopt technology for traffic management. But the number of traffic police personnel here is woefully inadequate