The Bengaluru Habba featured the staging of Robert Bolt’s A Man for all Seasons. For those of us not familiar with Bolt’s name, he was an Oscar-winning screenplay writer and playwright, who wrote the screenplays for Dr Zhivago (one of his Oscar efforts) and the legendary Lawrence of Arabia.

His other Oscar came from the screenplay adaptation of this play, A Man for all Seasons. The play for the Habba was stage directed by Arjun Sajnani, who is of course known for the high quality of his productions that include Fire and Rain and Tughlaq. This play was no different in terms of production values. 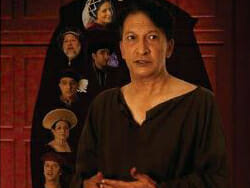 Bolt’s writing of the play is stunning. Pic: A man for all seasons

The play depicts the true story of Sir Thomas More, the 16th century Lord Chancellor of England, a devout Catholic who refused to endorse King Henry VIII’s wish to divorce his ageing wife Catherine of Aragon in order to marry his mistress Anne Boleyn. Again, for those who wonder about Sir More, he was an English lawyer, philosopher, statesman, and noted Renaissance figure who gave us the word Utopia or paradise.

The play deals more with the idea of identity and conscience, and More is the ultimate man of conscience. He is true to his beliefs under all kinds of pressure at all times – in fact, a man for all seasons.

The actors all have good stage presence. Ashok Mandanna, as More the constant man whose righteousness sets him as a polar opposite to the slippery natures of Cromwell, Rich and Norfolk, is coldly and distantly elegant. Naval Narielwala, who plays King Henry, makes a brief and energetic appearance.

The woman characters of Alice and Margaret are ably supportive, although they seem unable to rise beyond their relationship with More. Roper, Chapuys (Stanley Pinto) and Norfolk (Ashish Sen) are all relatively minor characters that lend to More’s saintliness. The action is not really dramatic, but the play works well because of the actors’ ease with their lines.

The lighting and music adequately support the play. The costumes are entirely period, except for the Common Man’s black costume. The set is elegantly constructed; the construction is such that a series of pillars with an arch can easily be made to look like a house, an inn, the jail, the court, the riverbank, and finally, the gallows.

The highlight is when the arch is lowered to become a series of steps from which the king enters and exits. The props and the smaller pieces of the set move smoothly in and out without the audience noticing it. The Common Man uses the movement of the sets to engage the audience in conversation while simultaneously acting in the play and commenting upon the characters.

However, it is Bolt’s writing that is stunning. While it takes a little while for an audience to understand and grapple with an alien history, once you grasp the broad idea, the dialogues and the plot hook you and beat you relentlessly to a pulp with their pace, emotion, drama, and fire.

The first ten minutes last a while, the rest of the two hours disappears in ten minutes. The sheer power of the words is enough to hold you; the action merely becomes a superficial touch. And this is the sense one gets at the end; the play is elegant and smooth. It merely flows from one scene to the other while the dialogues and ideas wreck havoc on your mind.

It strikes you that the real difficulty in the play is to ensure this smoothness while staying out of the plot’s relentless pace. This is what the actors do well; they stay out of the way by being adequate. The play is a must watch to see how a great writer’s mind works with respect to plot and dialogues. At least, you must go watch it to count yourself as having watched another good Sajnani production.

Who plays traditional board games like alugulimane nowadays?
Well some enthusiastic people did just that this weekend in a board games tournament.

What is the best way to shop for school supplies?

Shopping for a new session at school can be a fun-filled exercise, at the same it could teach your wards some life skills.

Puppetry, dance and music on a Sunday evening

Bringing back temples into the cultural fold, Gudiya Sambhrama, provided young and old with options other than television on a Sunday evening.