Filmmaker Girish Kasaravalli has won hearts and stimulated minds for a few decades now. Ghatashraadhha to Gulabi Talkies, his films have won him great accolades. He offers interpretations of the stories he chooses, something not usually done by directors. Citizen Matters caught up with this resident of BTM Layout for an interview.

I see a shift in your film-making. Recent films, especially those after Gulabi Talkies seem to be explicitly ideological in nature. They ‘tell’ more than ‘show’, I think.

What do you mean when you say ‘ideological’? My films have always had a political-social message, if you like. It has been there from the very beginning. My early films have dealt with issues such as globalisation and liberalisation of the economy. Then there was a different kind of theme dealt with, in Thayi Saheba. Then Gulabi Talkies took up the issue of religious institutions quite directly. People are free to take home from my films what they like.

As a resident of BTM Layout, what do you think of the area?

I came here in 1992 and the layout was calm and quiet then. The roads were clean too. Today it is yet another extension and the traffic is unbearable. The problem with BTM Layout, as with most other areas in Bangalore, is that there are no parallel lanes. Also the BTM Main Road is the only road that connects several areas such as Jayanagar and Silk Board; this makes the traffic heavy.

I think that the city planners need to do more. Kengal Hanumanthiah planned for straight roads that started from Vidhana Soudha and led to other places. This plan has not been followed by later planners at all. Parks, of late, are a welcome relief. But it is not that there are too many parks or large parks. 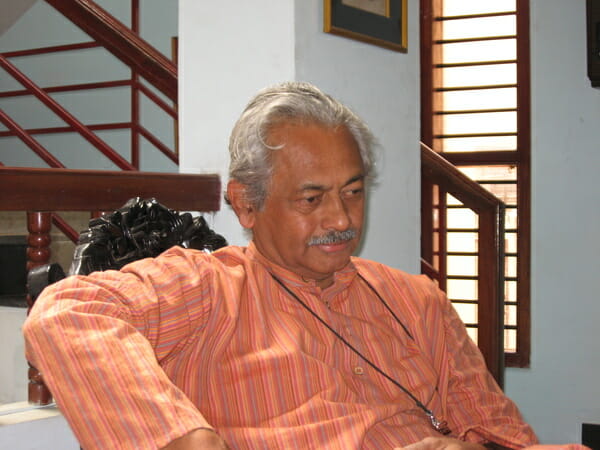 There are not enough cultural spaces in the city, says Kasaravalli. Pic: Sushumna Kannan

Of late, apartment buildings crop up on any relatively big site. Two sites are joined and lo, there is an apartment! This is a menace, because such buildings consume enormous resources and hinder the life around them in several ways. How many such apartments should be allowed and where they should be built is a matter that the planners need to be clear about.

I personally think that Jayanagar 3rd and 4th block are well-planned. It is puzzling, however, that layouts that emerged only recently, do not even imitate the older ones. The emerging layouts and extensions are only worse, what explains this?

There are also many malls coming up now. And as to how many malls are needed in a residential area is not regulated. In JP Nagar, there are three new malls, one beside the other. What purpose does this serve?

In BTM layout, there is another problem. Roads lead to dead-ends and wide roads suddenly become narrow roads leading nowhere. I think the authorities take the approach of waiting for an area to develop first, before doing much. They then seek to widen roads causing much inconvenience. This probably gives them some kind of kickback!

Are there enough cultural spaces in BTM Layout?

There are not many. A new auditorium is now being built as part of a temple. And then there are a few places for music concerts. But there are few spaces which can generally be seen as promoting cultural pursuits. There were no talkies or cinema theatres even, for people to watch films in BTM Layout, until the recent Gopalan Mall.

Rangashankara in JP Nagar caters to some of these needs. These nearby areas are viewed as our cultural spaces, especially since Jayanagar is close by. But the problem is that wherever there are cultural spaces, there is more than one. Cultural spaces are only getting more and more concentrated; new ones emerge close to an existing one. This is somewhat peculiar since it does not cater to people belonging to different areas.

Which of your films address the problems faced in cities?

Mane is an early film that takes up the problem of industrialisation quite explicitly. It records the experiences and perceptions of those with an agrarian background who come to inhabit a city. The film is not simplistic in its presentation—this is something you will find in all my films. Kraurya is another film that is set in Bangalore in its second half; it deals with urbanisation a bit.

Does Kraurya present the urban as cruel in relation to the rural? I am trying to remember the film, I watched it years ago.

No, this film too can be seen as capturing the experiences of people who come from different spaces and encounter the city. There are no binaries such as the urban and the rural; one is not upheld in an opposition with another. I avoid such binaries in my work.

He signs off talking about his new film Kurmavatara. He says the film is about a man who wants to play the role of Gandhi in a tele-serial – a simple life begins to get complicated.

Is it time the chicken came before the egg?

Can skywalks be made convenient and safe?

The right design for underpasses, flyovers, and skywalks is critical to make the city roads accessible to all. Anand Sirur explains what can be done in Bengaluru.

Self medication or self harm?

The world is full of first aid boxes containing drugs that can be harmful if taken unsupervised. It cannot replace a doctor’s advice.