Politicians irrespective of their party line shared their concerns about looming water scarcity that is fast approaching Bangalore and pledged their commitment in support of the action plan prepared by two city NGOs. The Centre for Policies and Practices (CPP) and Bangalore Environment Trust (BET) presented their plan at a conference on “Bangalore’s water famine 2020 A ticking time bomb” held on 29 January at Gandhi Bhavan. 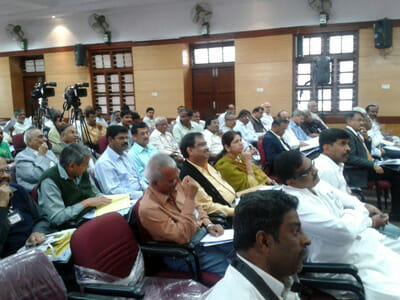 Pic: The event organised by the Centre for Policies and Practices and the Bangalore Environment Trust. Pic: Kishore S U.

CPP and BET have proposed a detailed action plan to address water scarcity in Bengaluru and in the context also of the city’s ever expanding population. At present, the population of Bangalore is 85 lakhs. This is likely to be 1.26 crores by 2020 and 2 crores by 2030. The city is expected to receive 1,425 mld (million litres per day) of water after completion of last phase of Cauvery scheme in 2012, which cannot be increased as per Cauvery tribunals allotment of 19 tmc ft. I.e. Cauvery water supply for the city is capped at 1,425 mld permanently.

Of this only 925 mld will be available for domestic purpose in BBMP area, as 50 mld is for non-domestic purposes and 45% is unaccounted water. “This gives per capita availability of 93 lpcd (litres per capita per day) for population of 1 crore, which may go down to 73 lpcd by 2020. This is much lesser than Government of India norm of 150 lpcd in metropolitan cities and the shortage will only keep increasing,” said V Balasubramanian, Chairman, CPP. (V Balasubramanian, former additional chief secretary and a retired IAS officer, was also chairman of the Government of Karnataka’s Task Force for Recovery of Public Lands. He published a hard hitting report exposing several land scams in the state and Bangalore in particular.)

CPP and BET have pointed out that number long-standing issues need addressing to fix water scarcity:

The action plan also estimates cost for various components of above steps to be Rs 24,000 crores and suggests mode of funding through World Bank/ Japan Bank for International Cooperation / Asian Development Bank with its attendant supervisory disciplines in execution. It also proposes supervisory and coordination committee to implement action plan under chairmanship of Chief Minister, Bangalore in charge Minister as vice chairman, government officials and civil society as its members.

No naysayers amongst politicians

Politicians who participated in the discussion were in support of the proposal and praised CPP and BET’s efforts in bringing a serious problem to limelight and planning a strategy to fight it. Politicians appeared to be united at the meeting to resolve the imminent crisis.

Participating in the discussion, Congress leader and former legislative council chairman B L Shankar said water conservation and protection of lakes is collective responsibility of political class, officials and public.

“No political party or politician should make evacuation of illegal encroachment a political issue, government should immediately call meeting of local bodies and public representatives and take a decision on all these issues,” he added.

BJP MLA from K R Puram constituency Nandish Reddy advocated that a time frame has to be fixed for completion of projects. Development and protection of lakes should be given the first priority.

“We politicians should take moral responsibility for today’s situation we have allowed or neglected illegal encroachments for vote bank politics,” he said.

Most BBMP corporators who participated in the debate including Deputy Mayor S Harish (BJP) complained about increasing number of complaints from public about improper water supply and suggested for a stronger coordination between BBMP and BWSSB. “Every one targets BBMP, when it is BWSSB’s responsibility address issues related to water,” he said. Some thinking has to be done on providing water to new layouts, malls and apartments he added. 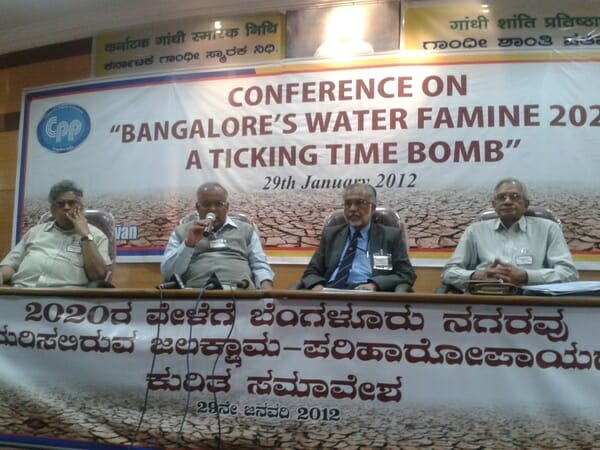 Urban development minister Suresh Kumar (BJP) in his concluding remarks after keenly following the discussion said that the government is already working on development of water sources to Bangalore city; several plans and work are in progress to address the need of water to Bangalore.

Kumar also made a commitment to introduce Lake Development Authority bill in the next budget session probably in March and see to that it becomes an act.

A meeting with Mayor, deputy mayor, leaders and officials will be called soon to discuss on a blue print for distribution of water in the city and a pilot project will be taken up to reduce the amount of unaccounted water, said Kumar. He also clarified that there is no plan before government to privatise drinking water.

“We know what the price of water is but don’t know its value, this mindset has to change, only then we can tackle this issue and conserve water to our future generation,” he said.

Will there be a will?

Political will to tackle the complex issue of water for Bangalore has always been a question.

“Time bound completion of projects and a strong political will is more important to address this issue of water famine as the time is ticking”, said M N Tippeswamy, retired Chief Engineer BWSSB and expert on water supply. “It is possible to sustain with present water but what we need is integrated approach towards all water resources”, he said.

Balasubramanian, however, is optimistic. “We see that there is a political will to fight against this ticking time bomb of water scarcity as public representatives themselves have honestly accepted the responsibility for the situation today,” he said.

P G R Sindhia (JDS), former industries minister and Director CPP, and Balasubramanian addressed the press after the conference. Around 150 representatives were present, they noted, including former corporators and MLA’s. There was support for the CPP-BET proposal from all the participants, they felt. ⊕

RELATED
About Kishore S U 1 Article
The author has not yet added any personal or biographical info to her or his author profile.

A lake festival requires coming together of officials from many departments and citizens, and a lot of planning. How did Bellandur lake see its first-ever lake festival? The full story.

Now the applications for BMTC student bus pass can be filed online and offline. Read more to know how to skip the queue and get the bus pass!