Chitra Santhe is held on the last Sunday of January, every year. This year over 1600 artists from all over the country displayed their work.

The number of visitors this year has gone up by about 50%. This could be because of more publicity feels C N Rudrappa the chief administrative officer of CKP.

The main motive of this event is to create art appreciation awareness, opines Bharat Candade, Management and Art consultant at CKP. Candade feels that such events provide encouragement for students, as they would be willing to sell their art cheaper. He adds that the general public does not buy art as an investment and hence, the cheaper the better. So a seasoned artist who makes a living out of his/her art finds pricing a problem. But students are willing to sell their art cheaper as they can recover the material cost or make some pocket money.

Events like this become a platform to showcase artist’s work, which means more than buying. Appreciation of art gives them thrill and confidence, believes Zakia Siraj, a visitor at the Santhe and a professor of Psychology. She also feels that this kind of movement provides good mileage to the artists. Agrees Roopa Puttaya, an artist from Bangalore , that such a platform provides great exposure and an opportunity to meet people and knowledge on how to run such a show.

Art galleries are small and more often than not distantly located. In many cases most artists cannot afford gallery spaces to showcase their work. Culmination of all art in a single platform such as this is superb, another visitor, says Gillian Murphy from Ireland.

What are people buying? 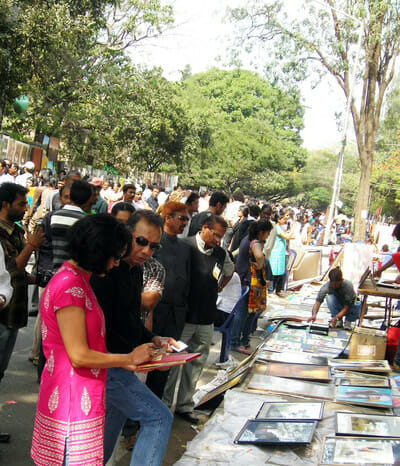 Even though the event saw some works, which seem like Ravi Varma lookalikes, the originality seems to be increasing, observes Sunil Baindur, creative director of Dentsu digital and an alumni of CKP. Baindur, also adds that more than the quality of a painting, originality should be stressed upon.

Based on the work sold so far,Rudrappa says that paintings which depict landscapes and have classical designs have more takers. Candade feels that common man’s art is "calendar art" – the designs he likes on magazines and calendars. Hence, similar patterns are what the buyers associate with. But otherwise buying art depends a lot on the mood, taste and the personality of the buyer and has very less to do with the trends.

Some of the bestsellers among the local crowd were paintings from Pravin Pasare from Kolhapur. Pasare’s detailing with the oil paints made the paintings look like photographs. The paintings were all sold out and were priced around five thousand rupees. Another exhibit which had many takers were the madhubani paintings by Mr. Ashok Kumar Das from Bihar.

The all day event also had live cultural programmes, shadow plays and flash mobs. The atmosphere at the fest had an unlikely yet pleasantly well fitting mix of the common man and art. Rudrappa simply puts it as -"a great confluence of artists."⊕

No teeth to fight terror

By most accounts, the city and state remain ill-equipped to fight terror. A dedicated squad is yet to come into existence, and all of Karnataka has only one bomb squad, which is stationed in Bangalore.